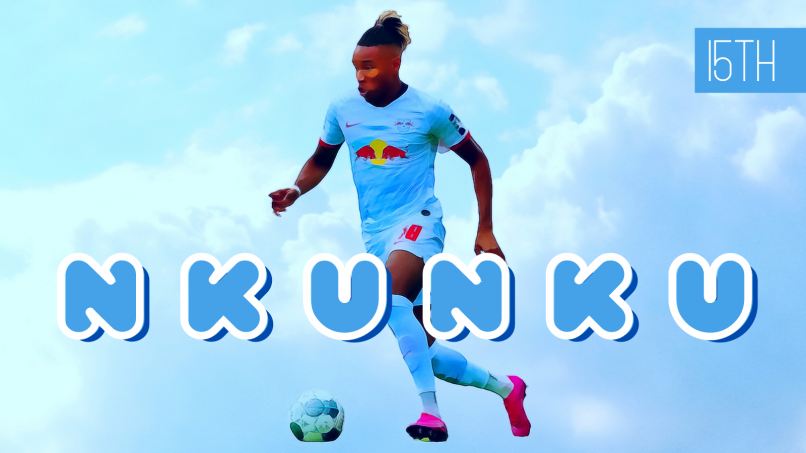 This article is part of GFFN’s French Player Of The Year Award 2021 countdown. Follow the daily feature series here on GFFN as we build up to naming the best French player in the world this year. Look out for 14th place tomorrow.

Christopher Nkunku’s season has been defined by being a consistently shining star in an inconsistent team. For a side that many tipped to compete for the German title, RB Leipzig has fallen well short of expectations. At the time of writing, they sat seventh in the Bundesliga after winning only five of their first 12 games. However, Nkunku’s performances have stood out. By the end of November he’d scored five goals and provided seven assists in those 12 games while also netting seven goals in five champions league games this season. A wonderful start.

For many, Nkunku’s performances will not be a surprise. After signing for Paris Saint-Germain as a teenager, Nkunku cemented his status as one of the most exciting prospects in France and, after fine performances with the youth team, he earned a spot in PSG’s first team squad. As most young players have found out in Paris, opportunities can be hard to come by. Over his three seasons in the first team, Nkunku played only 55 league games, many of them as a substitute. In his two and a bit seasons at RB Leipzig, he’s already played 72 Bundesliga games.

To get the required game time, Nkunku signed for Leipzig in the summer of 2019 for a reported £11m. This move was wildly applauded as Leipzig is a place known for developing young talents such as Timo Werner, Marcel Sabitzer, and Nkunku’s French compatriots Dayot Upamecano and Ibrahima Konaté. In his first season, Nkunku proved his talent and potential, recording five goals but impressively assisting his teammates 15 times in 32 Bundesliga games. Statistically, his second season was not as fruitful as he scored six goals and created a further seven goals, but there was a feeling that he was on the cusp of having a breakout year.

His third season has proven to be just that. In his first 20 games Nkunku has scored 13 times and added 12 assists across all competitions, impressively saving his most productive outings for Champions League games. Three of his seven UCL goals came against Manchester City away from home. Although Leipzig lost 6-3, Nkunku’s performance against one of the best teams in Europe impressed many.

It’s not just fans and pundits that have been impressed by Nkunku’s performances. RB Leipzig Head Coach Jesse Marsch said Nkunku “doesn’t have a weakness.” while his former manager Julian Nagelsmann explained, as the then RBL coach, that, “he’s versatile and has real quality in attacking one-on-ones. He also fits perfectly with our transfer DNA as a young player with great potential who can take steps forward, just like us as a club. He’s hungry for success and we’re glad to have him on board.”

Nagelsmann’s assessment of Nkunku is accurate. He’s been described as an attacking midfielder, but he has shown the ability to play in multiple positions, frequently playing on either wing as well as dropping into central midfield. He’s even played as a false 9. Nkunku’s standout performance this season came as a false 9, scoring and then assisting the winning goal to help Leipzig beat Dortmund. He was also awarded the man of the match award for his performance. Along with the multiple man of the match awards earned this season, Nkunku was also awarded the Bundesliga player of the month for October, beating the great Robert Lewandowski.

Despite Nkunku’s impressive performances and the quality he has shown, he has yet to receive an international call-up for France. France National Team Head Coach Didier Deschamps has made it clear that Nkunku is a player he has his eye on but, as of right now, they are prioritising continuity in the squad. However, it feels like ‘when’ rather than ‘if’ for Nkunku’s and Les Bleus.

If Nkunku continues to perform at this level a move away from Leipzig is likely. He’s already been linked with several bigger teams across Europe, including Manchester City, Arsenal, Real Madrid and Liverpool. If one of those sides were to realise their interest, they would be getting a player performing at a high level that is yet to fulfil his potential. Barely 24-years-old, Christopher Nkunku has considerable time to make good on that potential – a terrifying thought for his opponents.