FEATURE | From the Stands: Lionel Messi welcomed to Paris 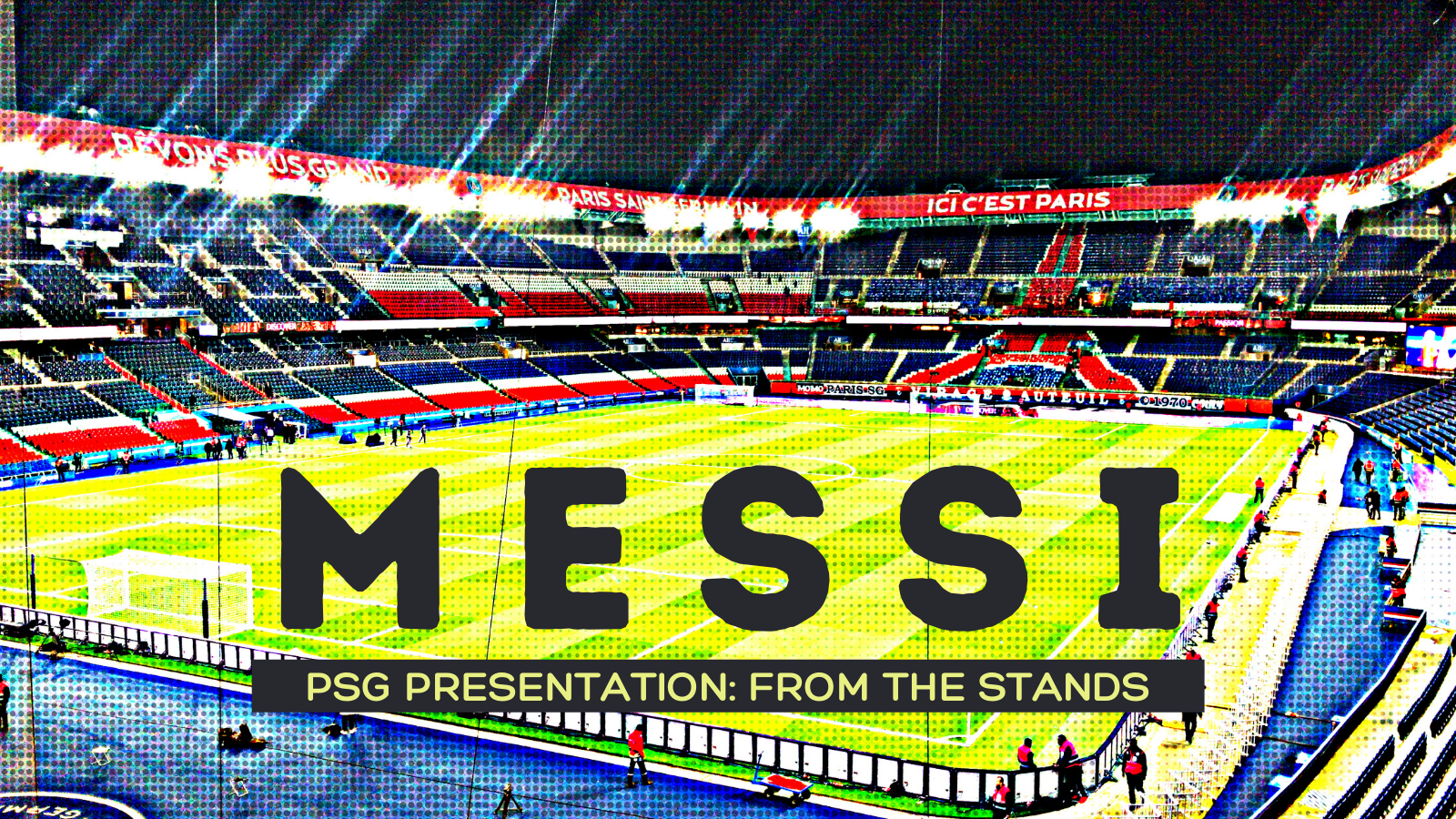 Everyone was in their seats an hour before kick-off. The new recruits’ presentation was an attraction as big as opening match of the season at the Parc des Princes itself, for the simple reason that it would be a first chance for most to set eyes on Lionel Messi as a PSG player. Even this GFFN reporter cut his vacation short to come back and take in the spectacle live, much like El Chiringuito’s star man Josep Pedrerol flying back from the beach upon hearing Messi had left Barça.

The clamour that welcomed the Argentine superstar completely drowned out his introductory words. As Messi spoke into the microphone nervously, like a schoolboy presenting to his class, shifting his weight from his holy left foot to his still-better-than-most-right-footers’ right foot, 45,000 fans roared as if The Beatles had just walked out on the pitch.

Forgotten was PSG’s dropped Ligue 1 title from last year. For a club like Paris, this is something more exceptional than a league title. Not to mention that there was the pleasure of finally seeing each other again, packed into a stadium, after 18 months of pandemic-related interruptions and closed doors.

This communion was propelled by a flamboyant first half during which the Parc buzzed. From cracking their first pyrotechnics seconds before kick-off to drawing upon the most boastful repertoire of chants as PSG went up 3-0 before the half hour mark, there was no end to the energy emitted by the PSG fans. The newcomer could only be thrilled.

Parisian fans now dream of the Messi-Neymar-Mbappé trio but an uncomfortable question places a shadow over this galactic collaboration. How many games will they actually play together? Neymar has missed around half of PSG’s games since his arrival, largely due to injury. Messi, for now, needs to catch up on fitness, but, at 34, is headed towards an age which could see him preserved more often.

As for Mbappé, how long will he even be at PSG? His contract runs out in one year and negotiations remain at a standstill over a renewal. The continued rumours of Real Madrid’s interest have some suggesting he might even leave this summer, even though PSG president Nasser Al-Khelaïfi has warned Mbappé he has “no more excuses” now that Messi has arrived.

For the 22-year-old, every action on the pitch received an amplified reaction from the fans. Loud jeers were heard in a divided stadium when his name was announced before the game while successful dribbles were met by whooping and did-you-see-that hand-waving from many. His misplaced backheels and flicks pulled exaggerated moans out of others. Stadium politics played out before everyone’s eyes.

And Mbappé knew he was not just playing a match against Strasbourg as he also nurtured this relationship with the crowd. In the second half, he signalled for more noise as he walked towards the corner flag which, with the corner in question being right in front the Strasbourg fans, earned him jeers of a different kind. Minutes later, as he delivered his second assist of the match from a cross in the same area, he turned back towards the crowd with a satisfied look, half in celebration, half ‘I told you so’.

That goal, Pablo Sarabia’s, brought PSG back to safety after letting Strasbourg reduce the three goal gap to just one in the second half. It seemed for a while after half time that PSG were falling into their all too frequent habit of complacency but Mbappé’s determination helped avoid any early season disappointment. The party wasn’t spoiled.

Meanwhile, those paying close attention could measure the progress made by PSG over the years. Up front for Strasbourg was Kevin Gameiro, one of the first signings made by Qatar-era Paris, now back at the club of his youth. He received quiet applause around the stadium after scoring one of the Strasbourg’s goals. But the age of Messi is markedly different from the pioneering conquerors of the early 2010’s.