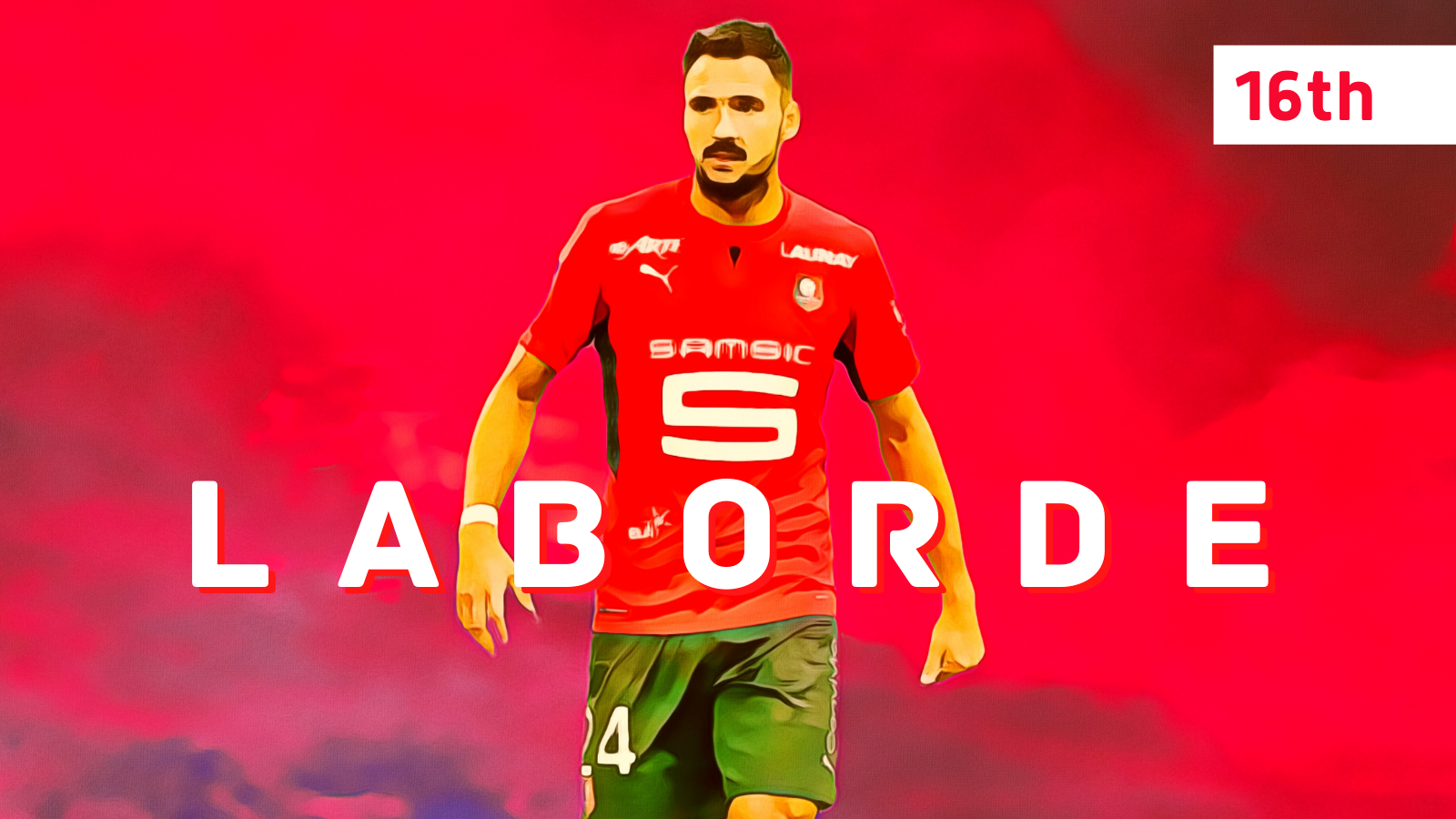 This article is part of GFFN’s French Player Of The Year Award 2021 countdown. Follow the daily feature series here on GFFN as we build up to naming the best French player in the world this year. Look out for 15th place tomorrow.

After a hat-trick in the Europa Conference League, followed three days later by the opener in a chippy derby against Lorient in late November, Gaëtan Laborde had amassed fourteen goals in twenty appearances this season and looks worth every bit of his €15m move from Montpellier to Stade Rennais. He first evinced his talent in the 2016/17 season, at Bordeaux, where he slowly moved out from the shadow of Jérémy Menez, scoring thirteen goals in all competitions. He had been a solid enough performer on loan spells to lower division clubs but, at 23, he was seemingly becoming less of an elite prospect but rather more of player best suited to life in the lower leagues.

While it’s true that André-Pierre Gignac and Olivier Giroud were also, if not late bloomers, very much not prodigious at a young age, Laborde’s career would then take a major step back the following season. While Menez (and Enzo Crivelli) had departed Bordeaux that summer, the exit of coach Jocelyn Gourvennec mid-season, combined with a metatarsal fracture that kept him out for more than three months, had hamstrung his season. Bordeaux had improved under Gus Poyet but he was often an unused substitute come season’s end, with Martin Braithwaite often preferred alongside Nicolas de Préville.

The following summer saw him leave his first club for Montpellier in a transfer that would ironically enrage Poyet and even hasten the Uruguayan’s departure. It was there that Laborde began to really blossom. Playing alongside Andy Delort in a 3-4-1-2, Laborde used his running and aerial ability to burnish the former Caen striker’s game and Montpellier were only kept out of the top five, and a putative European place, by a cruel defeat to Marseille on the season’s final day. Only the top four had better goal differentials and, under Michel Der Zakarian, La Paillade were beginning to look increasingly like one of France’s most attractive sides going forward.

In the summer, the club invested heavily, making Delort’s move from Toulouse permanent and breaking their club record to sign midfielder Téji Savanier from Nîmes. Despite that spending spree, and the additions of Swiss international goalkeeper Jonas Omlin and Dijon forward Stéphy Mavididi the following summer, Montpellier’s financial state, like many clubs in France, was put under threat by the pandemic.

As a result, when the proverbial glass ceiling of European play couldn’t be broken after three successive seasons, he and Delort were sent on their way this summer. Laborde joined a Rennes side who have shown ambition of late but were also in flux having parted with ways with once-promising young manager Julien Stéphan in March despite his having guided the club to both their highest-ever finish and the 2019 Coupe de France.

Stéphan had been replaced by Bruno Génésio, formerly of Lyon, and it made for an interesting combination. Génésio was a man thoroughly steeped in the milieu of the Rhone club, but had been derided for his tactical irresolution, even as he helped guide the club to a Europa League semi-final and regular participation in the Champions League. He had briefly been employed in China with Beijing Guoan prior to rocking up in Brittany. He thus seemed, if not an uninspired choice, at the very least a peculiar one. That said, his impact in Rennes was immediate, as the team’s only losses under his stewardship last season were to Bordeaux in a match in which they played with ten men for virtually the entire encounter, and to PSG and Monaco, both of whom were well battling hard for a place in the top three at the time.

This summer brought more heavy spending from chairman Nicolas Holveck, with Kamaldeen Sulemana, Lovro Majer, Loïc Badé, and Baptiste Santamaria arriving alongside Laborde. No club, save PSG, spent more than the nearly €80m that Rennes did, but things hardly had started smoothly. After a decent start, three successive losses in the league had left the team sixteenth. Even if injuries to Jérémy Doku and Majer had meant that the team were missing some key ingredients, it seemed that Génésio, despite the team’s considerable outlay in the summer, was perhaps not quite up to the task.

It was in Laborde’s third match with the club, having arrived at the eleventh hour from Montpellier, that things shifted. In a midweek round against a promoted Clermont side, Rennes put six past the Auvergne side as Laborde scored his first league goal for the club, playing on the right side of a three, as he had through much of his time at his previous clubs. Usually paired with another striker such as Menez, Delort or Martin Terrier as it was here, Laborde has rarely been used as a proper central striker. This had always been a curious choice, as Laborde’s work rate, aerial ability and overall physical presence make him a rather complete centre forward, but he’s never seemed unhappy in this role while becoming an adept creative presence, averaging roughly an assist every fourth match.

With Doku’s absence, though, and M’Baye Niang loaned to Bordeaux, Laborde became the best option to lead the line, playing for the first time as a genuine focal point, whether it be in a two alongside Terrier, or on his own with the likes of Sulemana and Benjamin Bourgieaud playing wide roles. No longer playing a supporting role, Laborde has blossomed in a way that his physical gifts have always hinted at, scoring in four straight league matches starting with the win against Clermont. Now on nine goals in the league, only Jonathan David has more in Ligue 1 this season, and he’s also the Europa Conference League’s top scorer.

In the spell since that Clermont match, Rennes have won ten and drawn three times in all competitions, rocketing to second place in the league and top spot in their European group ahead of Vitesse Arnhem and Tottenham. While there are other factors to be sure (the emergence of Majer, who was unplayable in a 4-0 win against Lyon, being one), Laborde being anointed the focal point of a capable attack for the first time in the top flight is paying palpable dividends, showing that rather than be playing second fiddle, he deserves pride of place.

With a deep squad and no European football of consequence again until mid-March, Rennes are well positioned to solidify a top three spot domestically and, with the various absences that they’ve suffered, much of that is down to Laborde and his consistent scoring touch. If Rennes can hold on to him in January (Lyon have been linked ahead of the Africa Cup of Nations), a return to the Champions League for the club looks a distinct possibility, no small matter for a player who was scrapping for playing time at a middling Bordeaux side not so long ago. His ascent even has him tipped as a potential option for Didier Deschamps’ national side. That conversation seems more than well-merited, given the middling form of the likes of Wissam Ben Yedder and Anthony Martial.

Whether it ends in a Champions League place, a title in the Conference League, or even on a plane to Qatar, Laborde’s rise has been truly meteoric. His is hardly a traditional path to success and he thus also offers a reminder that just because a player doesn’t evince their talents from the off, or play a certain role, that doesn’t mean that a shift in tactics or philosophy can’t wring the best from them, despite their being middle-aged in footballing terms.