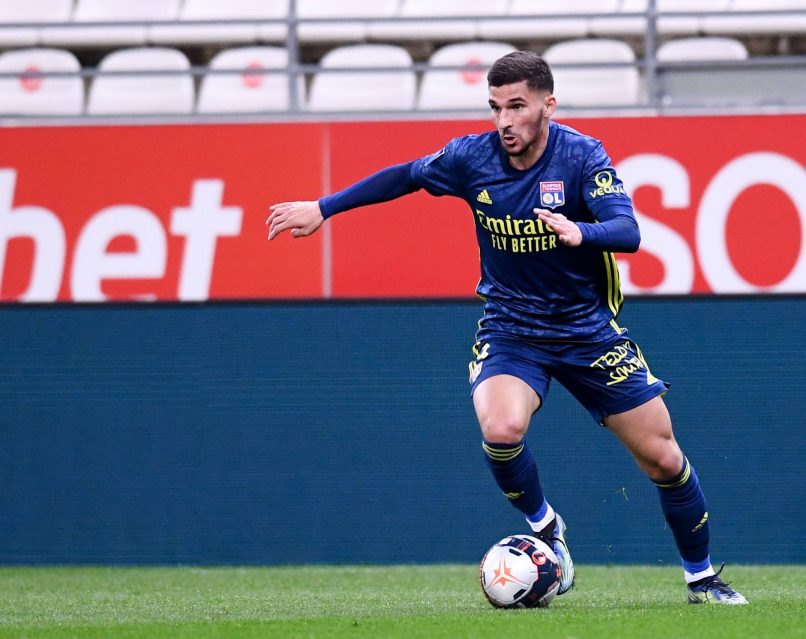 This article is a sample of Issue 4 of our The Modern Footballer magazine – get your copy now here!

To put it mildly, the last six months have not been kind to Houssem Aouar. The Lyon midfielder went from being tipped to join one of Arsenal or Juventus in the summer, on the back of helping Lyon to a shock place in the Champions’ League semi-finals, to being a player who is not even a guaranteed starter for Rudi Garcia as Les Gones chase a first title since 2008. His place in Didier Deschamps’ France side seems to have evaporated as well, having been selected for Sylvain Ripoll’s U-21s for the upcoming group stage of the European Championships (before pulling out through injury) rather than being able to hope for a potential place with the senior side for this summer’s tournament.

Aouar is still only 22, but as his fourth season in top flight football draws to a close, he has seemingly regressed, and at a worrying rate. A case of COVID-19 in the campaign’s early days has not helped, nor has what seems to be a lingering thigh injury which has meant he rarely finishes matches. Competition has emerged as well with Thiago Mendes’ return to form, the continued improvement of Maxence Caqueret, and Lucas Paquetá – a player who many thought was Aouar’s presumptive replacement – having become one of the league’s best midfielders, making the path to the first team all the more obstacle filled. Whether bad fortune or a lack of focus brought about by his having been linked with a move to a more storied (if not more successful) club abroad, Aouar’s season has decidedly been a backwards step.

The irony of this is that for a player feted for his playmaking nous, he has struggled despite being given what many would have imagined a better platform for success. With Lyon playing a 3-5-2 in their Champions’ League matches last season, Aouar was sometimes forced to play deeper, as he had been alongside Tanguy Ndombele when first breaking through. Both he and Marçal were asked to do a bit more work defensively with Maxwel Cornet not only adapting to a new role at wing-back but also being asked to support the attack by stretching play laterally.

Of course, Cornet’s performance in that role, particularly against Manchester City, bore out the wisdom of Rudi Garcia’s having made the tactical switch, but that seeming reticence on the part of Aouar to be an attacking conduit has carried over into the team’s current good run, even with Les Gones having made the move to a 4-3-3.

This more recent switch, precipitated by Thiago Mendes’ improvement as a reliable shield for the back four, and Tino Kadewere’s effectiveness as a wide forward, would have seemed to be likely to give Aouar more freedom to support the attack, and while he has found the net five times in the league this season, two of those have been from the penalty spot. His assist totals have suffered similarly. While it is true that Memphis Depay playing what is essentially a free role in attack will see the Dutchman shoulder the lion’s share of the creative workload, Aouar has been taking more shots than at any other time in his career and getting little in return.

This latter statistic is something that is true of Lyon as a whole — the club are averaging nearly two shots more per match than any other side in the league. Their return on those, however, on a per-shot basis, has been relatively modest, as while they do have the league’s second-best attack, Lyon have too often struggled to break things down as Depay becomes isolated in central areas or drifts to the wing to facilitate play. Sometimes, as with Kadewere’s equaliser against Reims in March, this is a successful tactic, but what Lyon really need to make themselves more of a bonafide title contender is goals from midfield, especially with the Zimbabwean and Karl Toko Ekambi on the other side at times lacking the instincts (and finishing) of a primary striker.

As fine a quartet as Bruno Guimarães, Paquetá, Caqueret and Mendes are in terms of in aiding controlling a match, none of them have much in the way of goalscoring acumen, having combined for just four goals in the league this season. While some of those have come at critical moments, to expect any of them to be the second coming of Frank Lampard or Yaya Touré vis-a-vis their attacking contributions would be foolhardy, meaning that Aouar ought to be the source of these, a part of his game which has gone missing at a most inopportune juncture for the club’s ambitions.

Even with the reasons enumerated earlier, at least in terms of on-pitch issues, this dip is nothing short of shocking. Even going back to his playing in a two man midfield behind Nabil Fékir in Bruno Génésio’s 4-2-3-1 in his first season as a regular, he still contributed six goals in the league. Depay was a part of that side as well, and while Lyon were further off the pace than they are now, the attacking potential of the then nineteen year old did much to drive the excitement around his emergence, something which has badly gone missing this season.

Former Lyon manager Alain Perrin, speaking to L’Équipe in March, suggested that it may even be the case that Aouar, who had sparkled in the Champions’ League final eight this summer, and has turned in decent performances against the likes of Lille and in Paris this season, may be “picking” his matches. “He may have trouble motivating himself for small matches. He has the talent, it’s not a question of abilities but rather of state of mind. It’s not easy to motivate a player like this; I experienced it with Dimitri (Payet) in Saint-Étienne and Hatem (Ben Arfa) in Lyon. A good professional must be able to respond even if he doesn’t show his talent in every game.”

In the current campaign, that’s not been the case, and Lyon have been made to suffer. Again, while there have certainly been mitigating circumstances owing to Aouar’s fitness and the on-again-off-again nature of the transfer speculation this summer, one has to begin to wonder if there is indeed to be more of the Hatem Ben Arfa than the Karim Benzema to his play. To wit, a player who has the talent to succeed, but is held back by indifference, or indeed, impatience.