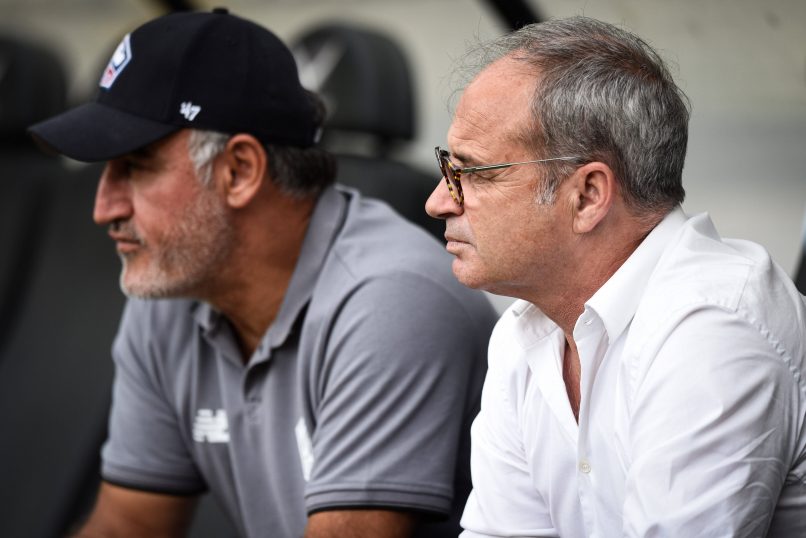 Despite being one of Ligue 1’s most competitive sides under Christophe Galtier since his 2017 appointment, the size of their achievement – should LOSC reach their promised land on Sunday at Angers by bettering PSG’s result against Brest – is difficult to understate.

PSG’s yearly budget is well over four times the size of Lille’s roughly €150m allowance. As L’Équipe reported earlier this year, Paris boasts 13 of the 15 highest players in French football, Wissam Ben Yedder and Cesc Fabregas of Monaco being the other two. Lille’s first choice team cost a little over £66m, around a third of what PSG paid for just one of Kylian Mbappé or Neymar. Title rivals Monaco and Lyon too both have significantly bigger budgets.

Rightly, much has been made of famed Sporting Director Luis Campos’ role in building such an eclectic but talented and cheap squad. Much as he did when laying the foundations for Monaco’s own shock title win in 2017, Campos – who finally left the club earlier this season – was central to the influx of under the radar Turkish talents such as Premier League linked right-back Zeki Çelik (24) and Europa League hat-trick hero Yusuf Yazici (24) as well as arguably Ligue 1’s player of season, veteran striker Burak Yilmaz (35). Lille’s squad is perfectly balanced throughout, that has been central to their success.

In truth however, this miracle title win – should Les Dogues pull it off – is a miracle of Christophe Galtier’s coaching. Lille are a pitch-perfect outfit. They are often impenetrable defensively – their 22 goals against is comfortably the lowest in the division. However, they can score from all areas: Galtier has masterfully found a strategic solution to every problem.

The 54-year-old Frenchman balanced a gruelling Europa League schedule expertly in the first half of the season, posting a famous 3-0 win at San Siro over AC Milan. When talisman Yilmaz missed a run of 13 games due to injury in the spring, Galtier cajoled some impressive stand-in displays from forgotten man Timothy Weah and rejuvenated record signing, Canadian striker Jonathan David (21), who had started the year nervously. After just two goals in his first 25 games, David has improved to 10 in his last 22, including crucial winners over PSG and Marseille.

David’s improvement and burgeoning confidence is a testament to Galtier’s warm and passionate man management style. It’s an attribute reflected in his dealings with the media, publicly sending his condolences to the now ex-employees of failed Ligue 1 streaming service Téléfoot’s team and expressing his best wishes for Formula 1 driver Romain Grosjean after his terrifying crash in Bahrain last year.

Under Galtier’s stewardship, every single one of his first team core group has overtly improved. The commanding keeper Mike Maignan has quietly become one of Europe’s best. Former Southampton and West Ham defender José Fonte has maintained the best form of his career at 37, incredibly starting all but six games in all competitions. Just 21, Fonte’s centre-back partner Sven Botman’s assured season has pushed him to the top of many elite club wishlists.

Despite dropping off in the second half of the season, winger Jonathan Bamba, previously criticised for his lack of end product, was scintillating before Christmas in adding a range of key goals, assists and man of the match performances. Despite struggling with injuries in 2021, Renato Sanches rebirth as a dynamic midfield dictator has been remarkable and, after a disastrous spell at Swansea City, is perhaps Galtier’s greatest achievement.

Lille’s team reads like a roll-call for Ligue 1’s player of the season. The low-key midfield grace of Benjamin André, the resurgence of highly-regarded domineering sentinel Boubakary Soumaré and Ligue 1’s leading left-back Reinildo Mandava all deserve praise. Without Yilmaz, however, Galtier might have already fallen short.

Initially signed as an experienced leader to replace Loïc Rémy, little was expected of the wizened front-man. But in much the same way, Radamel Falcao’s leading by example and exacting finishing helped Monaco to the 2017 title, Yilmaz has coaxed his youthful colleagues through tight spots and produced some supreme moments of quality to drag his team over various lines. Most notably, with LOSC two down at rivals Lyon, Yilmaz produced possibly the most outstanding individual display of the season to wrestle away three crucial points with a beautifully shaped free-kick, a deft assist for David to equalise and the calmest of dinked finishes to win it 3-2.

It could be argued that this strangest of seasons has assisted Lille’s unlikely charge too. Aside from some small crowds of under 5,000 during a brief spell last autumn, this Ligue 1 campaign has largely been conducted behind closed doors. Usually omnipotent at home domestically, Paris have lost five home games this season, more than in the previous seven seasons combined.

However, PSG’s away record has also been average by their standards, underlining the strength and depth of French football this season. The fact that Brest (PSG’s opponents on Sunday) are arguably favourites for the drop into the bottom three after proving to be one of Ligue 1’s most exciting and creative sides during the first third of the season is particularly astonishing. Galter’s Lille however have gelled faster, adapted quicker and been far more astute than a Paris who have occasionally run short on inspiration and been picked off by the likes of relegation battlers Lorient and Nantes.

With Les Dogues under new management and led by a fledgling Sporting Coordinator in former Rennes defender Sylvain Armand, Lille’s date with destiny against Angers on Sunday is likely to be Galtier’s last on the LOSC bench. The typically enterprising Nice, underperforming Lyon and Napoli are all attempting to sign France’s most sought after coach.

Wherever Galtier ends up, should his Lille side emerge triumphant on Sunday night they will deserve their title. With Monaco’s slow start, Lyon infuriating with fluctuations in form and PSG’s self-destructive sacking of Thomas Tuchel before some alarmingly porous domestic displays under Mauricio Pochettino – Lille have unquestionably been the best team in – with much still to play for across the division on Sunday night – Europe’s most competitive top flight in 2020/21.