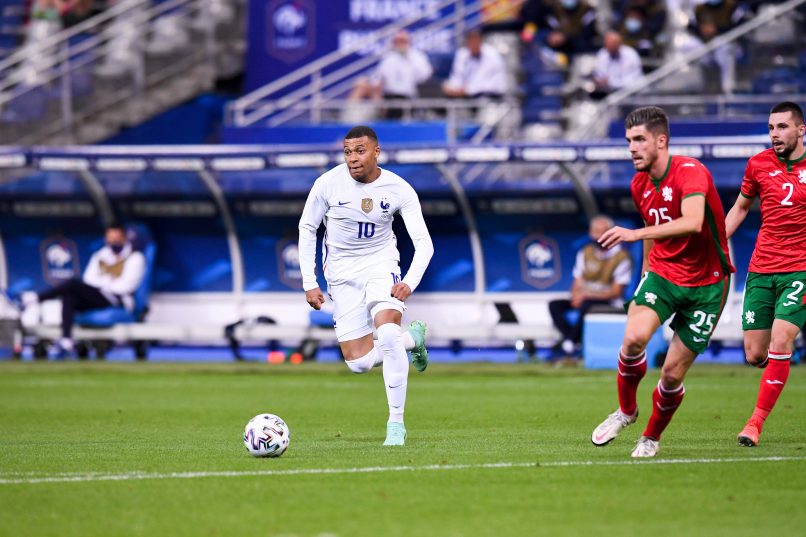 If you were told January that Kylian Mbappé was on course for what his best season so far, it would have sounded absurd. It was a difficult moment of form, and one of the most wretched mini-periods of his professional career, when nothing was working out for him. For the first time in a long time, consistency not just in production but overall play was lacking. The goals were coming in bits and pieces, the attempted dribbles were being thwarted, his shots were not hitting the target as expected, even his first touch was letting him down. It was not just happening in Ligue 1, it was also happening in the Champions’ League. For any regular 22-year-old, this should not have been such a big deal, especially considering the numbers he had posted by that point in the campaign. But every player around that age has periods like that. In January, his humanness showed.

But Kylian is no ordinary 22-year-old and the standards for him are on the level of legendary players who have consistently reached the pinnacle of the sport. He is rarely compared to his peers anymore because he is not merely in a conversation about being possibly the best of his generation. It is now about where he will rank amongst the all-time greats by the time his career is done. The spotlight is permanently on him and he cannot even afford one bad game or one bad month.

After missing the start of the season due to COVID-19, Mbappé returned like a man on a mission. Last season’s Champions’ League final defeat had been heartbreaking and he had had time to process it properly. His first appearance of the season against OGC Nice gave a hint of where his mind was. A goal from a penalty won by him, incredible work to set up Di Maria’s goal, 6 dribbles completed and 65 minutes spent giving Youcef Atal nightmares before the latter went off injured: the signs were positive. If anybody thought European disappointment would derail Kylian, they were badly mistaken. In the next 12 games following that season debut, for France and PSG, he scored 10 goals and assisted 8.

There seemed to be no stopping him at this point, but football is a funny game after all, because it was at this point that the inconsistent performances started. A forgettable performance against RB Leipzig in a must-win Champions’ League game followed, but that was hardly his fault. Thomas Tuchel’s setup meant that PSG only saw only 38% of the ball in Paris and the overall performance from everyone was abject.

December into January was a bad period, a time when even Mbappé’s most vociferous fans started to wonder if the myth about his development stalling was real. From that game against Leipzig, until the last day of January, no one could really tell which Kylian would turn up for a game. Sometimes, the genius showed. At other times, he looked nothing like a top player. He played 15 games in that period and managed 7 goals and 3 assists. Only 6 of those games saw him register a goal or assist. But that was not even the big issue. Kylian has had loads of games in which he was by far the best player on the pitch without registering a goal or assist.

As great as his production usually is, his ability to influence the game in a plethora of ways and be decisive for the team without directly scoring or assisting is one of his greatest assets. It was the evaporation of that ability that concerned onlookers and PSG suffered as a result. Everyone could see that even he started to doubt himself. He had the look of someone who could not understand why his body was not executing the things his brain clearly felt it was transmitting. Some wondered if being rushed back for the Champions’ League knockout stage run last summer had finally started to take its toll. Others wondered if it was just evidence that he was regressing. There was also talk about how Ligue 1 was no longer challenging him and he could not motivate himself to consistently turn up anymore. That sounded strange though, considering that PSG were facing a genuine 4-team title chase and even Champions’ League qualification was no longer a given.

The mid-January game at Angers was Kylian’s worst game of the season, and perhaps the worst game of his professional career since breaking out. It was a game in which he possibly hit rock-bottom mentally, because the performance beggared belief. His face told the story, his body language did too. He looked like a man who had finally succumbed to defeat, as though he had nothing else left to try to remedy the situation. He missed three easy chances, but that was not the biggest problem. Missing chances is normal, it was the manner of the misses that was a problem.

The attempts were embarrassing and encapsulated his struggle. He was not going to be defeated, however, as he registered two goals and one assist against Montpellier in the next game. His dribbling was still off-beat – he completed only two of his eight attempted that day – but it was good to see him scoring again after a rare 4-game drought. A poor game at Lorient followed to end a forgettable January, before he bounced back with goals in back-to-back games to start February. And then another forgettable performance came, this time against Nice, with FC Barcelona next in the first Champions’ League knockout game, a game that turned into the second turning point in Kylian’s season.

If you put Eugène Delacroix in a room and told him to paint the picture of a perfect performance, it would be Kylian Mbappé at Camp Nou in February 2021. On a night when there was no Neymar, Kylian walked in with Picasso – or Marco Verratti as people choose to call him. On the other side was the artist that defined a generation, Leonardo Da Vinci – or Leo Messi as people choose to call him.

Mbappé arrived as Claude Monet in all his glory, and delivered one of the greatest performances in the history of the Champions’ League. A hat-trick, 10 of 11 dribbles completed, four key passes and 13 of 15 duels won in one of the toughest stadia to play in is GOAT level. And yet, Mbappé did it without breaking a sweat. He seemed relaxed and at home, floating all over the pitch and leaving a trail of battered players in his wake. This was a performance to dispel myths about him, to shut the mouths of his most vocal critics and make the world stand still and salute him yet again. It was the most complete and devastating performance of his career.

After the game, the plaudits followed and the world marvelled at what they had witnessed. For the rest of the season, we saw the Kylian that had started the season on fire but with something extra this time. He was evolving into a more complete player and perfecting certain flawed parts of his play. His weak foot finishing, especially, has become one of his assets. When he put two past Bayern at the Allianz Arena, with PSG’s backs against the wall, he walked away with another Man of the Match award at another iconic stadium.

It was as if he was on a tour of Europe’s iconic stadia, crossing them off a checklist of places to show off his artistry. In the league, he was driving PSG’s title charge, taking down team after team and making sure the title rivals took notice. When the Coupe de France final against Monaco came, it was another match in which he was the difference maker. He delivered a Man of the Match performance in a huge game once again, as PSG took down Monaco. It was a performance similar to the one at Camp Nou in execution. A goal, an assist, eight of 10 dribbles completed, 14 of 17 duels won and one jaw-dropping run that went viral. Added to this, and certainly aided by the instant chemistry he has enjoyed with Mauricio Pochettino, is a vociferous leader on the pitch. Where in 2019/20, Mbappé tended to mimic Neymar’s negative approach to chastising team-mates for a poor pass, or missing his run altogether, the Frenchman now practices a positive reinforcement which kept PSG in the Ligue 1 title challenge than they arguably deserved to be, notably in showings against Strasbourg and St Étienne. The world was in awe. Who was this guy?

Well, he is Kylian Mbappé, one of the favourites for the 2021 Ballon d’Or. 42 goals and 11 assists in 47 games, outscored only by Robert Lewandowski. Ligue 1 top scorer, Coupe de France top scorer, UEFA Champions League second top scorer, UEFA Champions League leader in Big Chances Created and Knockout Goals and second in dribbles per game. If France win the Euros and he expectedly plays a significant role in that achievement, only N’Golo Kante could stand in his way for the individual honour. France’s chance of winning has been boosted with the return of Karim Benzema, and the mouth-watering prospect of the trio of Mbappé, Benzema and Griezmann in one XI is not one anybody would be willing to bet against.

The 2020/21 season has finished as Mbappé’s best ever season. It is not even debatable at this point. There is no other season in which he has delivered this many iconic performances or produced as prolifically as in this season, all things considered. 2021 could yet finish as Mbappé’s Ballon d’Or year too. That would be thoroughly deserved and crown a whirlwind season that was not always perfect but certainly showed the size of his character and the depth of his mentality. He fell into the ditch of a poor period and pulled himself out through sheer willpower to turn a 12 month period that started off as one of his worst into a potential Ballon d’Or year. It remains to be seen where it takes him.