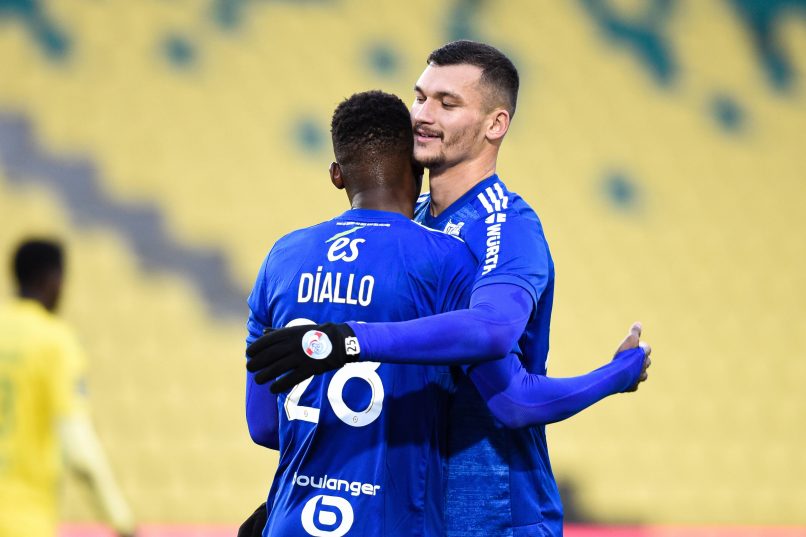 While statistics can tend to be misleading, those concerning Strasbourg duo Habib Diallo and Ludovic Ajorque tell a clear story. In the league games that they have started together, Thierry Laurey’s side have scored 23 goals & conceded 11. In the others, Strasbourg have scored 7 goals and conceded 23.

Diallo only joined up with the squad in October, after controversially moving from arch rivals FC Metz. At the time he joined, Strasbourg were in big trouble. After 10 matches, they sat 18th in Ligue 1. They had just 6 points.

Since November though, they have gained 17 more. Ajorque and Diallo have been crucial, with 23 combined goal contributions (9 goals & 4 assists for Ajorque, 7 goals & 3 assists for Diallo.

The form of Diallo and Ajorque has pleased many Ligue 1 fans, as both strikers were a joy to watch last season. The pair are now beginning to enter their prime years, and both still have the potential to become household names across Europe.

Who Is Habib Diallo?

Habib Diallo was born and raised in Senegal, West Africa. As a young boy, he left his family to join the prestigious Generation Foot academy, the school where Sadio Mané graduated from. In 2014, he moved to France to join FC Metz’s reserve side. Interestingly, this is a well-trodden path; Metz have a 10-year partnership with the academy.

His breakthrough season came on loan at Stade Brestois in 2018. At the age of 23, he scored 26 times and assisted a further 6 goals in Ligue 2. He was the key force behind Brest being promoted to Ligue 1.

Diallo was fast-tracked into the Metz first team for the 2019/20 campaign. In his debut season in the top flight of French Football, Diallo scored 12 times and assisted thrree more in 26 league appearances. Diallo’s profile is similar to his Senegalese & Ligue 1 teammate, Boulaye Dia of Reims. He also reminds views a little of Marcus Thuram, although a little less rapid than both, despite being a well-rounded second-striker.

At 6ft 1, Diallo is great in the air. He is also deceivingly talented on the ball, and that is something Strasbourg have used well. Diallo is a solid finisher too, getting 44% of his shots on target since August 2020.

Despite Get French Football News reporting that Sheffield United were ready to sign Diallo for €15m in October 2020, Diallo made a move to Strasbourg before the end of the Summer transfer window. There, was a player in Ludovic Ajorque, ready to compliment Diallo perfectly.

Ludovic Ajorque requires far less introduction, but just as much appreciation. At 6 ft 6, the French striker is simply one of the most fun players to watch across Europe. He has been with Strasbourg since 2018, and in his first season scored in the quarter final & semi-final in Strasbourg’s unlikely Coupe de la Ligue title win.

At 26 years old, Ajorque is a pure target man, relying on good movement, positioning, and deadly finishing inside the box. Out of his 26 goals across 70 Ligue 1 appearances, just one came from outside of the box.

Strasbourg manager Thierry Laurey’s tactics have been built around Ajorque’s skillset. His size and strength makes him great at shifting long balls & crosses to teammates. Only Montpellier managed to complete more crosses-per-game in the 2019/20 campaign than Strasbourg. No team completed more long balls last season. This has let Strasbourg full-backs Anthony Caci and Kenny Lala shine too. In the 2018/19 campaign, Lala provided 9 assists and 5 goals from right-wing-back.

At the start of the season though, it looked like Strasbourg had been found out. The team completely lacked creativity in the opening games. Everyone in Ligue 1 knew they had to mark Ajorque, and simply stop crosses coming in. Before the arrival of Diallo, Ajorque managed just seven shots in six matches.

The Antidote to Strasbourg’s Issues

The arrival of Diallo has changed everything. Strasbourg were suffering because they lacked any solid striker besides Ajorque. Diallo though, is a fantastic player both inside the box and deep in possession. Opposition teams now have two dangerous strikers to contend with. This has meant that they cannot press the wing backs as much. Before Diallo’s arrival, neither Lala or Caci had scored or assisted. Since then, the full backs have a combined total of seven goals or assists.

What Diallo does, is drop deep and play well off Ajorque. He has allowed Strasbourg to progress centrally as well as down the wings, a relatively novel experience for this side. Diallo is already over halfway to beating his goal tally of 12 from last season, after scoring in both of his opening matches. Ajorque meanwhile has already beaten his 2019/20 goal intake, which was eight.

There have been some outstanding goals and highlights from the pair. In his second match for the club, Diallo scored a fantastic diving header against Brest. He ended the night dropping deep, playing in Ajorque to finish off a 3-0 victory. This was early in the partnership, yet the pair showed great instant chemistry, with Ajorque timing his run perfectly for Diallo’s through ball.

Both players scored against Montpellier too in November. Diallo won a penalty in the first half for Kenny Lala to score, before converting a second penalty himself 4 minutes later. Ajorque grabbed Strasbourg’s third in an unlucky 4-3 defeat.

The pair linked perfectly against Nantes in December too, in a big 4-0 win which helped Strasbourg climb away from the relegation zone. Diallo scored a great rebound, reacting fast to his header hitting the crossbar. Throughout the game, Ajorque and Diallo were splitting the Nantes defence in lethal counter attacks, creating huge space for Strasbourg midfielders. Ajorque ended the night with a penalty strike, his 3rd goal from the spot in 2020/21.

Mark our words, Strasbourg will be the best of the rest surprise between now and the end of the Ligue 1 season, and this dynamic duo will be why.