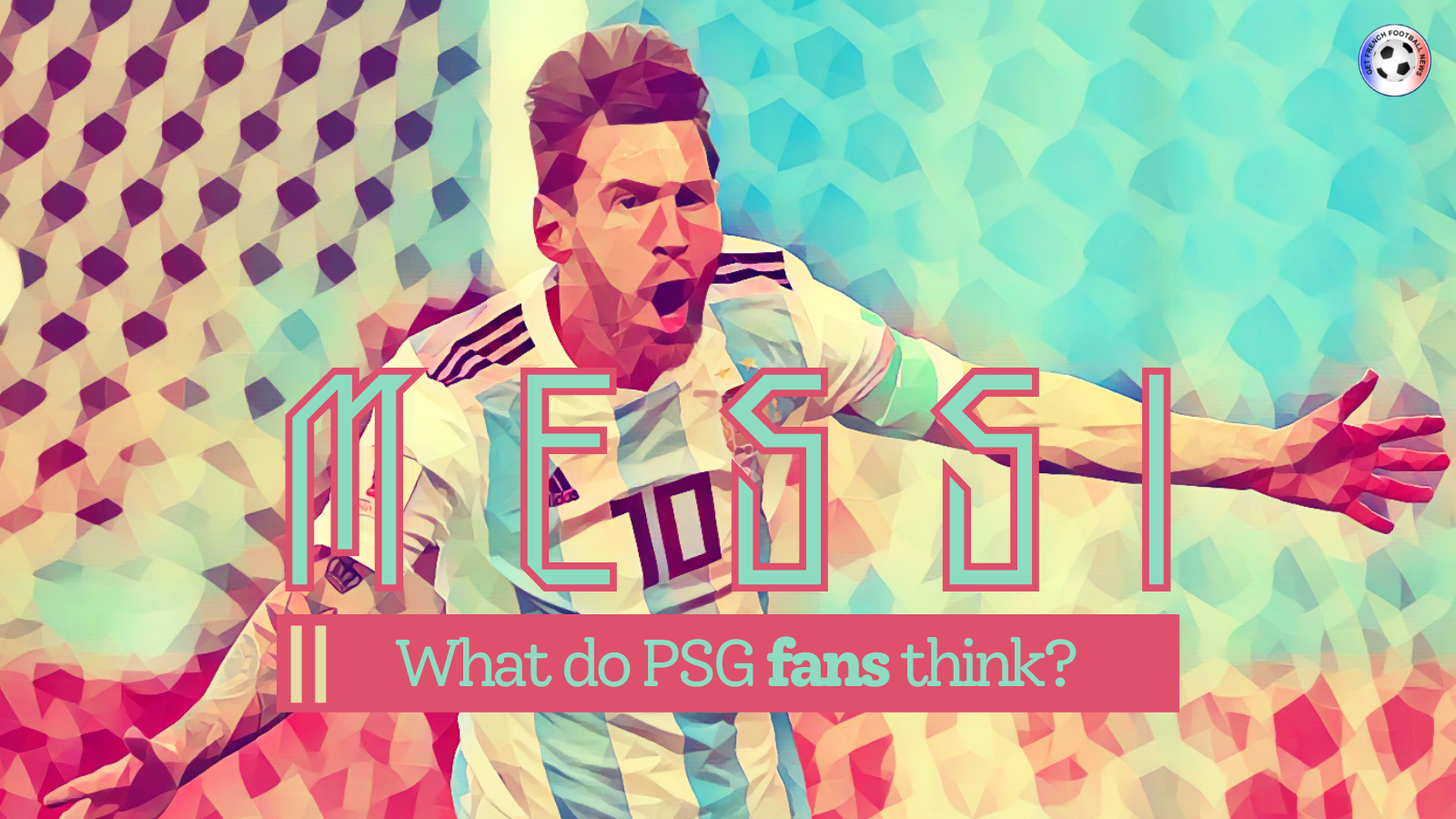 Lee Davey is a GFFN features writer and PSG fan living in Paris. Philip Bargiel is a GFFN veteran, regular podcast guest and PSG season ticket holder. Adrien Dryll is a PSG supporter and GFFN features writer. Tom Scholes is a long time GFFN contributor and has followed Mauricio Pochettino’s career closely though his spells at Tottenham and in Paris.

As a PSG fan, what’s your initial reaction to the signing of Lionel Messi?

LD: I’m ecstatic. PSG have signed one of the greatest players to ever lace up a pair of boots and the fact that nobody even mentions his age is testament to just how good he still is. I truly believe that every PSG supporter should embrace this period in the club’s history because over the next couple of years, something quite special could unfold before our eyes.

AD: When the news broke out that PSG were about to sign Messi, my first reaction was annoyance because I personally didn’t want PSG to sign Messi. That might be a surprising take, as millions of people would kill to have the Argentine in their team, but that’s what I felt.

Why? Because I feel that he was not the player PSG needed most this summer – what about a proper left-back or a world class defensive midfielder? The adding of another superstar in an already unbalanced team was not what I was hoping for. I’m annoyed with PSG because the more they bring in superstars, the more I struggle to identify with the team. I mean, that’s not even funny anymore. Since QSI’s takeover, my biggest fear was to see PSG become a Galactic-Disneyland-Hollywood team. I’m afraid that day has come.

Obviously, I’m not going to apologize for supporting a very rich team and it might be two-minded to say that I’m still very, very excited to see what Messi will do in a PSG shirt at a full Parc des Princes but, deep down, I’m a bit sad to see what’s my club has become.

TS: At first, I was amazed. I never thought Messi would ever leave Barcelona, if he ever did, I thought it would be to Newell’s Old Boys. Messi, Neymar, Mbappé… wow! Seeing Messi with the PSG shirt and on the balcony waving to fans was surreal. The excitement outweighs any logical thinking of how the team will work with him in the side, because you’re just so caught up in the moment.

PB: My initial reaction was that, like most of our big signings, this was a marketing coup to better sell the PSG brand. Now, I’m thinking Messi is getting the better end of the stick than PSG. As a player, Messi’s better days are behind him, although he is still ridiculously good, and it seems that he needed a way out of Barça more than PSG needed him. But the fact that this deal took longer than expected shows that money is still a very important component for Messi, which restricted the amount of suitors obviously. Honestly, this feels like another Buffon.

The big question is how Mbappé & Neymar will react to this move. Will they play better and be more professional with Messi alongside them? It’s my opinion that Neymar is as good as he is thanks to having Messi next to him, so no problem there. What will happen with Mbappé though? Will he welcome this move or see this as competition? Will this move convince him to extend his contract? If he doesn’t, it’ll look like we’re letting go of the future Ballon d’Or winner for free and replacing him with someone who won loads a few years back. Neymar is happy, that’s a given. What’s the Mbappé clan thinking?

Finally, is it that safe to assume that Messi will thrive in a physical league?

How would you like to see Mauricio Pochettino use Messi in the PSG team?

PB: There’s only one way we could play a solid and disciplined formation with Messi, Neymar and Mbappé upfront, which is: Keylor or Gigi (who plays? good luck with that, Poch) – Ramos, Marquinhos, Kimpembé – Hakimi, Verratti or Paredes, Wijnaldum, Bernat or Kurzawa – Messi, Mbappé, Neymar. Of course, Pochettino will need to work on this 3-4-3 system in the league, which is far from a given. In Ligue 1, we can line-up any way we want as 90% of the teams will play with 10 men behind the ball but it will be different in the Champions League where all eyes will be on Poch, his formation and his strategy. 3-4-3 is the only way forward for me.

LD: Firstly, Pochettino needs to give PSG a playing identity, something I believe has been missing so far since his arrival. In Ligue 1, I think the most likely and most effective way of using Messi will be in a free role behind Mbappé with Neymar to the left and Di Maria to the right, forming a formidable front four. However, I would expect Messi to be a part of a front three in the Champions League and any time Mbappé doesn’t start, Messi could possibly play furthest forward – something Mauro Icardi won’t want to hear.

AD: The biggest challenge for Mauricio Pochettino will be to find balance whilst allowing Neymar, Kylian Mbappé and Lionel Messi to freely attack without defending too much.

In Europe, I’d go for stability, so a 4-3-3 with Marco Verratti, Idrissa Gueye and Georginio Wijnaldum in midfield and a front three with Neymar on the left, Mbappé in the middle and Messi on the right. Messi is not as quick as he used to be so playing on the right could be an issue but he can still cut inside on his left foot and create spaces to open the play. The idea, though, would be to play for him and not with him, so this system will mean concessions from Neymar and Kylian Mbappé who will have to adapt their style.

In Ligue 1, Leo Messi will probably be able to have a more central position, so a 4-2-3-1 with him as a proper “number 10” with Kylian upfront, Neymar on the left and Angel Di Maria on the right but this system means selection issues at centre-back as well as playing with just two defensive-minded midfielders. Personally, I’d go for a 3-5-2 with Messi and Mbappé leading the charge and Neymar in support just behind. That would give Messi a more central position and I can’t wait to see him combine with Mbappé upfront.

TS: Having seen Pochettino’s work first hand at Tottenham, the idea of Lionel Messi on the right, cutting inside and opening up the space on the flank for a marauding Hakimi is just so exciting. Pochettino works very well with attacking players and has a history with creative players cutting in from the flanks. Christian Eriksen, a traditional number 10 for the majority of his career, was incredible for Tottenham coming in from the flanks as the main creator. On the other hand, the front three may just have permission to do as they please which is even more exciting, thinking of the football they could play.

GFFN: What do you see as the main obstacles to a PSG with Messi on board achieving Champions League success?

AD: I think, as usual – and it’ll get worse with Lionel Messi – PSG’s main obstacle to a Champions League win will be themselves. They have, in theory, the best team but they’ll have to cope with an extra amount of pressure that will make a defeat, or even a goal conceded, seem like a disaster. The dressing room will of course be full of winners and very experienced players who know how to behave under extreme pressure, but that will still be something to work on for Pochettino. Anything less than winning the cup would be considered a huge failure and would make PSG the world’s laughing stock.

LD: I Believe the main obstacle will be how PSG manage their game defensively. Neymar, Mbappé and Messi are not famed for tracking back and this could be problematic, especially against quick counter attacking sides. Tactically, something will have to change. Also, PSG will likely be the favourites to lift the trophy and with that comes pressure, it’ll be interesting to see how they deal with that.

PB: Frankly, Messi has often been a passenger when things didn’t go Barcelona’s way in the Champions League, as in the 4-0 loss to PSG in 2017 and the eliminations to Roma and Liverpool despite having healthy first leg home advantages, admittedly mainly thanks to Messi. I don’t see it being any different until he retires. We saw at Manchester City last May that it wasn’t really the players’ technical ability that was at fault but more the lack of mental strength to pull something out of the hat. If Neymar, Mbappé and Di Maria couldn’t make something happen, who’s to say Messi will? He seems to go AWOL when the going gets tough.

TS: Perhaps the only thing can be themselves. It sounds weird, but maybe the expectation and hope surrounding this team can only result in failure. “They have to win the Champions League” is something everyone has said all week. But apart from the expectations weighing them down, I think the main rivals for the title would be Manchester City and Chelsea. They’re the two teams, perhaps along with Bayern Munich, who have the weapons to not only withstand any attacking onslaught but also cause damage to the PSG backline. But are PSG actually favourites? It’s impossible to say. If City sign Harry Kane, are they favourites? And Chelsea with Romelu Lukaku on board could be a massive problem. Nevertheless, PSG will never have a better chance of winning the Champions League.