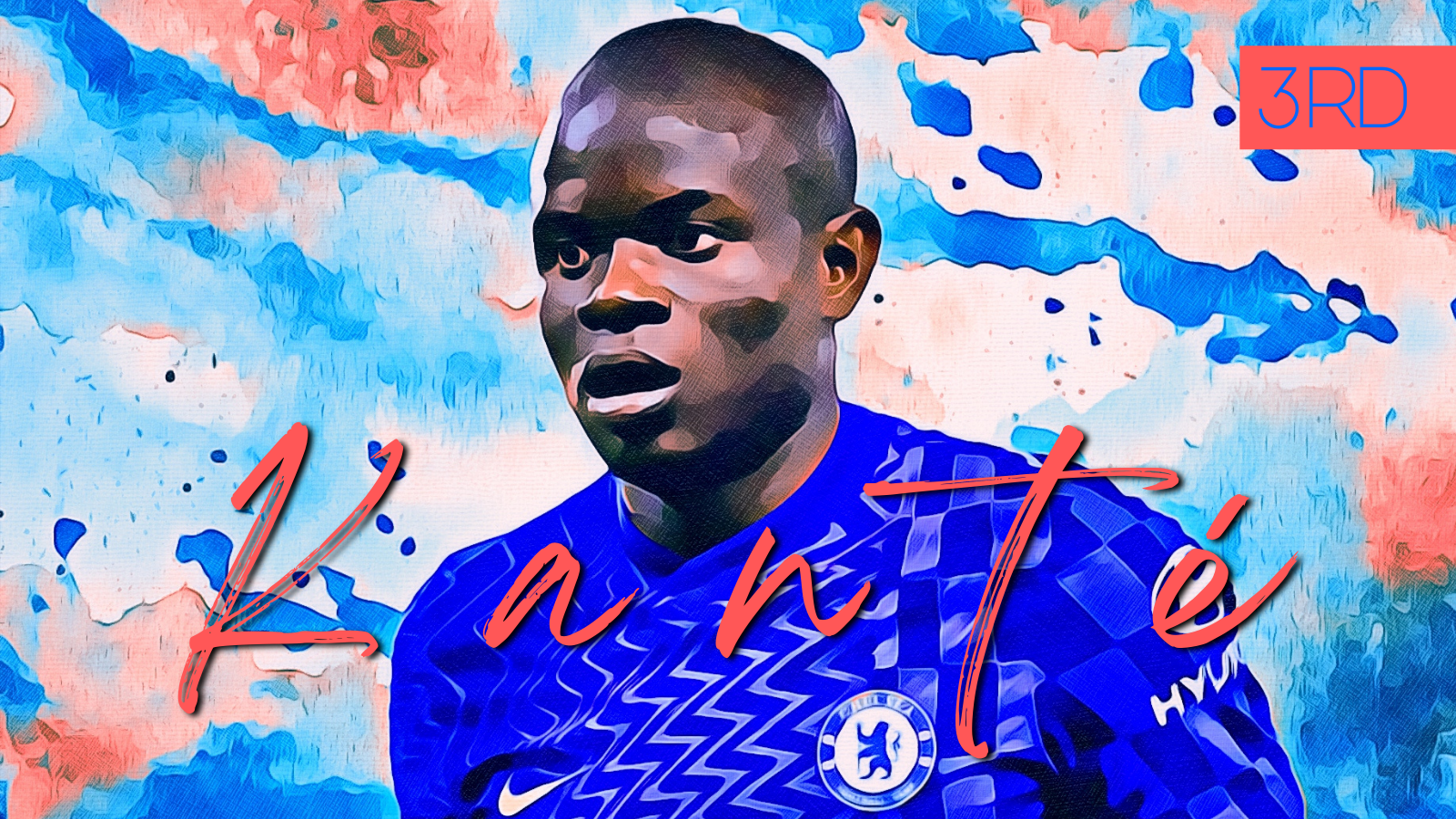 This article is part of GFFN’s French Player Of The Year Award 2021 countdown. Follow the daily feature series here on GFFN as we build up to naming the best French player in the world this year. Look out for 2nd place tomorrow.

N’Golo Kanté has continued his meteoric rise in football into 2021; adding the Champions League and UEFA Super Cup to a haul of silverware that includes two Premier League titles with two different clubs, the FA Cup, Europa League and the World Cup. In this timeframe, the Frenchman has also picked up various individual awards – the PFA Player of the Season and French Player of the Year, just to name a few, and his nomination for this year’s Ballon D’or, eventually finishing fifth, is a testament to his superb 2021, an integral asset for both club and country.

Kanté struggled with a recurring hamstring injury in the early months of 2021 – and his absence from the Chelsea side was sorely missed in the league. Of the 14 league games he played in towards the end of the 2020/21 campaign, Chelsea won 10 and only lost one; to Pep Guardiola’s Man City in one of Frank Lampard’s final games as manager, whilst Chelsea lost to West Brom, Leicester, Arsenal and Aston Villa when he was unavailable – conceding 10. In Thomas Tuchel’s 3-4-3 setup, Kanté flourished in the ‘double pivot’ role alongside Jorginho or Mateo Kovačić, a role the Frenchman is familiar in – he won the league alongside Danny Drinkwater for Leicester City in a midfield two in 2015/16, and the following year alongside Nemanja Matić in Antonio Conte’s 3-4-3.

With Jorginho operating in the deeper regista role – setting the tempo with a series of neat passes, receiving the ball from the centre-backs, Kanté could venture forward and create space for attackers with his clever movement and runs (exemplified by his role in Emerson’s goal against Atlético), combining this with his typical defensive output. Since joining Chelsea in 2016, Kanté has averaged a phenomenal tackle, interception or ball recovery every 5.8 minutes.

Kanté saved his best form for the Champions League campaign, a competition the Blues progressed into the quarter-finals of for the first time since 2014. Kanté only played a combined 206 minutes in the round of 16 and quarter-finals – his workload managed due to injury concerns, as the Blues cruised past Atlético Madrid and FC Porto convincingly. However, Kanté played every single minute in the semi-finals and final as Chelsea won the competition for the second time in their history – a crucial contributor towards this immense accomplishment, named UEFA Player of the Match in these three games, as well as in the Atlético second leg.

Across the two Real Madrid semi-final ties, Kanté averaged an 86.5% pass completion rate – completing more take-ons in the first-leg than the entire Real team (6 v 5), before putting in a fantastic performance in the second leg at Stamford Bridge. The midfielder won 100% of his aerial duels (impressive given his 5’6 height), made four penalty area entries, completed six interceptions and recoveries, and created three chances (the most on the pitch), playing a fundamental role in Mason Mount’s goal to make the it 2-0.

Kanté always delivers in the big games for Chelsea – and May’s Champions League final in Porto was no different. The Frenchman didn’t concede a single foul in the 90 minutes, completing 100% of both his tackles and take-ons, winning the most duels in the game (11) and completing the most recoveries (10). It came as no surprise that Kanté was named UEFA Champions League Midfielder of the Season, the first Chelsea player to receive this award since Frank Lampard in 2007/08. His club manager was delighted with his performances, Tuchel saying: “If you have N’Golo, you have something that everybody is looking for, you have everything that you need in midfield.”

Kante also played a central role for France at this summer’s Euros. He played every minute for his country as Les Bleus lost on penalties to Portugal in the last-16 – averaging a 91% pass completion rate, and completing 14 interceptions across the tournament, second only to Chelsea teammate Jorginho (25). Kanté evidenced his versatility by operating in a 4-2-3-1 setup under Didier Deschamps – his partnership with Paul Pogba working to stellar effect.

This season, Kanté missed four of the opening 11 league games with a combination of coronavirus and a groin issue, as Chelsea look to seriously challenge for the Premier League title. However, he exhibited his class in the 3-0 win over Tottenham in September; in 45 minutes, he won three of four ground duels, completed 100% of his dribbles and long balls, and scored his first goal of the season. Stats don’t tell the full picture, but they certainly help; across the last year Kanté ranks in the top 5% for midfielders in Europe’s ‘top five’ leagues for blocks per 90 (2.32), tackles and interceptions per 90 (2.43), and dribbles completed per 90 (2.06).

Kanté has had an exceptional 2021; and was rightfully in contention for the Ballon d’Or given both his individual and team performances and achievements – particularly in the Champions League, the pinnacle of the European game.