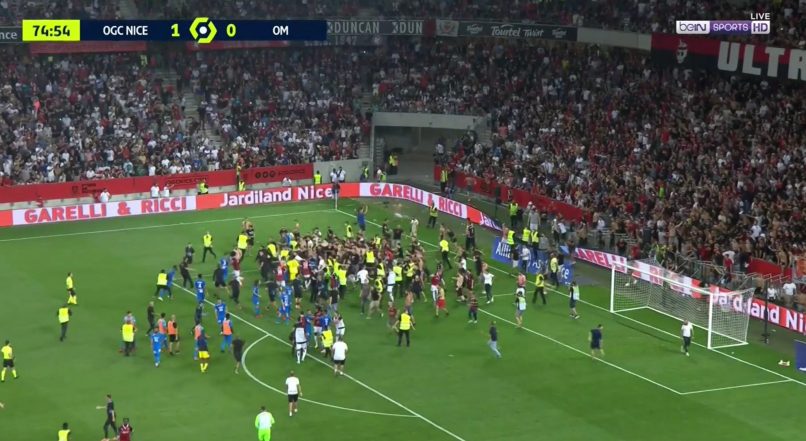 More than 15 minutes remained of Marseille’s Mediterranean derby clash with OGC Nice but Jorge Sampaoli was packed and ready to leave. Backpack on, the OM coach waited outside the visiting dressing room, pacing up and down, as he does on the touchline, picking arguments with anyone not in Marseille blue. Having repeatedly lost his cool, the last hour had seen the Argentine repeatedly restrained by his players, Sampaoli’s inability to act like an adult summed up the evening’s events.

After a warm up against Reims on the opening day, this was Nice’s first big game at the Allianz Riviera with a sizable crowd in nearly a year and a half due to COVID-19 enforced fan restrictions and stadium closures. Nice’s ultras, however, quickly made up for lost time and spent the full 75 minutes of play hurling projectiles, mainly water bottles, at Marseille players.

One bottle floored Marseille’s Dimitri Payet as he prepared to take a corner. Losing his temper after the match-long barrage, Payet angrily retaliated and threw the item back into the stand that houses Nice’s more vociferous ultras. As Mattéo Guendouzi and Álvaro González joined Payet to remonstrate with the Nice fans – Payet throwing a second bottle and Álvaro booting the ball at supporters – proceedings dramatically escalated.

With a line of stewards in luminous vests having little effect, Nice fans jumped barriers, pierced a metal fence and poured onto the pitch to attack OM players. One intruder, who ended up on L’Équipe’s front page this morning, launched a kick at Payet while defender Luan Peres and Mattéo Guendouzi both were later pictured with scratch and strangle marks on their necks, Peres’ drawing blood. Footage later emerged of a member of OM’s coaching staff (not Sampaoli as was suggested by some) forearming a Nice fan to the ground just after Payet was attacked, seemingly inciting further intruders.

Both sets of players and benches soon joined the fray as a mass brawl ensued with OM midfielder Gerson and Jean-Clair Todibo of Nice at the centre of one of the more feisty looking scuffles, the two players having to be forcibly separated. Although officials and the more sensible heads on either side calmed things for a brief moment, another wave of Nice fans soon streamed onto the pitch, sparking a second round of fights and pushing matches. With Sampaoli it’s epicentre, the swirling mass of players and staff slowly moved down the tunnel. Nice later accused OM security of attacking their players while brief glimpses of what appeared to be punches, thrown by both sides, were caught on video.

As Sampaoli and various members of both clubs continued to argue and be separated outside their dressing rooms, Nice president Jean-Pierre Rivère remonstrated with ultras by the side of the pitch, asking them to remain in the stands when the game restarted. The match, however, would not restart. At least not with both teams on the pitch. OM president, Pablo Longoria, who RMC reported had his own altercation in the presidential boxes with former Nice player José Cobos, was heard insisting “We will not play! We will not play!”

Longoria was true to his word – OM didn’t play. But, incredibly, Nice did. At close to midnight local time, Nice’s players – following a lengthy warm up – returned with referee Benoit Bastien to await Payet’s corner. After the ball was placed by the corner flag, Bastien blew his whistle to restart the game despite the fact Marseille’s players were nowhere to be seen. The match ended there. As a result, Nice have been awarded the win, although OM are set to vehemently challenge that ruling with the LFP.

With the fight now moving from the mouth of the Allianz Riviera tunnel to the pages of L’Équipe and social media, both Rivère and Longoria quickly went on the offensive. Marseille swiftly posted a video on Twitter of Longoria giving his version of events to fans. “We need to set precedents for French football.” Longoria said via RMC. “The referee was with us, he confirmed that to us – that safety was not assured. His decision was to abandon the match, but the LFP decided to restart the match. It is not acceptable for us.”

Rivère meanwhile told a press conference, “I don’t really understand why Marseille didn’t restart… it’s disappointing that it ends like this. Things are quite clear… Marseille’s security should not have come onto the pitch and hit our players… What instigated things was the reaction of two Marseille players.”

Both clubs can expect heavy punishments. Nice will certainly see stadium closures or games played at neutral venues as well as a fine, or perhaps worse, with sporting sanctions possible. An array of Marseille fans and staff, along with their Nice counterparts, are also likely to be banned for multiple games, maybe longer. Gerson, Todibo, Payet, Álvaro, Guendouzi and others could all be in serious trouble with Ligue 1 authorities.

This incident is a disaster for French football. The league is hoping to expand its commercial reach following the arrival of Lionel Messi at PSG, with new TV markets and increased sponsorship for all being discussed. However, the disgraceful scenes in Nice last night will only make that task more difficult. The LFP must act.

Punishments for similar incidents have simply not had any effect and, even without fans in the grounds for over a year, the situation seems to have somehow worsened. Just two weeks ago, OM were subject to another barrage of bottles as Valentin Rongier was injured at Montpellier. A variety of clubs have been sanctioned in the last few seasons for an array of fan disturbances both in grounds and beyond. OM ultras’ storming the club’s training ground last season being the most notable recent escalation. Games behind closed doors and stand closures as punishments for clubs were already well known to Ligue 1 viewers long before coronavirus enforced fan absences.

Three minors were arrested in the aftermath having invaded the pitch while a group of OM fans waited to welcome their players back to the training ground at 3.30am this morning. Local police have already launched an investigation and the LFP isn’t far behind. Marseille’s city mayor referred to the events via Twitter as a “masquerade”. With the dust still a long way from settled and ramifications likely to be far reaching, much like Sampaoli’s temper, this debacle is far from finished.