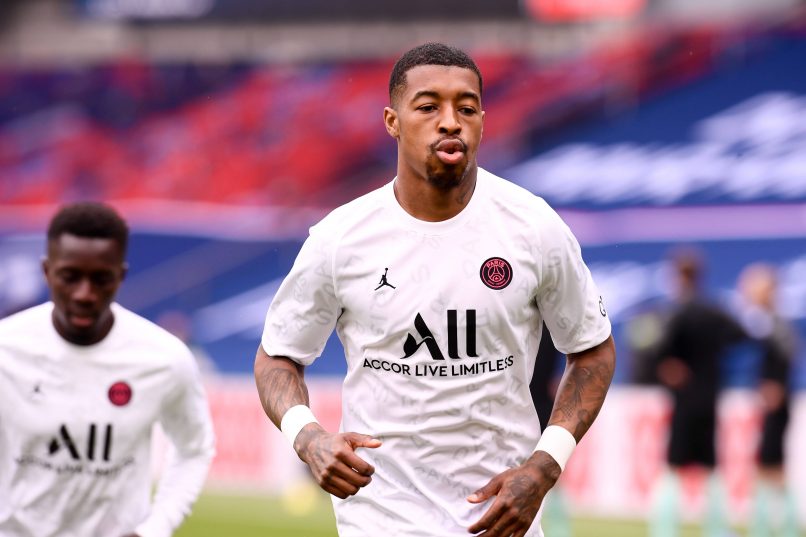 Things for Presnel Kimpembe didn’t look great in the summer of 2018 — France had just won the World Cup, and while he had made his first competitive start in the tournament, that it came in a near-dead rubber against Denmark meant that he was a bit of an afterthought. After all, Didier Deschamps’ insistence on playing left-footed and right-footed centre backs on each appropriate side meant that, with Raphaël Varane firmly ensconced in the eleven, and Samuel Umtiti next to him, there was to be little opportunity for the Paris Saint-Germain man. Moreover, with Varane and Umtiti both only 25, Kimpembe, just 23 himself, was similarly in no position to play the waiting game vis-à-vis either of his compatriots’ potential international retirements. Having played for DR Congo at U21 level, might Kimpembe have been regretting his choices, given Deschamps’ noted propensity to have a staunch level of loyalty to certain players?

Things broke for him, though, as a lack of form and a raft of injuries have meant that Umtiti has not started a match for his country since France’s shock 2-0 loss to Turkey in 2019. There has admittedly been competition for his place from the likes of Clément Lenglet, Umtiti’s teammate at Barcelona and, more recently, RB Leipzig’s precocious Dayot Upamecano, a player who, while not left-footed, has seemingly caught the eye of Deschamps, and was briefly deployed on left of a back three against Croatia in September. Despite these challenges, though, Kimpembe remains the firm favourite to partner Varane when the tournament kicks off in three weeks’ time. Yet the question remains as to whether he is indeed the best option, or whether Deschamps might have been more wise to wait to anoint the PSG man as a nailed-on starter until having a larger body of evidence to examine.

Indeed, with only the aforementioned 90 minutes against Denmark at a major tournament, Kimpembe is rather callow when it comes to his experience for his country. Of course, this has never proved an obstacle for Deschamps in the past; his having won the World Cup with a back line that included the unheralded Benjamin Pavard at right-back and the highly thought of, but untested Lucas Hernandez on the opposite flank is evidence for that. Plus, the way in which he used Paul Pogba at the 2014 World Cup, or relied on the then uncapped Umtiti in the latter stages of Euro 2016 shows that experience is not a prerequisite for inclusion in an eleven, even in the high-pressure environment of a major tournament.

That Deschamps has done so well to foster squad harmony throughout his tenure has likely gone a long way towards helping those players succeed without the benefit of experience. Kimpembe has experience aplenty at Europe’s top table, having not only helped PSG to reach the Champions’ League final last season, but also being named to the team of the tournament, yet there remains some uncertainty, both on and off the pitch, as regards his mental fortitude. For a player who, along with Marco Verratti and Marquinhos, represents the club’s development from a slapdash rich man’s plaything to a place at in the continental elite, Kimpembe’s inconsistencies remain worrying indeed.

This was, of course, most recently exemplified by his recent sending-off against Rennes. In a match in which PSG had been pegged back and, under the cosh, looked set to drop two vital points in the title, with the Breton side having more than taken the initiative in the second half. Indeed, Keylor Navas’ brilliant save from Flavien Tait may have been the moment in which the capital side’s title hopes just stayed alive. Three minutes from time, Jérémy Doku, Rennes’ incandescent (and inconsistent) winger broke forward up the left flank, striving to reach a clearance. Kimpembe, who had playing high up the pitch, mowed down the Belgian, and almost before he had a touch, the defender cleared him out with a lunging, two-footed challenge.

Doku, not a player known for his incisiveness, was in his own half of the pitch, far from goal, and Danilo Pereira, playing in central midfield, was tracking back as well. To wit, the combination of Doku’s quality, his position on the pitch, and the lateness of the minute all made the situation far from a potential game-breaker. Nevertheless, Kimpembe was shown a deserved straight red card, which eventually led to a three-match ban. His second red card of the season after being sent off for a pair of bookings in a loss to Leipzig, the “red mist” was in full effect for Kimpembe, and it may yet have had a deleterious effect on the team’s season

The challenge, taken in isolation in terms of the match itself, was bad enough, but the wider context makes it all the worse. Not only are the capital side fighting tooth and nail to retain the title, but they are also still involved in the Coupe de France, with the final set for today against a Monaco side which bedevilled the champions under both Mauricio Pochettino and Thomas Tuchel. As both managers have demonstrated, the club’s options in central defence, outside of Marquinhos and Kimpembe, are limited indeed. Thilo Kehrer has never looked the part since arriving from Schalke, and the less said about Danilo Pereira’s bumbling experiments there, the better.

Moreover, with Marquinhos only just back from three weeks on the sideline with a hamstring injury in a season in which fixture congestion and fitness has been a constant concern, the captain would then be forced to play in both Coupe de France fixtures — what proved to be a challenging semi-final against Montpellier, as well as the final against Monaco. Since the international break, PSG have played, among the Champions’ League and the Coupe de France, a midweek fixture in each of the last six weeks. Without Kimpembe available, though, Pochettino, facing a crucial set of domestic fixtures, would have to do without a player whom many see as a vital lynchpin to the team’s style, and place added stress on Marquinhos as he struggled for fitness.

Indeed, Kimpembe’s penchant for a long ball and overall canniness in terms of distribution do make him an ideal building block for playing on the counter, as his ability to find Mbappé streaking up the flank or springing the offside trap by splitting the defence. But for a player who has been a first team regular for half a decade, his positional sense and anticipation are still worryingly lacking, especially as, save Lenglet and perhaps Lucas Hernandez at a push, like PSG, France lack capable options in reserve.

Knowing this, and seeing how Kimpembe has responded whilst under pressure, is Deschamps right to place his trust in the defender? While it’s true that his other options are no less capable, might be be better trying out the likes of Jules Koundé in the team’s upcoming friendlies? The Sevilla youngster has been sent off but once in his professional career, and has been a reliable part of a side who battled harder than many would have expected for the title in Spain. He is right-footed, but Adil Rami and Laurent Koscielny did play well enough in the Euros in 2016 to suggest that such as idea may yet have some merit.

The bottom line, though, is that for all of Kimpembe’s eye-catching attributes; his pace, his flair for the dramatic, and his commitment, he still presents a very fraught proposition for Deschamps. With the manager staring down a not insignificant turnover looming given the ages of the likes of Olivier Giroud and Karim Benzema, can he really afford to have such instability in defence? Time will tell if Kimpembe is the right man for the job for his country at a major tournament, but the view from here is one laden with circumspection.