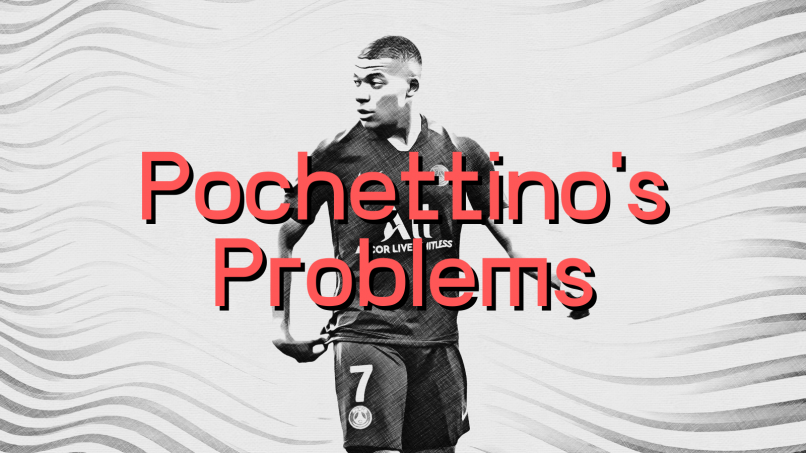 Eight wins from eight league games may not sound like the rockiest of starts for a title favourite, but Paris Saint-Germain lead an existence defined by duality and contradiction. In France, by and large, PSG are critiqued based on their quality of performance with the title often seen as a formality by some. In Europe, however, it’s all about results. It’s early on both fronts but Paris are yet to truly convince in either regard.

Despite that perfect domestic record, a lead of nine points and a goal difference of plus 15, Parisian performances have been repeatedly disjointed, complacent and worryingly static defensively. Promoted Troyes were unlucky not to collect a point on the opening day having taken the lead. Strasbourg fought back from 3-0 down and might have also nicked a draw against a haughty Paris side. Brest and Romain Faivre went toe-to-toe for long periods before being edged out 4-2.

Lyon, learning from Club Brugge’s aggressive, hard-pressing Champions League display in taking a point from Paris, had a likely win stolen by a flabbergasting VAR call. Metz, meanwhile, capitalised on a lazy PSG display only to lose the game on the last kick. A routine 4-0 win over promoted Clermont was perhaps the only comfortable and wholly deserved Paris triumph so far, even if a gung-ho Clermont managed 14 shots to PSG’s 13.

Mauricio Pochettino may only be nine months and 44 games into his PSG reign – although that’s arguably plenty of time to mould a side of such talent to something resembling the required shape – but issues seen in his first loss to Lorient in January persist.

Thomas Tuchel’s incarnation of PSG managed to balance the top heavy nature of the squad – even often deploying what seemed like an unworkable 4-2-4 to good effect – and the intensity, organisation and proactive style needed to combat an often undermanned midfield and the space naturally left between defensive and midfield lines when turning over possession. Pochettino’s team, meanwhile, lack the intensity and fluidity to make a similarly positive set up work. This PSG are too easily unbalanced and even look a little flustered when teams pinch the ball high up the pitch or find space on the counter.

The fact that Tuchel was sacked mid-season by PSG before taking their former captain, Thiago Silva – whom Tuchel had asked to club not to release, and their new club Chelsea to the Champions League title – PSG’s Holy Grail – in the same campaign amounts to the most embarrassing moment of the QSI era. The improvements made by Chelsea and the differences in Paris since also underline how intelligent and precise the German coach can be and that he was right all along in a number of regards, not least Silva.

Although Ángel Di María, Neymar and Kylian Mbappé weren’t always scintillating in their combination play under Tuchel, they consistently looked to be united in terms of ethos and game plan. PSG were usually effective, if not always effervescent. Although the addition of Lionel Messi means that the now four-man attack needs to reorganise once more, and admittedly they’ve only played together once so far, in 2021 a variety of combinations deployed by Pochettino have too regularly appeared out of step. As if Neymar, Mauro Icardi, Mbappé and Di María have all been given slightly different game plans.

Although Neymar and Mbappé’s natural understanding can mask some of those jagged edges, PSG have often relied upon individual brilliance in the bigger games under the former Tottenham coach. Paris have truly only impressed when not expected to impose themselves on a game against a comparable force, using their pace, individual quality and the Neymar-Mbappé partnership on the counter. Pochettino is clearly at his best in designing a side to play a fast and direct style, what the Spanish might call ‘vertical’. Both the Barcelona and Bayern Munich wins in last season’s knock-out stages were aided by such a style, while Mbappé’s Nou Camp hat-trick was an example of individual quality seeing Paris home.

Oddly, the arrival of the greatest player of all time at the Parc des Princes pulls Pochettino even further away from his comfort zone. Although Di María may be dropped for balance’s sake and a much-theorised (but yet to be seen) three man defence with added Sergio Ramos may provide the required security in Europe, Messi’s arrival makes Paris even more top-heavy and encourages more teams to defend deep against Pochettino’s side, heightening the need for a formula that can navigate a low-block – an idea the coach always struggled with at Tottenham.

Bizarrely, Pochettino’s style makes him best suited to set out a team to play against PSG, rather than corral PSG’s celebrity forwards to break down a stubborn opponent.

Positives remain, however. When fully fit and settled, Messi’s presence and otherworldly ability to navigate the tightest of spaces alone could be enough to override any issues Pochettino has against deep-sitting, well-organised teams. Meanwhile, Paris’ midfield has shone so far this term, even if their ability against Europe’s elite remains uncertain. Although the lethargic Georginio Wijnaldum has bordered on disastrous so far, Ander Herrera is in the form of his life and has been ably assisted by a rejuvenated Idrissa Gueye. Having again proven his unique qualities in helping Italy to EURO 2020 glory, Marco Verratti’s return could complete the trio and provide the balance PSG have been searching for.

Worryingly for Pochettino, however, in 2021, PSG’s opponents have fathomed another way to compete. While Lorient and Nantes both stole deserved but more traditional backs-against-the-wall style wins, both Lyon and Club Brugge have shown that a more measured approach, complemented by an aggressive press, also exposes Parisian weaknesses. Despite their form this term, without Marco Verratti’s waspish belligerence and supreme technical ability, Gueye and Herrera (who’s also been charged with covering gaps left by Achraf Hakimi’s marauding runs from right-back resulting in further imbalance) were often picked off and gaps in front of Marquinhos and Presnel Kimpembe exposed too easily. PSG could, perhaps should, have lost both games.

As PSG and Pochettino found out last season, individual attacking class and a seemingly ill-defined game plan has a limited shelf-life against the very best as Manchester City suffocated Paris and ran out easy winners in their semi-final tie. Although Paris impressed in beating Bayern and Barcelona, even with Messi on-board Barcelona were a long way from their best and Bayern might have edged a tight meeting had Robert Lewandowski been fit.

City and Pep Guardiola out-thought, out-maneuvered and out-played Pochettino’s charges by being too adept in possession to give up chances to counter as willingly as those before and too skilled in counter-pressing and quickly find their shape to allow chances to coalesce when those fleeting opportunities arrived. Tuchel’s Chelsea, meanwhile, won three games in a row against City last season, including the Champions League final. PSG have lost the last three against the Premier League champions and have yet to beat City in the QSI era.

After the draw with Brugge, PSG are already a long way from winning their Champions League group which includes Brugge, City and RB Leipzig, a potentially crucial feat given the likely opponents on offer after Christmas otherwise. Although Paris are likely to improve as the season goes on and a fully functional Lionel Messi could theoretically change everything, Pochettino is already struggling for solutions to problems he’s been unable to solve across more than a decade as a coach. Now into his second season at the Parc des Princes, Pochettino’s already running out of time.