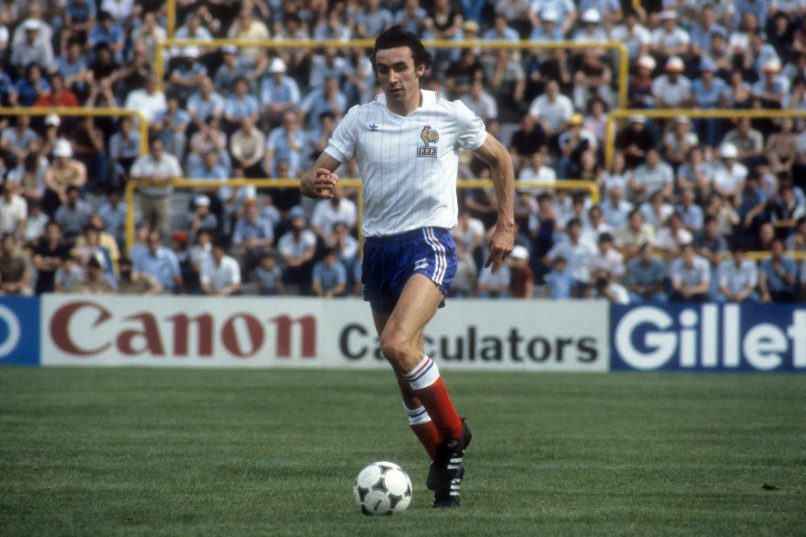 To the unassuming, Paris Saint-Germain are Paris’ only football club.

As much as their owners might want to present this narrative, of course it is not true. Red Star are a club steeped in tradition and social activism. Paris FC have flirted with promotion from Ligue 2 in recent seasons. And then you have Racing Club de France Football.

Formed in 1882 and a founding member of Ligue 1, Racing are one of France’s most historic clubs. Their greatest period of success came during the 1930s and 1940s, when they won a league title and five Coupe de France trophies.

A brief resurgence came at the beginning of the 1960s, with back-to-back second place finishes in Division 1, but by the end of the decade Racing were in the fourth division. Not much happened for the next 20 years, until they were bought by Jean-Luc Lagardère.

An extremely successful businessman, Lagardère started out in engineering but grew to become CEO of industrial giant Matra. This company became famous for its association with motor racing, as Lagardère’s Matra-Ford team won both Formula 1 titles in 1969, alongside other forays into the 24 Hours of Le Mans and rallying.

His expansion into football started in the late 1970s, although his intention to form a new team called Paris 1 never materialised. Lagardère returned in 1982, with the intention of restoring Racing – a name with more than a little irony – to their former glory.

The plan was to merge Paris FC and Racing, but the latter refused. Not used to rejection, Lagardère simply bought PFC, renaming it ‘Racing Paris 1’ and copying Racing’s light blue and white kit. Within a year the merger had taken place.

Racing jumped up a league to Division 2, and in 1984 beat Saint-Étienne in the promotion play-off. The team moved from their historic Colombes home to the Parc des Princes. Prolific Algerian icon Rabah Madjer was up front. Lagardère spoke of “Racing succeeding Saint-Étienne in the hearts of the French people.” As usual, he appeared to be getting his way.

Maxime Bossis, starting centre back in France’s victorious Euro 1984 campaign, arrived from Nantes on a monthly wage of 300,000 francs. Having defeated Saint-Étienne in a case of play-off déjà vu, now Lagardère really laid down the gauntlet.

Arguably the most seismic signing was Luis Fernández. The midfielder had just captained PSG to their first league title and was part of France’s legendary ‘Magic Square’. And yet, tempted by a monthly wage of 700,000 francs, he moved to the newly promoted side.

On a similarly eye-watering wage was Enzo Francescoli, who arrived in Paris having starred at the 1986 World Cup with Uruguay. Combined with his compatriot Rubén Paz, German playmaker Pierre Littbarski and Les Bleus left-back Thierry Tusseau, in just a few months Racing had assembled one of Division 1’s best teams.

Considering this signing policy and an annual budget of 80 million francs, Racing were arguably the world’s first Galácticos. Unfortunately for Lagardère, it backfired massively.

Given his investment, a final finish of 13th was embarrassing for the businessman. In shades of Roman Abramovich at Chelsea, he then decided to recruit Porto’s European Cup winning manager Artur Jorge.

It’s here where Lagardère’s background could be seen. His previous sporting endeavours involved far less variables. Engineer the best car, recruit the most skilled driver, and you have a pretty good chance of winning. Success in football however is not so simple.

Jorge may have been champion of Europe, but few would have labelled him the continent’s best coach. In his first season he did get Racing into a title race, after a slow start, but in typical fashion won none of the final twelve games – scoring just four goals – to slump to 7th.

From there things quickly unravelled. Racing only avoided relegation by virtue of goal difference in 1988/89. As business rival Bernard Tapie was getting his revolution at Marseille into full swing, Lagardère was barely keeping his head above water.

What was arguably worse was the club were now named Matra Racing, after Lagardère had persuaded the French FA to allow his brand into the name. Each defeat now represented a direct embarrassment for Matra on a national scale.

Lagardère had got involved in football largely as a marketing exercise, intent on spreading his company’s name across Europe. As he once put it: “We are helping to raise awareness of the brand before the launch of products intended for the general public.”

In pursuit of this goal, Matra set aside more than half their annual advertising budget to fund Racing. With limited success, Lagardère and shareholders were getting fed up. After a week of press rumours, on 6th April 1989 Lagardère announced he was withdrawing funding. Immediately Matra’s share price rose 5%.

No sooner had they arrived, the stars deserted Racing. Fernández and Francescoli relocated south, to Cannes and Marseille respectively. Jorge returned to Porto. In 1991, Racing left Parc des Princes. The grand vision turned into a soft-focus pipe dream.

In terms of reasons why, one was infrastructure. While the quality of players improved under Lagardère, facilities did not. The training ground was largely unchanged from Racing’s years in the footballing wilderness, with players having to wash their own kits at home.

Another problem Racing faced was fans. For individual games they could attract crowds of close to 40,000, but on average gates were rarely above 9000. Former player Victor Zvunka blamed the move to Parc des Princes saying: “Here, we are not at home and the opponents are particularly motivated. We had to stay in Colombes.”

Perhaps though, the major issue was simpler: Paris.

The city is different from the rest of France. Amidst the egos and grandeur of Lagardère and Paris, Racing was a façade. When they tried to sign Eric Cantona from Auxerre, he was invited to a banquet with servers wearing powdered wigs. Less than impressed, Cantona termed it: “like something from the Middle Ages.”

Even when Lagardère announced Matra’s withdrawal, he held the press conference at the five-star, £1000 a night Hôtel George-V. As former CEO Jean-Louis Piette put it: “The club is artificial, money does not solve everything.”

Without their stars, Racing somehow reached the final of the 1990 Coupe de France, but lost 2-1 in extra time to Montpellier. Relegated, that summer the mayor of Paris refused to subsidise the club. Racing fell to the third division, being captained by 19-year-old midfielder Stéphane Dedebant.

In the years since, Racing’s highest finish has been fourth in the National, coming way back in 1999. Today they reside in Group L of the National 3, the fifth step of the French footballing pyramid.

Amidst this mire of failure though is Racing’s youth academy. In recent years the likes of Benoît Cheyrou, Jérémie Aliadière, Kévin Malcuit, Louis Saha, Steven N’Zonzi and William Gallas have come through the ranks in Colombes.