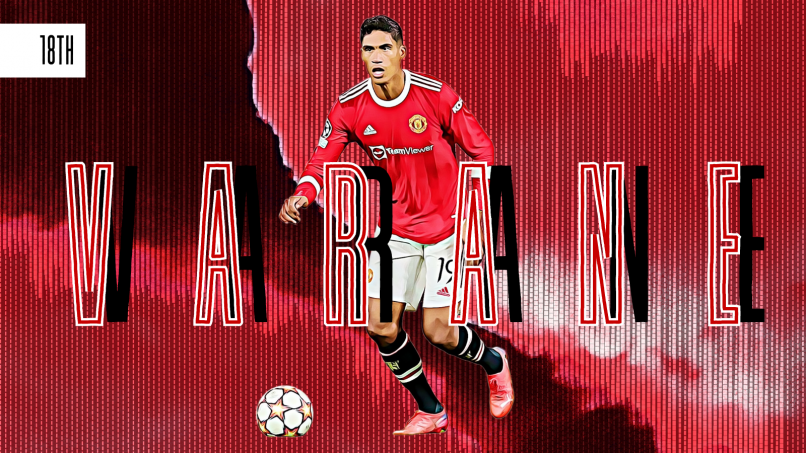 This article is part of GFFN’s French Player Of The Year Award 2021 countdown. Follow the daily feature series here on GFFN as we build up to naming the best French player in the world this year. Look out for 17th place tomorrow.

When you have pretty much won it all by the age of 25, it’s hard to imagine your motivation levels remaining at their peak. Four Champions League titles, two league titles and one World Cup triumph would be beyond the wildest dreams of most players across an entire career. Players who reach that level of success early on tend to look for ways to reinvent themselves or challenge themselves at the top level. It took three years but Raphaël Varane finally moved on this year. It was time.

There may be many who won’t understand Varane’s decision to leave Real Madrid, a club at the pinnacle of the sport, at 28 to join this version of Manchester United, a club full of problems in management structure and coaching. Why not stay put and look for ways to motivate yourself in Madrid? There would be a lot less to lose by not making such a risky move, one that could affect your legacy should you struggle with the dysfunction. Raphaël Varane, however, is not that man. He’s a risk-taker who bets on himself. He fearlessly joined Real Madrid at 18, after just one top flight season, and became an undoubted success. Ten years later, he left Madrid as a club legend with over 300 games played and over 15 trophies won.

Despite all Varane has achieved, this year marks perhaps the most pivotal year in his career to date. It may be absurd to say he has anything to prove, but that is the case. Doubters have slowly amassed in 2021, as if all he had done over the last decade was a fluke. That noise got even louder as he joined Manchester United, with many – who don’t seem to have watched him play over the last ten year – predicting he would struggle in the Premier League. Those naysayers are now clutching at straws. So far, Varane has been excellent – to the point where United’s defence falls apart without him.

Varane has had to do a lot in the short time he’s spent in England. Often, he’s outnumbered and forced to cover a remarkable amount of space. In applying his wealth of experience – again underlining his success at Madrid was no accident – he has dealt admirably with many of those situations. It’s no surprise that Manchester United haven’t conceded more than one goal in any of his nine games to date while he was on the pitch. Without him, they conceded five against Liverpool, four against Leicester, three against Atalanta and two against Manchester City. At the time of writing, that was more than United have conceded in all of the Frenchman’s minutes so far this season. It also shows how poor the now departed Ole Gunnar Solskjaer’s defensive structure was without Varane’s heroics. One man should not have to be that much of a difference maker defensively, especially at a club like Manchester United.

EURO 2020 presented a chance for Varane to once again lead from the back for France. Expectations were high for the world champions and tournament favourites. After a man of the match performance against Germany in the opening game, France defensive personnel started to fluctuate. Lucas Digne came in at left-back for the 1-1 draw with Hungary in place of Lucas Hernandez. Against Portugal, Hernandez was back but Benjamin Pavard was replaced at right-back by Jules Koundé. In the second round exit to Switzerland, Pavard returned but Deschamps opted for a back three, with Clement Lenglet coming in and Adrien Rabiot unusually slotting in as a wing-back on the left to replace Hernandez.

Such instability certainly affected performances and Varane was no exception. Hard as he tried, mistakes were made. France conceded six goals in four games at the tournament, a far cry from the defensive solidity that made Les Bleus so successful at the 2018 World Cup. Naturally, Varane was criticised, as were others, especially centre-back partner Presnel Kimpembe.

The UEFA Nations League finals offered redemption. Although France eventually triumphed, showing character to come back from deficits in both the semi-final and final, there were still issues defensively. France conceded twice against Belgium and once against Spain after Varane went off injured. Despite winning the Nations League, Les Bleus had kept just one clean sheet in eight games. Those issues could largely be attributed to instability. Eight different defenders played for France in Italy. Considering the circumstances, Varane certainly deserves a lot more credit than he received for his leadership and for the amount of work he did as France faced high quality opponents in EURO 2020’s ‘Group Of Death’ and in the Nations League finals.

All in all, it has been an interesting year for Varane. In moving from Madrid to Manchester, via two international tournaments, he has largely excelled. There have been forgettable, even disappointing, moments but ultimately, he can hold his head high. The on-pitch adversity has been endless all year, with injury problems also creeping in and he should be praised for maintaining a consistent standard while delivering some top quality performances.