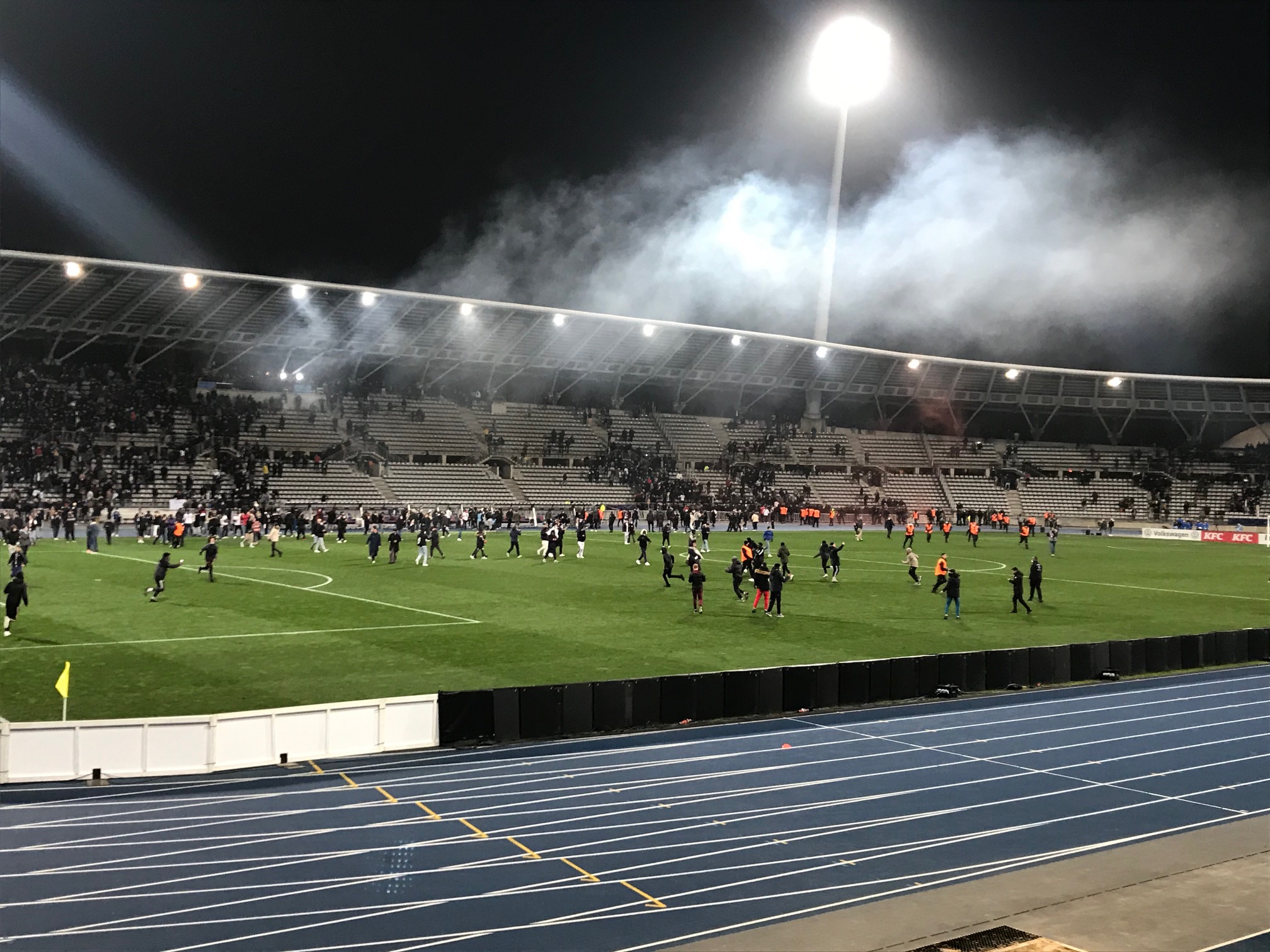 How did a simple French Cup tie descend into another embarrassment for French football?

Last Friday, Paris FC’s game against Olympique Lyonnais didn’t go to its term after several violent clashes occurred at half-time. It was a traumatic experience for many and is another sad proof that French football is going through an unprecedented crisis.

I was really looking forward to this game. As a Parisian, I’ve always had a soft spot for PFC, even though I’m a PSG supporter in the first place, and going to the small Charléty Stadium to see this little club from the south of the capital face one of the best teams in Ligue 1 was an opportunity I could not miss.

The context of the game

One day before the game, PFC’s website announced that more than 17.000 people were expected. In other words, it would be the club’s best ever attendance as the average numbers are around 2.000. Because of this, the gates opened exceptionally at 7:00 PM.

We entered the stadium easily at around 7:30 PM after a relatively standard control procedure at the gates and reached our seats that were in the middle of the east side stand. This stand, which is usually closed when PFC play regular Ligue 2 games, was open due to the record crowd.

Sitting there meant two things: first, we had a perfect view on Charléty’s main stand (the one usually open) and secondly, we were on the same side as the visitors who were boxed approximately 30 metres away from us on our left and only separated from our stand by small plexiglass windows.

The first thing that struck me was the low number of stewards nearby the visitors’ corner. An impression that would be later confirmed by PFC’s chairman Pierre Ferracci, who, reacting after the game, insisted that “there were not enough stewards to handle the OL ultras”.

The game started at 9:00 PM. In a sold-out Charléty, Gaëtan Laura surprisingly opened the scoring for the hosts in the 7th minute after a nice counter attack. The general atmosphere was superb, thanks to both ultras groups. After approximately 20 minutes in, as Lyon had finally taken control of the game, I spotted movement behind me. Charléty being a very small stadium, I could see the outside of the ground from my seat. A big crowd of individuals were escorted by several policemen, and I realised they were in fact a group of late OL ultras who had just arrived after their train was delayed.

When the rest of the OL fans joined the visitors’ corner, the away end started making much more noise and seemed more and more virulent – so much that I saw an entire family move away from their seats located near the visitors’ end.

Around the 40th minute, my girlfriend and I decided to leave our seats and go to the stadium’s toilets. It took us at least 5 minutes to reach them as they were in the opposite corner. We missed OL’s equaliser and only heard the half-time whistle from the stairs leading to the smoking area.

After a short cigarette break (we’re in France, after all!) we started heading back to our seats. Once we reached our sector, we were surprised to see most of the stand half empty with many people watching towards the OL sector. From then on, we heard several loud noises – probably homemade firecrackers – and saw flares being thrown from the upper part of the stand towards the ground.

Then, it got very confusing. Some OL fans managed to break the security barriers and enter the pitch, forcing the players to come back to the dressing rooms. Some more “neutral” fans took advantage of the confusion to enter the pitch as well. Some flares were thrown towards our stand by the hooligans who were on the pitch, which led to many people moving away rom their seats to find shelter on the upper stand.

Now, a word on what was, for us, the most traumatic part of the night: the walkway incidents. In the media coverage after the game was called off, few people mentioned what happened there.

In the minutes that followed the pitch invasion, some hooded hooligans, probably coming from OL’s sector, swarmed through the stadium’s corridors just next to us. Some had flares in hand, belts and of course, were hooded. Their arrival created a bigger stampede as they contested the main corridor. It lasted a few minutes, enough for us to see several things we never thought we’d see in a football ground.

The stampede was genuinely scary, and you have to imagine that the majority of the attendance was made up of families, young couples like us and ordinary people who just wanted to enjoy a good game of football. We were still at our seats when the hooligans raided our section of the stadium, and we were forced to reach a safe place up in the stand. What we saw was simply insanity: one of the hooligans in the walkway stole a knife at the hot-dog stand, leaving the vendors speechless. In the stampede, we also saw many young men and women having panic attacks.

The confusion on the pitch and in the walkways lasted around 15 minutes, only stopped by the riot piolice who finally arrived in the corridors and circled the OL fans sector.

After approximately 20 minutes of scenes that personally reminded me (keeping everything in proportion) of the chaos at the Stade de France during the 2015 terrorists attacks in Paris, the tension subsided, and we ended up leaving before the official announcement stating the game was cancelled.

Overall, we felt lucky to have been more or less spared by all the incidents that occurred but came back home disgusted by what we’d seen. Over the course of the night, many things were said on OL’s fans’ involvement in the incidents.

To be fair, I’m pretty sure the ones who led the charge were not proper football fans. Those thugs jeopardised the night of an entire stadium, of families, even of the regular OL fans who had made it to Paris to support their team.