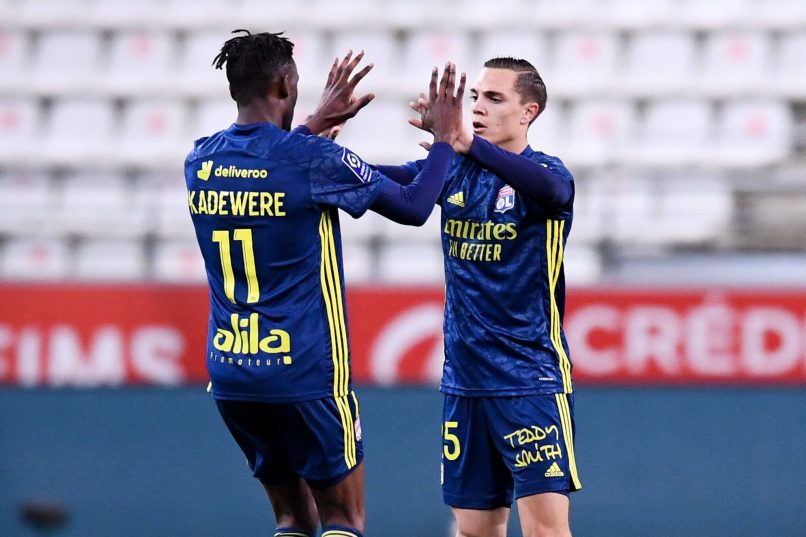 The competition for places in the Lyon midfield has, throughout the entire campaign, been extremely intense – the resurgence of Thiago Mendes, the more rapid than expected rise for Lucas Paqueta to key player status, the non-departure of Houssem Aouar, are all factors that many OL supporters would not have expected last September.

Add to this the rises of Bruno Guimarães and Maxence Caqueret, the latter talent shining especially brightly in the Champions’ League Final 8 last season, and this has been a tough area of the pitch for Rudi Garcia to make choices in as OL attempt a title challenge.

Aouar’s recent performances are however raising questions about whether he merits a spot in the starting XI in Rudi Garcia’s 4-3-3, a system that has worked in transition with Karl Toko Ekambi and Tino Kadewere as inside forwards with Memphis Depay in a free false nine role, considering Aouar’s recently horrendous showing against Reims and the positive impact that Maxence Caqueret had coming off of the bench.

Mendes and Paqueta are expected to retain their places, but Aouar continues this season to demonstrate that he is talented but inconsistent. As reported by L’Équipe, OL goalkeeper Anthony Lopes was heard on Friday night on the pitch criticising the French international for a lack of defensive efforts after he lost the ball in front of the opposition’s penalty box.

Lopes admitted that he was happy with Caqueret’s entrance vs Reims, replacing Aouar, to OLTV post-match: “We were able to get our heads back and the contribution of the substitutes was was incredible and above all “Max”, he was very, very valuable in our game in the second half.”

Caqueret’s progression this season has been stunted by the arrival of Paqueta, who has surprisingly dominated in occupying a box-to-box midfield role, when many onlookers expected him to play as a #10 following his spell at AC Milan. The 21-year-old however never gave up and appears to be ahead of Bruno Guimarães in the pecking order, with Brazilian already demonstrating at the Champions’ League Final 8 that the initial intercepting machine that he showcased himself as in first matches for OL was fast-dissipating.

Garcia might not act on the dynamics that were so obvious on Friday, but the truth is as a manager when the momentum swings away from you in a title race as close as this, you need to take decisive action. Aouar has demonstrated this season that he is largely nothing more than a luxury player, who continues to drift in and out of games and that his ability to fix the odd defender or make a nice-looping cross-field ball is not enough to succeed in an increasingly fast-paced division. Caqueret is a more rounded talent, matching his excellent positional nous and sense for breaking up opposition attacks with a range of passing and an increasing comfort with carrying the ball forward himself.

That said, Aouar has the ability to achieve the spectacular going forward, a sense of innovation that Caqueret has not yet displayed and vs PSG it seems likely that Garcia will continue to persevere with the more recognised attacking midfielder.

Alain Perrin summarised the situation to L’Équipe as follows:

“Aouar, I am not saying that he chooses his matches because it is not that, but he may have difficulty in motivating himself for small matches. He has the talent, it is not a question of abilities but rather of state of mind. It’s not easy to motivate, I experienced that with Dimitri (Payet) in Saint-Étienne and Hatem (Ben Arfa) in Lyon. They are there often in the big matches. A good professional must be able to be even if he does not splash his talent in every game.”