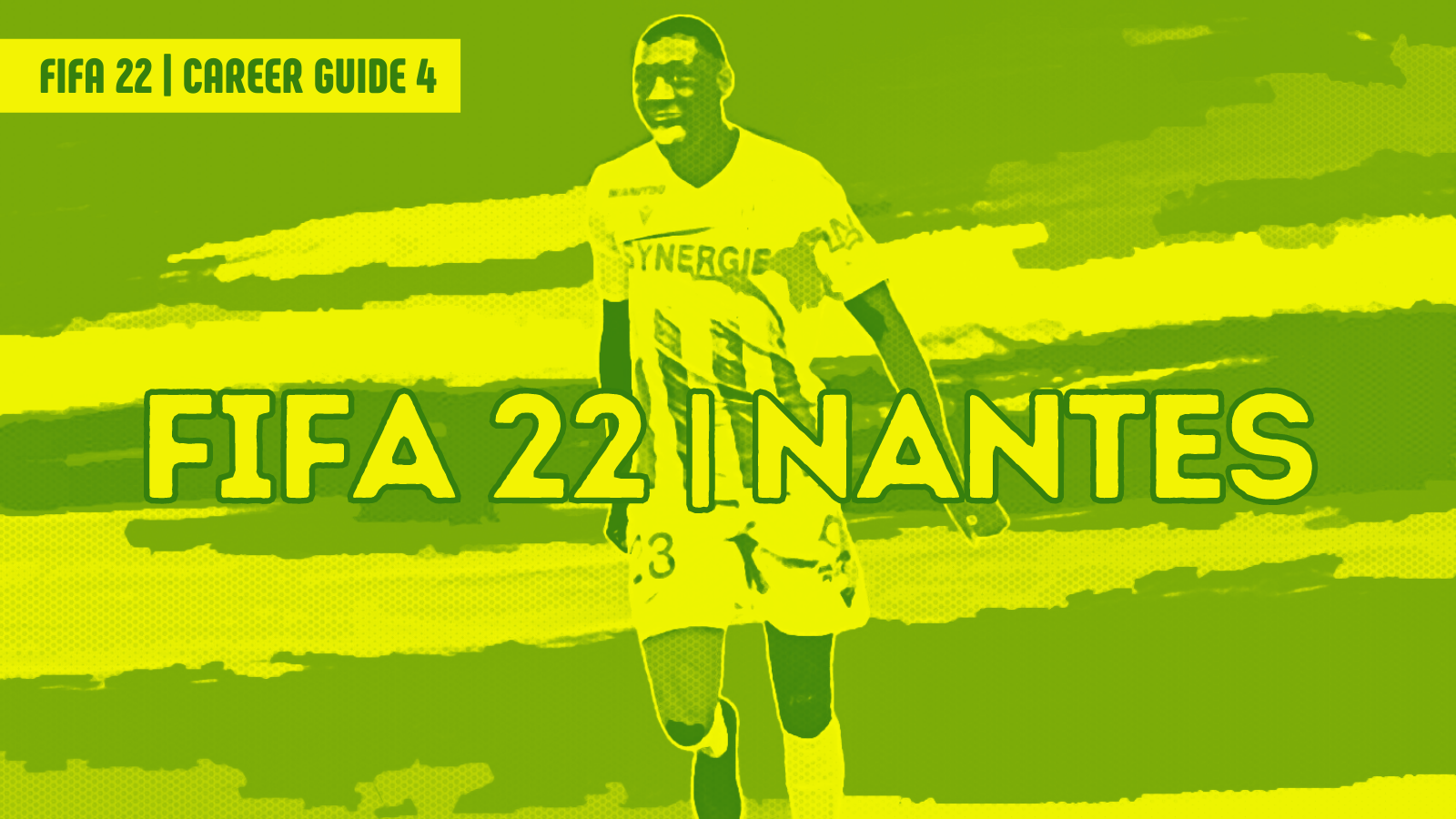 With the release of FIFA 22, GFFN’s Adrien Dryll takes a look at the best Ligue 1 and Ligue 2 clubs to take on your career mode journey. Next up: Nantes. You can follow the series in full here on GFFN.

History
Football Club de Nantes is one of Ligue 1’s most famous clubs, but one also severely lacking in success over the past two decades. Founded in 1943, the ‘Canaries’ have one of the best stocked trophy cabinets in France with eight league titles and three Coupes de France. Not to mention an unbroken record of 32 straight games without a defeat during the 1994/95 season. Nantes are also famous for a distinctive style of play developed in the sixties by José Arribas nicknamed “le jeu à la nantaise” (the Nantes style game). This philosophy of movement and simplicity became the club’s trademark and was later espoused by many Arribas disciples. It help the club become a heavyweight in the late eighties and nineties. In 1995, under Jean-Claude Suaudeau, Nantes won a seventh league title with a team made of players trained at the club’s Jonelière academy, such as Claude Makélélé, Raynald Pedros, Christian Karembeu and Patrice Loko. Suadeau’s men reached the Champions League semi-finals the following year, losing to Juventus. Following Nantes’ last league title in 2001, and especially the controversial Waldemar Kita’s takeover in 2007, the club became one of the most unstable in France, averaging a coach per season of late. This year, trained by the experienced Antoine Kombouaré, Nantes sit in mid-table after narrowly avoiding relegation last season.

Your Job
Make FC Nantes a force in Ligue 1 again by training young players from the academy and doing smart business. Try to win the league, set a new unbeaten record in Ligue 1 and establish the club as a regular league winner and perform in Europe.

Team Goals
– First two seasons: Stabilize the team in the top half and build a team capable of fighting for the Europa League spots while using your academy to train young prospects.
– Third and fourth seasons: Fight for a UCL place with at least one academy player in each area of the team. Get your promising players like Ludovic Blas, Alban Lafont and Randal Kolo-Muani to their full potential.
– Fifth season: Fight for national supremacy and try to win as many games as possible to set a new record.
– Sixth season: Perform well in Europe.

Team Breakdown – Budget: €7.4m
FC Nantes have some fun under the radar talents in their ranks. You’ll find 80 plus potential in every area of the squad except from defence where you’ll have to get creative in the transfer market. A 4-2-3-1, seen below, suits your players perfectly. In goal, you’ll find one of the most promising French keepers of his generation, Alban Lafont. In game, he has a potential of 83, but that could go much higher with dynamic growth.

Concerningly, your back four is made of thirty somethings who are unlikely to last more than two seasons. On the right, 73 rated Sébastien Corchia will be your starter. He isn’t too fast but still a decent all-rounder. Fellow 73 rated full-back Fabio will be decent for the first season, but will also need replacing. Centre-back reinforcements are most urgent. Your best partnership consists of the 73 rated Jean-Charles Castelletto and 33-year-old Nicolas Pallois. Castelletto has some interesting stats such as sprint speed (73), acceleration (72) and jumping (88) but he’s already 26 and only has a potential of 75. Pallois is the highest rated defender in your team but his 41 pace will be a problem at almost 34.

Fortunately, midfield is a little brighter. Former Liverpool man Pedro Chirivella and the Brazilian Andrei Girotto will sit. Chirivella is a good sentinel with some nice potential (78). At his best, the 24-year-old will mirror someone like Julian Weigl with good defence, nice stamina, and impressive passing stats. Girotto is already 29 but will be a decent defensive midfielder, or centre-back, for your first few seasons. He’ll bring height, strength and solidity but he also lacks pace.

Your front four is Nantes’ highlight. Your star player will be Ludovic Blas with a potential of 83. The 73 rated Marcus Coco on the right is a quick winger (88 pace) useful in breaching defences as a threat out wide with a decent shot. On the left is your next best player, Moses Simon. The 76 rated Nigerian has some very impressive physical stats such as 91 acceleration, 92 sprint speed, 90 balance, 92 agility, 89 jumping. Up front is the promising, 74 rated, 22-year-old Randal Kolo-Muani, train him well and he’ll become one of the best strikers in the league.

Star Player
Ludovic Blas (77/83): An easy pick. Blas has been one of Nantes’ star players this season and deserves the team’s best rating. Blas originally played as a wide number ten, mostly on the right side, which allowed him to cut on his left foot. In FIFA you’d be better off playing him in the middle to maximise his passing, dribbling and long distance shooting abilities. The only drawback with Ludovic Blas is his two star weak foot, but overall, with a potential of 83, you have yourself a real gem and your future captain.

Prospects
Randal Kolo Muani, 22 (74/83) – ST: As Thierry Henry’s reaction to Randal’s solo goal against Angers last month, and the goal itself, shows, Kolo-Muani has something special. In FIFA, his 74 rating will grow quickly and maybe surpass his base potential of 83. Kolo-Muani is the perfect modern striker. He’s tall (6’1), quick (82 Pace), skilful (81 dribbling) and a complete finisher (72 finishing and 75 heading accuracy). Use him as an attacking spearhead to take advantage of high line defences and exploit his broad range of abilities. His connection with Blas is one of the most promising in Ligue 1 right now.

Quentin Merlin, 19 (61/77) – CAM/LM: Merlin is la Jonelière’s latest prospect. The 19-year-old might not be the most exciting player in FIFA 22 but remains a good academy midfielder to train and introduce to your first team. Merlin has some good stats to develop, such as passing and dribbling. Our advice would be to loan him out for a season or two and then include him in your team. Loans can help your young players develop quicker if they manage to get the required game time.

Transfer Targets
Oumar Solet, 21 (71-80) – CB/RB: Red Bull Salzburg’s Oumar Solet is a real gem and has some of the best physical stats you’ll find for a defender this cheap. He’s tall (6’2) and threatening on set-pieces, but, most surprisingly, Solet is frighteningly quick, with an incredible 89 sprint speed as well as 80 acceleration. Train his defence a little to complement his 87 strength and he’ll soon be a starter. He’s valued at around €4m.

Edouard Michut– 18 years-old – (65-82) – CM: Ile-de-France is one of the biggest talent pools in world football and PSG, sometimes, take advantage of it. Edouard Michut is one of PSG’s most exciting prospects but won’t get much game time in Paris and for approximately €3m you could get a very good midfielder. Michut’s profile, once he’s fulfilled his potential, is similar to Jorginho or Marco Verratti and he could become a very good passer capable of breaking the lines. Although he’s unlikely to develop incredible finishing or defensive abilities, he could be used to launch Nantes’ attacks. You could also play him as a number ten.

Surplus To Requirements
Abdoul Kader Bamba, 27 (72-72) – LM/LW: The French winger is on loan at Amiens but you could bring him back, put him on the transfer market and sell him at a fair price. At 27, he’s unlikely to bring anything significant to your team, even as a substitute.