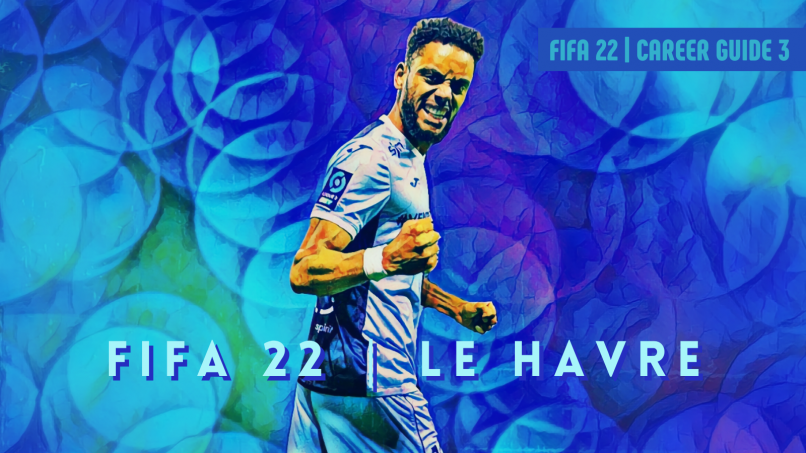 With the release of FIFA 22, GFFN’s Adrien Dryll takes a look at the best Ligue 1 and Ligue 2 clubs to take on your career mode journey. Next up: Ligue 2 club Le Havre. You can follow the series in full here on GFFN.

History
Le Havre is a fascinating city. It’s one of Europe’s busiest ports and known for its shipping container-shaped concrete buildings erected after bombing during World War II. Its football team, Le Havre Athletic Club, is just as fascinating. Founded in 1872 by English workers, the club remained in the lower divisions until 1985 when they were finally promoted to the first division. While Le Havre have failed to maintain top flight status, eventually finding stability in Ligue 2, the Normandy side is known for its prolific academy. Steve Mandanda, Dimitri Payet, Paul Pogba, Edouard Mendy, Riyad Mahrez, Guillaume Hoarau and Ferland Mendy are all graduates. Unfortunately for Le Havre, their best prospects rarely stay long, making progressing difficult for a first team that, at the time of writing, sits a promising fifth in the second tier table.

Your Job
Help Le Havre clinch a Ligue 1 spot and establish a consistent top flight presence by training players from your academy before fighting for a place in Europe.

Team Breakdown – Budget: €5.2m
Le Havre will be a fun team to use in career mode, but it won’t be easy. To begin with, the squad isn’t the most exciting but still has some potential to grow and has a good mix of experience and youth. In goal, you’ll have the choice between former Lyon man Mathieu Gorgelin and the young Yahia Fofana. Mirror Paul Le Guen and go with the latter, he’s just 20 and has some decent potential (75). Your defence is made of Thierno Badé, a 19-year-old right-back with 75 potential, Nolan Mbemba, a 65 rated out of position midfielder playing at full-back plus the 33-year-old Pierre Gibaud and the 73 potential Ferland Mayembo at centre-back. This is where you’ll need your academy most.

Your wingers, meanwhile, are two of your best players. On the right the 66 rated Quentin Cornette is, by far, the fastest player in your team with 90 acceleration and 89 agility, but he’s a poor finisher and has no significant potential. Nabil Alioui (22) is Le Havre’s playmaker. He’s not that fast (69 pace) but has four star skill moves and weak foot. With 74 potential he will grow nicely and could provide a few assists from the left. In the centre of the 4-4-2 seen below, you’ll find the 68 rated Victor Lekhal and Jean-Pascal Fontaine (32). Algerian international Lekhal’s rating doesn’t reflect his qualities. He’s tall (6’1), has decent pace (74) and some nice physical attributes such as a whopping 90 for jumping that’ll make him an aerial threat on set-pieces, plus 79 strength and 76 stamina. Fontaine, is a slower and smaller version of Lekhal and he’ll be useful to start with given his shooting ability (72 shot power, 71 long shots), some good stamina (82) and his 73 free-kick ability.

Up front, pair the 69 rated Pape Ba and the 68 rated Jamal Thiaré. Both are 28, so you’ll soon need to introduce other options from your academy, but they’ll be decent for the first two years. Ba is a 5’7 powerful striker. Although not the fastest, with only 72 pace, his finishing (72), some good shot power, strength (77) and stamina (76) will be useful. Thiaré has good pace (84), good jumping (80) and some solid stamina too. The combination of these two forwards will guarantee you goals in Ligue 2 and be a real threat.

Star Player
Jamal Thiaré (68/68): It’s close but Thiaré should be a key player early on as your biggest goal threat. His 84 pace, combined with 72 strength and 87 agility make him a real danger. Play him as a darting forward, calling for the ball deep between the lines. His height and jumping make him an aerial threat from set-pieces or as a target on crosses. Finally, he has the perfect work rate (high/medium) which will see him always on the move and attacking. Unfortunately, he won’t develop much being 28 and not having any potential.

Prospects
Abdullah Ba, 18 (63/76) – CDM/CM: The teenage centre midfielder is the youngest player in your team and also the one with the highest potential. He’s only rated 63 to start with but will grow rapidly as an all-round midfielder, capable of playing almost everywhere, even if he doesn’t stand out in any particular area. Train him well and he’ll quickly make it into your starting eleven.

Yahia Fofana, 21 (64/75) – GK: If there’s one position you’ll have to strengthen, it’s in goal. Yahia could well be your man as the Malian is only 20. His potential of 75 might seem low but if you play him regularly and train him well, he could easily outgrow that and become a key player, at least for the first two or three seasons until you find an academy player to challenge him.

Transfer Targets
Jonathan Panzo, 20 (70-77) – CB/LB: Le Havre have a strong connection with England, so why not go for a British player? Panzo is your man. The former Monaco prospect isn’t an obvious option but could be a real asset. Panzo is versatile, often used at centre back but is also capable on the left, which would be perfect for Le Havre who don’t have a natural left-back. In Panzo you’ll find a strong and quick defender with some good passing stats. Train him well and he’ll soon become the main man at the back. For €2.9m, he’s a bargain.

Alan Virginuis, 18 (65-79) – RW/LW: Keep scouting Ligue 2. Available for less than €2m, the pacey, skilful and incisive winger Virginius of Sochaux has an interesting potential of 79 that could well go higher if well trained. He could be your super sub or soon take a starting spot. However, his finishing is poor as is his passing and crossing, so you’ll have to focus on improving those areas.

Surplus To Requirements
Ertuğrul Ersoy, 24 (69-76) – CB: The Turkish centre-back is on loan at Gaziantep. Recall him and sell him. His age plus his rating could get you a few easy millions to spend on some quality scouts or even some players on the transfer market.