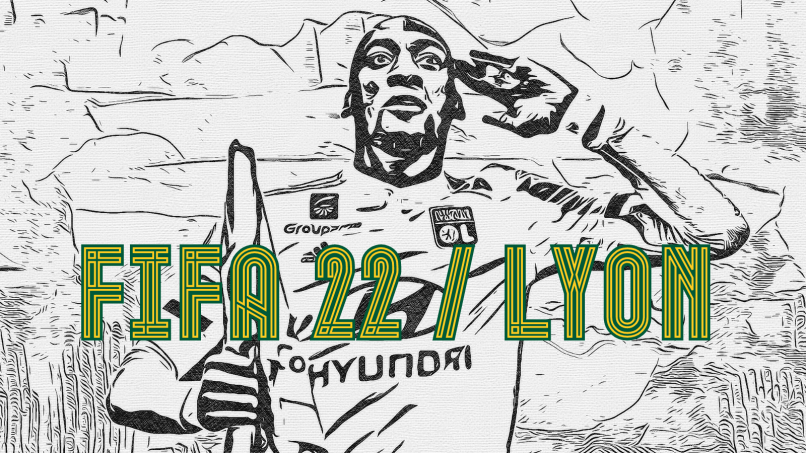 With the release of FIFA 22, GFFN’s Adrien Dryll takes a look at the best Ligue 1 and Ligue 2 clubs to take on your career mode journey. Next up: Lyon. You can follow the series in full here on GFFN.

History
Two decades ago, Olympique Lyonnais reigned supreme, winning seven consecutive Ligue 1 titles between 2002 and 2008, a record yet to be beaten. Although Olympique Lyonnais’ history goes back to 1950, it’s inextricably bound to one of the most influential figures of the French football scene: Jean-Michel Aulas. The Rhône entrepreneur took over the club in 1987 and changed its destiny forever by investing massively and signing big names.

The club’s noughties success was embodied by the likes of Sonny Anderson, Sidney Govou and especially Juninho Pernambucano. The magical Brazilian became a club legend thanks to his leadership, mastery and, of course, free-kick brilliance before becoming sporting director in 2019. His task was to make Lyon great again with limited funds while relying on an academy that consistently produces elite talent. From Karim Benzema to Houssem Aouar, Alexandre Lacazette, Samuel Umtiti, Nabil Fekir, Hatem Ben Arfa, Corentin Tolisso and, more recently, Ryan Cherki, the list is frightening. In the last decade, the club relied a lot on this incredible resource to keep up with PSG, AS Monaco, Lille and Marseille, but in the last couple of seasons Lyon have been erratic in the league despite reach the Champions League semi-finals in 2020, defeated by winners Bayern Munich. This season under Peter Bosz Lyon added big names like Jerome Boateng and Xherdan Shaqiri and are aiming for the podium.

Your Job
Make OL the best team in France and a serious contender for European silverware.

Team Goals
First two seasons: Win the Ligue 1 title.
Third and fourth seasons: Build your team using your financial resources and academy. Try to win as may league titles in a row as possible.
Fifth season: Train the next Karim Benzema and fight for European supremacy.
Sixth season: Win at least one UCL title.

Team breakdown – Budget: €50m
This Lyon team is perfectly fitted for career mode. It has depth, talent, potential and money. Go for a diamond 4-4-2 as  OL don’t have many quality players on the wings. In goal, you’ll find Anthony Lopes. He’s 30 but remains one of the best keepers in Ligue 1 with strong reflexes (86) and diving (84). Emerson will be your undisputed starter at left-back but you’ll have to find a decent replacement when he returns to Chelsea after his loan. On the right, Léo Dubois will do for the first two or three seasons, but you’ll have to look for a replacement in the years to come, academy talent and 81 potential Malo Gusto could be your man. In the middle, Belgian stopper Jason Denyer is an overpowered player that’ll guarantee stability. He’s tall, fast and only 26. His partner in crime is Bayern Munich legend Jerome Boateng. In FIFA, he remains a solid option at the back despite being 32 with 72 pace and 84 defending but he’ll soon need replacing.

At the bottom of the diamond, Bruno Guimarães (24) will be your man. The Brazilian is 80 rated and has a potential of 85. His stamina (84), combined with his brilliant passing ability (83 long passing, 84 short passing) will make him a real anchor in midfield. On the right of the diamond is Maxence Caqueret. The little 21-year-old Frenchman is 78 rated and could go up to 85. Take advantage of his pace (73), stamina (86) and agility (87) to make him your midfield sweeper. On the left is one of OL’s most promising talents Houssem Aouar. His base potential is 85 but with training and game time that could go much higher. His dribbling, passing and vision will be his best attributes, use him as the creator alongside Lucas Paquetá. The Brazilian has been OL’s X-factor this season and will be in FIFA as well. Paquetá has everything and is the definition of the modern attacking midfielder with pace (75), passing (80), shooting (with 78 finishing) and dribbling (86 ball control and composure). Add some decent physicality (84 stamina, 75 strength, 79 jumping) and you’ll have the worthy successor to Kàka.

Paquetá will feed your striking partnership made of Moussa Dembélé and Karl Toko-Ekambi. The 24-year-old Dembélé is a strong, stocky striker that will offer options on set-pieces (86 jumping, 81 heading accuracy). He is strong (85 strength) and has some good finishing and shot power, 80 and 82 respectively. Use him as pivot to feed his darting colleague Toko-Ekambi. The Cameroonian is pacey, skilful and a good finisher. Use his winger abilities to call for the ball between the lines.

Star Player
Lucas Paqueta, 24 (82/87) – A lot has been said about Paquetá since the beginning of the season, and rightly so. The Brazilian is the creative player that OL needed to replace Memphis Depay. In truth, the entire team is built around him. In your career mode, try to create a Juninho-esque story by keeping him as long as you can at the club. At his full potential, he’ll become an absolute beast that will help you win titles.

Prospect
Ryan Cherki, 18 (73/88) – Cherki has been on everyone’s radar for a long time and he has everything to become an overpowered skilful winger. He has a five star weak foot and five star skill moves, a rare trait that he shares with the likes of Neymar. At 18, he’s the definition of a gem that’ll need to be polished. His 88 potential could go higher once he plays regularly and performs.

Transfer Targets
Owen Wijndal, 21 (79-84) – With Emerson only on loan, you’ll have to find a replacement left-back. The Dutchman is a promising young player at AZ Alkmaar with all the abilities of a modern full back: pace (84), stamina (86), good passing (74) and decent defending. This last part will need to be trained but overall he could become one of the most complete full backs in the game. He’s relatively expensive (around €25m) but you should definitely go for him in your first or second season.

Axel Disasi, 23 (77-82) – The aging Jerome Boateng will be your starter in the first two seasons but you’ll quickly need a backup that will be able to replace him. Monaco’s Axel Disasi is your man. The French centre-back is a strong (92 strength) player that will guarantee solidity at the back. Even though he’s slower than Denayer, their partnership could be very interesting in the near future.

Marcus Thuram, 23 (79–85) – The son of Lilian has had a hard time of it recently. End his misery and bring him back to France. Thuram has an usual combination of pace, strength and skill. Upfront, as a lone striker or in a pair, he’ll be a constant threat. The standout stats you should know about are his height (6’2), his strength (87), his finishing (80), his dribbling (84) and his heading accuracy (80). Train him well and he’ll become your opponents worst nightmare. He’ll be available at around €28m.

Surplus To Requirements
Tino Kadewere, 25 (76-79) – Kadewere has been struggling recently. The Zimbabwe forward is valued at around €15m and you could get more if you negotiate well. Selling him could help you fund other transfers in positions that really need to be doubled up on.

Thiago Mendes, 29 (77-77) – Mendes is another player that has lacked playing time recently. At 29, the midfielder won’t improve his general rating and it would be the perfect time to sell him as he still has some decent value on the market – around €10m.