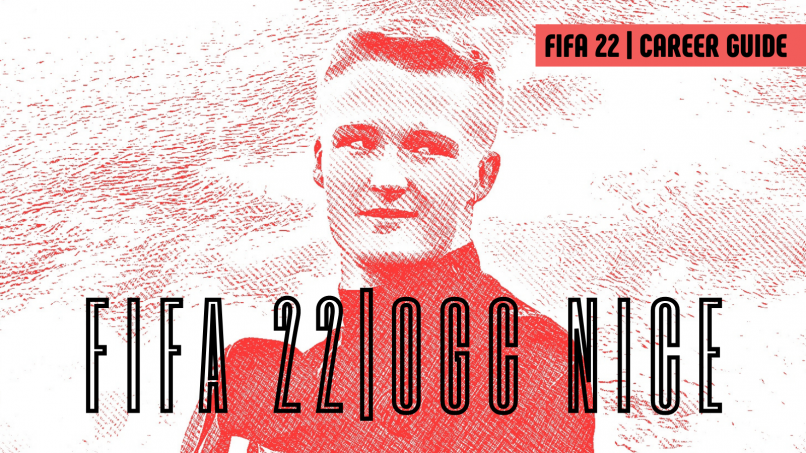 With the release of FIFA 22, GFFN’s Adrien Dryll takes a look at the best Ligue 1 and Ligue 2 clubs to take on your career mode journey. Next up: OGC Nice. You can follow the series in full here on GFFN.

History
Founded in 1908, the Olympique Gymnaste Club de Nice are one of the South of France’s biggest clubs. Nice won all four of their league titles between 1951 and 1959, the club’s golden era, and have since regularly played an important role in Ligue 1, especially in recent seasons. In the 2015/16 season, Hatem Ben Arfa led Les Aiglons to a Europa League spot before Lucian Favre and players like Mario Balotelli finished third the following year. These performances confirmed the Côte-d’Azur side’s status as one of the best run clubs France, and this was reinforced by British petrochemical group Ineos’ 2018 takeover which allowed Nice to spend big to bring in young talented players like Danish striker Kasper Dolberg. This season could be a big one for Nice after a host of summer arrivals including reigning Ligue 1 title winning coach, Christophe Galtier.

Your Job
Make Nice the new dominant force in the South of France, in Ligue 1 and, eventually, Europe while maintaining the club’s recruitment strategy by spending your money wisely on young talents.

Team Goals
– First two seasons: Fight for a spot in Europe and develop your players.
– Third season: Become the dominant side in the south over Marseille and AS Monaco and try to win the Coupe de France.
– Fourth season: Develop your players and fight for the title.
– Fifth season: Win Ligue 1 and perform in the Champions League.

Team Breakdown – Budget: €14.7m
With OGC Nice, you’re in for a treat. Les Aiglons are one of the most exciting Career Mode teams in the game. There’s talent in every area of the squad. In the suggested eleven, shown below, we’ve chosen to stick to Christophe Galtier’s 4-4-2 as it will fit Nice’s players perfectly.

In goal, Argentine Walter Benitez is an excellent keeper in real life and not bad at all in the game, with a rating of 80 and a potential of 82. Your net will be in good hands. The back four has a mix of talent and experience. Pacey, quick and agile, right-back Youcef Atal (90 PAC) will be your first choice. Atal lacks defending quality, however (only 70 DEF), so you might want to train these attributes. At left-back, Galtier goes for the former Lyon academy prospect Melvin Bard. In the game, however, he is only rated at 72 so go with the 77 rated Hassane Kamara instead. His main attribute is pace, rated at 88. He adds balance alongside Atal and both are good counter-attacking players.

Brazilian veteran Dante and French talent Jean-Clair Todibo are paired at centre-back, they’re both 76 rated but at very different stages of their careers. Dante is now 37 and could be let go but Todibo has a potential of 84 but he will grow even further with dynamic potential if you train him well. He has everything, from height (6’2) to pace (76) and is one of the best young centre-backs in Ligue 1.

Two Dutchmen patrol the wings: Justin Kluivert and Calvin Stengs. The former is only on loan but remains a pacey, skilful winger with a four star weak foot and, most importantly, four star skill moves. Train his finishing and he’ll become a classy winger capable of creating chances for your strikers. Stengs, meanwhile, signed from AZ Alkmaar this summer and is more of a wide attacking midfielder. He isn’t very quick but has a potential of 84. Centrally, your midfield pair is made up of former Marseille man Mario Lemina and newcomer Pablo Rosario, both are 76 rated and perfect in box-to-box roles.

Nice have several options upfront but two stand out: Amine Gouiri and Andy Delort. Gouiri has been Nice’s best player for some time now. In game, he’s rated at 78 and has an exciting 85 potential. He is rapid, skilful and the perfect foil for Delort, you’ll want him to go deep between the lines. Delort is more of a ‘bull’, strong and fast with some good shooting stats – strength at 87 and power at 89 – which will make him a threat from distance.

Star Player
Amine Gouiri (78/85): Gouiri boasts Nice’s highest potential rating. If well trained, he could become a complete forward, capable of playing everywhere across the attack. He has four star skill moves and some decent finishing (81). He’s only 21 and will contribute goals and assists for many seasons. Try to make him the club’s talisman but if a big offer arrives once Gouiri’s overall rating has increased, sell him at the highest price possible and reinvest that money in young prospects.

Prospects
Képhren Thuram (75/83) – CDM/CM: The son of former France full-back Lillian is a gem. At 20, he’s already rated 75 and has considerable potential while being tall (6’2) and quick (75 PAC) like his father. In midfield, he’ll act like an octopus, tackling and sweeping the field to help regain possession.

Alexis Claude-Maurice (77/83) – LM/CAM: After a serious injury, Claude-Maurice has been a little forgotten but, at 23, he remains an exciting prospect. He can play in a variety of roles, is pacey and very skilful. With a rating of 77, he could be used as an impact substitute while in competition with Stengs and Kluivert. Train his finishing and he’ll become one of the best attacking midfielders in the league.

Transfer Targets
Armel Bella-Kotchap, 19 (71-85) – CB: With Dante’s best years behind him, you’ll need to find a replacement. Bella-Kotchap plays for the newly promoted Bundesliga side VFL Bochum. He’s tall (6’2), quick (76 PAC) and very strong (85 physical). He has all the attributes of a modern centre back and will grow rapidly if you play him and train him well. He’s valued at a very affordable €5m, so you’ll get your money’s worth, and alongside Jean-Clair Todibo, you’ll have a talented centre-back pairing in the making.

Facundo Hernan Farias, 18 (72-84) – CF/ST: Farias is a small Argentine centre forward capable of playing as a second striker or on the wings. Farias is pacey (89 acceleration), has a low centre of gravity that makes him a good dribbler and some solid finishing (72). He could be used as a versatile attacker should you sell Kasper Dolberg and will bring a different profile to the attack. Farias plays for Colòn in Argentina and you’ll be able get him for a mere €6m – a real no brainer.

Surplus To Requirements
Dante, 37 (76-76) – CB: In real life, Dante remains a solid defender, even though he’s clearly nearing the end of his career. In FIFA, you won’t need him. Due to his age, his rating will keep dropping and you’ll soon need to find a decent replacement to play alongside Todibo.

Kasper Dolberg, 23 (79-83) – ST: Dolberg is your super-sub striker and he’s only 23 years old but selling him makes sense in a number of ways. Firstly, he has some decent stats but isn’t too quick nor does he boast incredible finishing. Secondly, now is the best time to sell, as he’s valued at around €22.5m. If you negotiate well, you get €30m to reinvest in other players on the transfer market, a centre back for example.