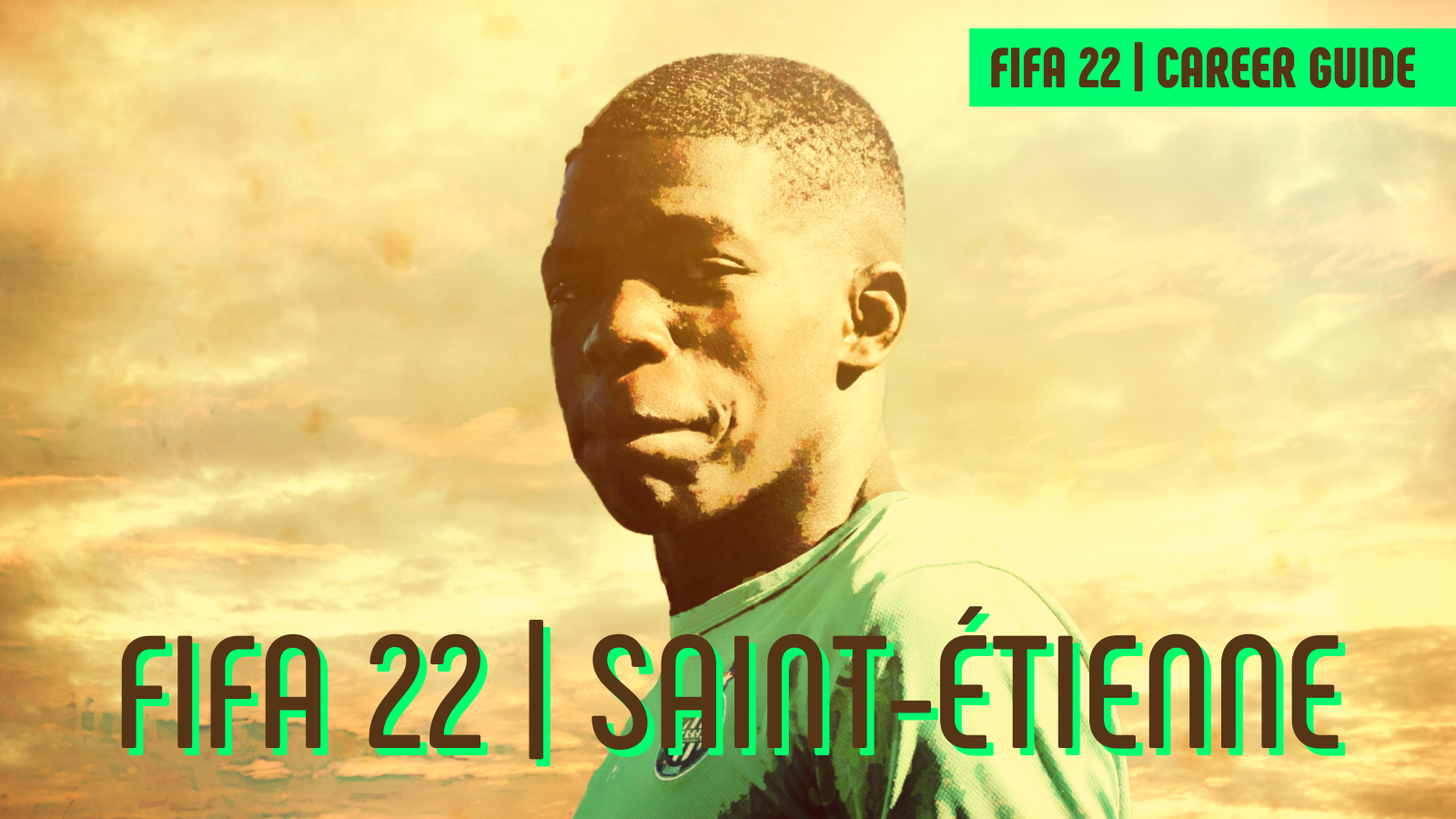 With the release of FIFA 22, GFFN’s Adrien Dryll takes a look at the best Ligue 1 and Ligue 2 clubs to take on your career mode journey. First up: Saint-Étienne. You can follow the series in full here on GFFN.

History
Founded in 1919, AS Saint-Étienne carry significant presence in French football. Les Verts hold the record for the most first division titles, having won 10 between 1957 and 1981. The club left an indelible mark on fans in the 1970s as by far the most popular French team thanks to a series of European Cup runs. Their 1976 European Cup final loss to Bayern Munich remains one of French football’s most legendary games. More recent years have been complicated for the Loire side, currently bottom of Ligue 1, the 2021/22 season could even see them relegated.

Your Job
Help Saint-Etienne regain their former glory and become a giant of French and European football once again. Train promising French players to achieve your goals without breaking the bank.

Team Breakdown – Budget: €12.1m
On paper, Saint-Étienne have a relatively balanced first team as far as ratings are concerned, with the average around 74 or 75. In defence, the best player will be Harold Moukoudi with a rating of 75 and a potential rating of 80. The same goes for the keeper Etienne Green who is an interesting prospect with a rating of 72 at the beginning of the game but a good potential of 81, that may go even higher thanks to the dynamic growth feature should you train him well. The two defensive midfielders have the same rating and potential, both can be trained and Mahdi Camara especially can become quite exciting. In attack, Denis Bouanga can play anywhere in attack but is best providing width on the left and will be able to cut inside on his right foot while Arnaud Nordin on the right is quicker and will rely on his stronger foot. Adil Aouchiche is best used in the middle and will grow rapidly. The team’s biggest weakness is the lack of real number nine. Although he has a good long range shot, Khazri is not the quickest, the strongest or the most clinical, but he can play as withdrawn striker and create spaces for Aouchiche, Bouanga and Nordin with his passing ability. At times real life coach Claude Puel has used a back three, here you might want to try a more conventional shape however. Although the 4-2-3-1 shown below is rather standard it will get the best out of your forwards.

Star Player
Denis Bouanga (76/77): The Gabonese winger or centre-attacking midfielder can play everywhere upfront. He has four star skill moves, a four star weak foot and has often been his team’s X-factor in real life of late. In the game, he’s a fun player to use and will be perfect to lead the attack in the first few seasons. Unfortunately, he’s already 26 and doesn’t have much potential but with dynamic growth, you never know, and he could go as high as 80 or 81.

Exciting Prospects
Adil Aouchiche (74/82) – CAM/LM: The attacking midfielder is rated at 74 but will rapidly improve if you use him correctly. With a base potential of 82, he could soon be your star player. He’s agile, quick, and already a good passer. Although he’s best as a central player, he’s versatile and can play across the attack.

Lucas Gourna (70/83) – CDM/CM: Although he’s 70 rated to begin with, Gourna boast ASSE’s the highest potential with 83. He’s tall and good on the ball and, if you train him well, he’ll eventually become the complete defensive midfielder. As the future of the club, try sign him on a long-term deal and make him a “one club man”.

Transfer Targets
Yari Verschaeren, 19 (73/83) – CAM/RW – €6.5m – Anderlecht: Apart from Denis Bouanga, Adil Aouchiche and Arnaud Nordin, the options upfront are limited and Belgian attacking midfielder Yari Verschaeren could be a reasonable and realistic option. He can play in support of the striker or on the right and will grow rapidly. He’s not so fast but has four star skill moves, some decent passing and a release clause of €11m, but he’s available for less.

Michel Ange Balikwisha, 20 (70-83) – ST/RW/LW – €3.8m – Royal Antwerp: Keep scouting in Belgium! As an attacking reinforcement, the Belgian forward is a pacey little forward, capable of playing upfront, as well as on the wings. With 82 pace he’s already rapid. You’ll need to train his finishing (69 at the beginning) but he could be a super sub in your first two seasons and then slowly take over from the aging Whabi Khazri.

Surplus To Requirements
Romain Hamouma, 34 (75/75) – ST/RM/CAM: You won’t get a lot of money from Hamouma but he likely won’t get much game time. Plus, he doesn’t have the best stats, is slow and in the twilight of his career.

Ryad Boudebouz, 31 (74/74) – CAM: Just like Hamouma, Boudebouz won’t be too useful, he’s aging, doesn’t stand out particularly and has one of the club’s highest salaries. Try to sell him for a couple of million to make room for younger players.

How much global interest will Messi generate for Ligue 1?