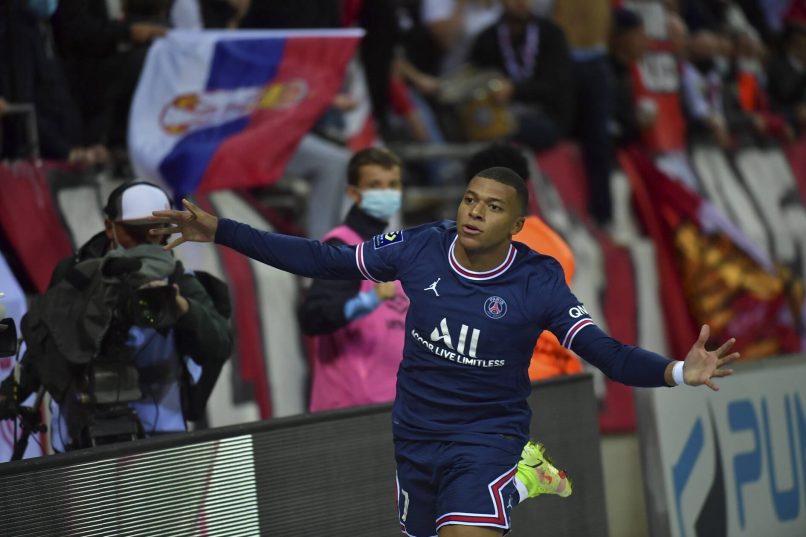 GK, Anthony Lopes (Lyon) – A classic Lopes display. Although Nantes more than held their own in the 1-0 loss to OL, Lopes made a string of flying stops – one from Jean-Charles Castelletto’s first half header was quite astonishing – giving the sense that the Portuguese keeper would be unbeatable on the night.

FB, Jonathan Clauss (Lens) – Quietly one of the players of the season in Ligue 1 last term, Clauss’ supreme crossing ability from wing-back is key for Lens and the Frenchman’s whipped free-kick for 1-0 was a highlight as Lens drew with Metz 2-2, while his progression of play on the counter lead to a second for Seko Fofana.

CB, William Saliba (Marseille) – The Arsenal loanee scuffed a big chance wide early on but was supreme defensively in Marseille’s 3-1 win over Saint–Étienne, showing the serenity and assuredness that made him so exciting when breaking through with Les Verts. Despite a couple of concentration lapses, this was by far his best display for OM so far.

CB, Sven Botman (Lille) – He has started the year a little shakily but after one or two nervy moments early on in Lille’s victory over Montpellier the Dutchman grew in stature as the game progressed, making some crucial interventions. His arrowed long ball put Jonathan David through for what turned out to be the winner.

FB, Achraf Hakimi (PSG) – It might be simpler to just give the Moroccan international the award for most Team of the Week nominations this season. This wasn’t his best PSG display in his short Ligue 1 career but his curled cross on the counter invited Mbappé to tap home and seal PSG’s win at Reims having again been a threat throughout.

DM, Pablo Rosario (Nice) – Commanding and classy in midfield as Nice swept aside Bordeaux. His passing was positive, neat and crisp while the new signing from PSV is developing a strong on-field bond with Mario Lemina.

CM, Mattéo Guendouzi (Marseille) – His surprisingly attacking role in these opening weeks meant he was in a position to follow up for Marseille’s opener in the 3-1 win over ASSE before his skimming shot flicked the post prior to half time. Typically a little erratic at times but his intensity and driving of play was central to an all-action OM display.

AM, Dimitri Payet (Marseille) – Glorious at times against Les Verts in a 3-1 win with some lovely touches during build up play, one of many clever passes initiated the attack that led to Mattéo Guendouzi’s strike and he even pressed well at times, one such pressure resulted in Ünder’s third.

WF, Amine Gouiri (Nice) – Not everything came off for the 21-year-old but he was again devastating at times as Nice thrashed a hapless Bordeaux 4-0. A nonchalant flick instigated Nice’s second on the counter, a move Gouiri rounded off himself, before winning the penalty and slamming home an unstoppable spot kick.

WF, Cengiz Ünder (Marseille) – His cross led to OM’s opener and he sealed the points against Saint–Étienne with a lovely shaped finish from the edge of the area. He did flit in and out of the game but his pace and direct style again caused issues.

ST, Kylian Mbappé (PSG) – Netted a brace to help PSG ease past Reims 2-0 – a pair of poacher’s finishes. First, a clever run in between defenders to nod home Angel Di Maria’s pinpoint cross before peeling away at the back post to tap home another lethal cross from Achraf Hakimi.