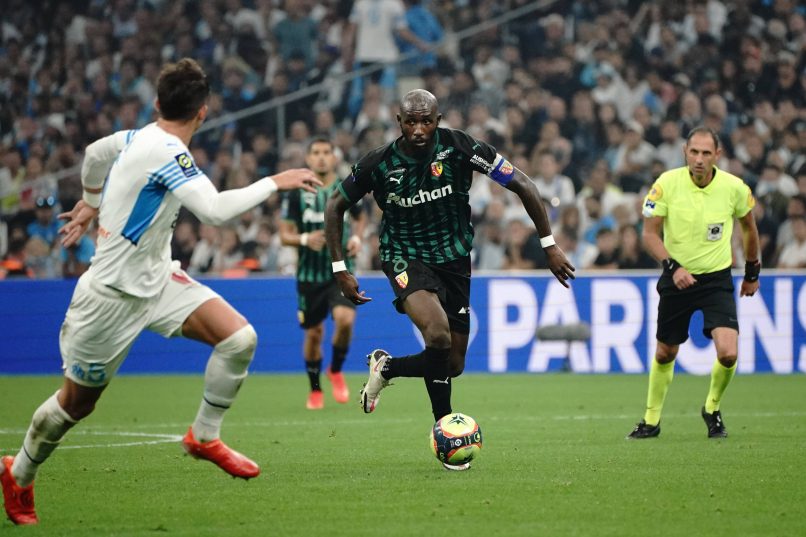 GK, Benoît Costil (Bordeaux) – There was little he could do about Rennes’ goal, or his team’s incompetence, but repeatedly kept them in the game. Diving at Sulemana’s feet, a flying second half stop from Terrier and a reaction save with his knee from Meling at close range stood out as Bordeaux somehow mustered a draw having been dominated by Rennes.

RB, Przemysław Frankowski (Lens) – No Clauss, no problem. A more than able outlet on the right flank for Lens in a thrilling 3-2 win at Marseille, having added real balance from the left this season, and scored the goal of the game with a left-footed curling effort from the corner of the area.

CB, Mexer (Bordeaux) – Might have kept closer tabs on Laborde for Rennes’ goal but made two crucial interventions in the first half after mistakes from others and defended astutely throughout and it was his deflected shot that brought the equaliser and an unlikely point for Bordeaux.

CB, Presnel Kimpembe (PSG) – A much more bullish and focused display for PSG from Kimpembe than has become the norm this year and it was needed in a far more troublesome evening than the routine looking 2-0 score line against Montpellier suggests.

LB, Caio Henrique (Monaco) – Produced a pair of crucial assists to help Monaco come from behind to beat Clermont, both from low balls for Volland and Ben Yedder from the left.

DM, Idrissa Gueye (PSG) – Often wrestled back possession in covering significant ground during a poor PSG display against Montpellier, despite their 2-0 win with both Neymar and Kylian Mbappé wasteful, and fired home a superb opener from the edge of the area.

CM, Seko Fofana (Lens) – Affected the game with seemingly every touch of the ball in helping Lens beat Marseille. A persistent danger in progressing the play on the counter with power and pace, very tough to dispossess, and used possession astutely throughout as a key threat and creative influence for Lens.

AM, Dimitri Payet (Marseille) – Faded a little in the second half but kept Marseille in it against Lens with a lovely, shaped free kick before calmly converting the penalty, his passing was glorious at times.

FW, Andy Delort (Nice) – Galtier was looking for another experienced forward and, after Burak Yilmaz helped Galtier’s Lille to the title last season, he might have again made the signing of the season in the process. Delort was orchestrator-in-chief as Nice counter-attacked their way to 3-0 win at Saint-Etienne, nipping in at the back post for the third and pulling ASSE’s back line apart in tandem with Amine Gouiri throughout.

FW, Amine Gouiri (Nice) – Not everything came off for him in Nice’s 3-0 win over Les Verts but his direct, skilful dribbling and decision making on the counter were almost impossible to handle at times, as was his interplay with Delort. More people should be talking about Gouiri as a potentially world class talent.

FW, Florian Sotoca (Lens) – Outstanding for Lens in a 3-2 win at the Velodrome. Showed a steady hand to slot home the penalty and then provided two clever assists. Firstly, a flicked header put Frankowski away for 2-0 and then a pinpoint whipped cross invited Saïd to head home for 3-2.