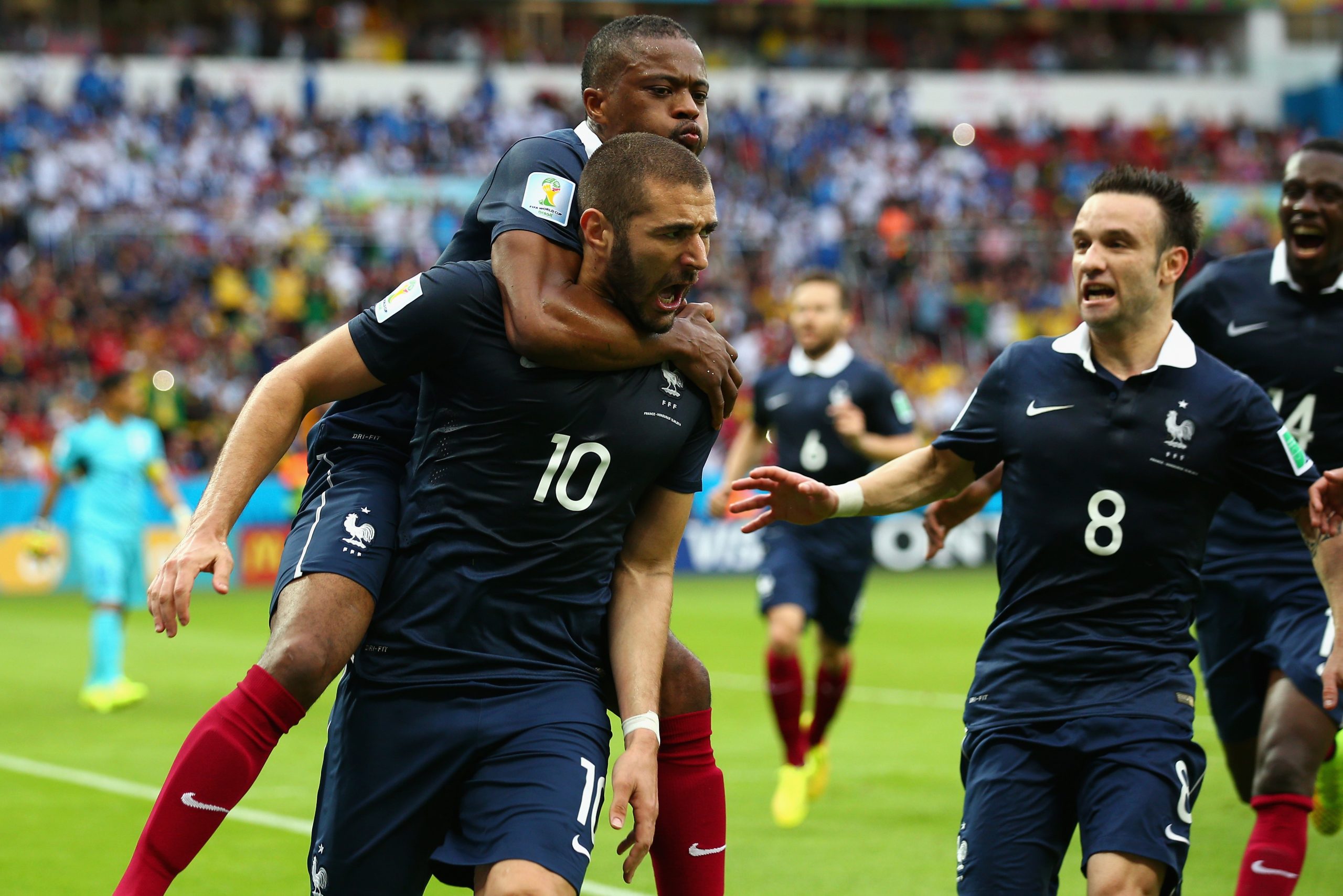 France striker Karim Benzema’s trial for alleged complicity in the act of blackmail has begun this Wednesday in Versailles, with proceedings set to go on for three days.

The events in question go back to 2015, when then-France midfielder Mathieu Valbuena received several phone calls from a group of blackmailers over a sextape of his in their possession. Later in the year, and after an investigation was opened by authorities, his international teammate Benzema would speak to him about the video in question, which then saw the forward temporarily placed under police custody and banished from the national team for nearly six years.

After a failed appeal by Benzema with regard to alleged underhanded tactics used by police investigators, as reported by L’Équipe, a trial was set at the start of the year.

5 men have been put on trial: Axel Angot, Mustapha Zouaoui, Younes Houass, Karim Zenati and Karim Benzema. The first 4 for attempted blackmail, the latter for complicity in the act of blackmail. If convicted, Benzema could face up to 5 years in jail and a €90k fine.

The trial began this morning with four of the five accused present, with the Real Madrid striker absent. Maître Iweins, one of Mathieu Valbuena’s lawyers, had made it clear to the individual presiding over the court that Karim Benzema’s absence from today’s proceedings was regrettable, and possibly spoke to a lack of taking the process seriously.

RMC Sport report that Valbuena himself began by explaining that it was former France striker Djibril Cissé who had first warned him about the video, adding that “I never thought about giving money so that this video didn’t come out”. The Olympiakos man went on to explain that he had felt threatened – “I felt I was in danger and my instinct was to file a complaint. […] Football is my life. I knew that if this video came out, things would be difficult with the French national team”.

Younes Houass, the first of the defendants to face scrutiny, insisted that he had never asked Valbuena for money to prevent the video from surfacing, and confirmed that he had calls and exchanged texts with the French midfielder. The president of the tribunal went on to lose patience with the defendant:

“Why did you intervene when you didn’t even know Mr Valbuena? To do him a favour? Do you not see that you are in a more than troubling affair? Stop making out like you are Mother Theresa.”

The second defendant to testify, Axel Angot, indicated that he was the one who had found the sextape, and that he believed it could be a way to pay off a €25,000 debt. RMC explain that Angot, a concierge with 200 players as clients, had discovered the video while repairing Valbuena’s mobile phone in 2014. Contrary to Houass, Angot accepts that an attempt of blackmail was made: he claims that he wanted to leak the video so that Valbuena would employ him for his IT skills to remove it and therefore get paid by Valbuena in this way. This was looked upon with great skepticism by the president of the tribunal.

A witness giving testimony then compared Angot and Mustapha Zouaoui to “Dastardly and Muttley, always troublemaking.”

With two out of five of the defendants have presented their version of events, the Tribunal’s president has been far from convinced, with their testimonies reportedly appearing as confused. Mathieu Valbuena later spoke to the press before the lunch break began:

“This case has been going on for six years. I notice that – nearly – everyone is here. Only Karim is missing. It’s a shame but that’s how it is. We’ve been waiting for six years. We’ll be here as long as it takes to put this behind me.”

Mustapha Zouaoui is next up to testify, he denies blackmailing Mathieu Valbuena: “I deny having blackmailed to receive the personal money of Valbuena!”

Zouaoui accuses Djibril Cissé, Anthony Fedon, an intermediary and Younes Houass, who was examined earlier in the day and denied blackmail. Cissé, who has already been exonerated by French justice on this affair, was characterised as having merely warned Valbuena of the existence of the video, the Olympiakos attacking midfielder confirmed this morning, as a friend.

Perhaps not the smartest initial move from Zouaoui, unless he is intentionally attempting to create havoc.

Zouaoui says he approached Valbuena so that the sextape: “would not come out. Otherwise it would hurt him… We do him a service (destroying it) and he thanks us. But we never wanted to blackmail him.”

Valbuena rebukes this: “To hear him say that he wanted to help me, that’s crazy.”

President of the Tribunal approaches Zouaoui testimony with the same skepticism that has characterised his approach to day – reminds Zouaoui that police officers who prepared the case “have you down as the lynchpin in the scheme.” Has some questions for Zouaoui on his business of customising luxury goods, which the president refers to as “a hidden business.”

Quite a bizarre hour or so, with Zouaoui trying to make people laugh and making reference to Valbuena’s size and mannerisms. Nobody, including the President of the Tribunal, has been laughing, as initially pointed out by L’Équipe.

Next up to testify is Real Madrid striker Karim Benzema, via his lawyer Maitre Vey. Mathieu Valbuena comes to the stand to give testimony against the Los Blancos forward.

Valbuena explained the events of 6th October when Karim Benzema approached him in Clairefontaine to discuss the sextape – the ex-Marseille man affirms that Benzema kept insisting that Valbuena speak to his “brother” “friend” Karim Zenati: “He insisted that I meet with someone, but he didn’t give me his name.” Valbuena then demarcated the difference between the Cissé situation and the Benzema situation. Cissé only made him aware of the video, never came up with a solution, but Benzema advised him to speak to his friend.

After the meeting, Valbuena says he realised that Benzema: “was part of the affair. I felt like he wanted to make me scared.”

Benzema’s lawyer, Maitre Vey, very on Valbuena’s case in the opening exchanges, questions the ex-French international on why he didn’t go to the police after this discussion.

Valbuena: “For me, it was to stay between us… [I wanted to] protect, protect Benzema, protect the French national team.”

Vey then questions the nature of Valbuena and Benzema’s relationship:

“Do you contest the fact that you got on well with Karim Benzema?”

Valbuena responds: “We were teammates. I had a normal relationship with him in the national team but outside of it we never saw each other.”

Vey adds: “Before seeing the investigators, did you have any information on what was going on?”

Valbuena: “The information that came out in L’Équipe were not a determining factor for me… I knew that when I left that room, I knew what to expect. But I was hoping for one thing, that our conversation would never be made public.”

Valbuena then asked if Benzema ever told him to pay him:

“He never spoke to me about money, I have always said that, but he was insistent. He did not want to help me, he said to me this is serious, the Euros are just around the corner…”

Valbuena on if he has any regrets on filing a legal complaint:

“I would never have filed if I knew that Benzema was part of this. For me, for the French national team… it hurt me. Without all that, I could have participated at EURO 2016.”

Things have moved on to Karim Zenati, Karim Benzema’s childhood friend, who he has known since he was 6 – Zenati says that Benzema: “is like a brother to me.”

During a period of time following Benzema signing for Real Madrid, Zenati was directly on Benzema’s payroll, earning €3,000 a month.

Zenati understands why he is being pursued for blackmail: “I spoke about the sex tape with Benzema following Zouaoui’s request.”

Zouaoui first made contact with Zenati and Benzema by approaching them together in a restaurant and offering to make Benzema a luxury cushion with his daughter’s initials on it.

A series of embarrassing wiretaps have been played out this afternoon to the court by the president of the tribunal including the following:

Benzema: “I said to Valbuena: if you want the video destroyed, go see my friend. No police, no lawyers. [Djibril] Cissé had the same thing (a sextape of him). He paid.”

Zenati then tries to combat: “If I would have had even a small doubt that there was blackmail, I would not have involved Benzema in this affair.”

The prosecutor then attempted somewhat of a low-blow: “That seems very naive for someone who has been involved in various things?”

Zenati fights back: “That has nothing to do with it. What is the link? I was convicted of armed robbery and drug trafficking!”

When pressed on the wiretaps, Zenati added: “No this phone call with Karim was just friends messing around. It was silly looking back on it but we did not cross a red line.”

Then the president of the tribunal follows up on a separate passage in the wiretaps:

Zenati responded: “That just meant that it would be his problem.”

Zenati’s lawyer then also attempts to provide an explanation: “F*** his grand-mother, that means – that he should go to hell – nothing to do with a threat. It is semantics but important.”

Zenati, who has taken the majority of the oncoming heat in today’s proceedings, tries to turn the narrative around back onto Mustapha Zouaoui:

“I was the 3rd individual put into play by a strategy that had been in place since the spring. I am naive.”

Zenati was then asked by the president of the tribunal if Benzema is annoyed that he was dragged into this affair: “No,” Zenati responds, but adds that he was sacked by Benzema after the events came to light and that he has not been allowed to be in contact with Benzema.

Valbuena has now been called back to the stand. Karim Benzema’s lawyer, Maitre Vey, wants further examination of the ex-Marseille man, asking about a detail on the wiretaps.

Zouaoui has also now returned to the stand. The President of the Tribunal asks him about Djibril Cissé’s sextape, which Zouaoui is alleged to have taken €15k from the ex-French international forward for so that it was not leaked.

Zouaoui responds: “That is not it. Cissé said to me that I often helped him out with things notably in this story about the video and therefore for remuneration of these services, he paid me this amount.”

The President of the tribunal seems to think that Zouaoui’s answer is “no but yes.” He then interrogates him on a separate blackmail that Zouaoui undertook which saw him arrested several years back and put in prison.

This matter related to watches in Switzerland, Cissé also gave testimony in that case, evidencing that he was not on good terms with Zouaoui.

Zouaoui adds a general comment: “Me I am calm at home, and each time I get called to provide services to get other people out of s***.”

As reported by Mathilde Lemaire, Zouaoui then goes on a general waffle that includes calling people “bitches.” His own lawyer looks exasperated.