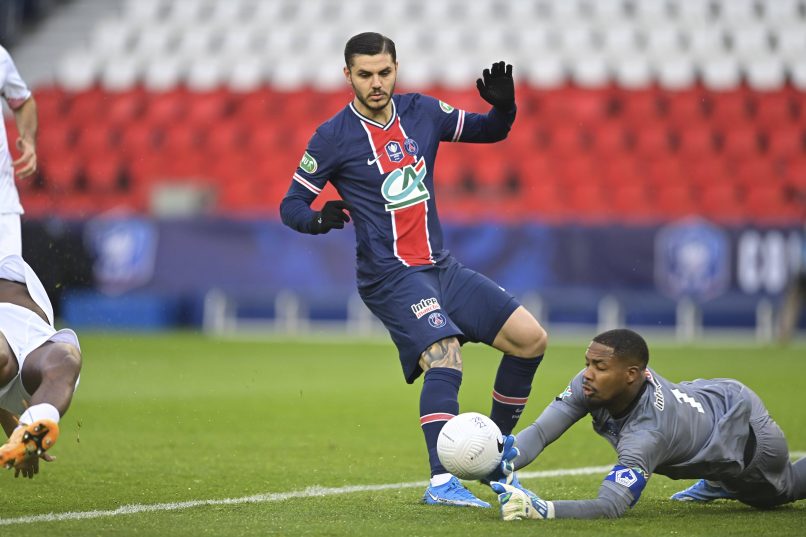 L’Équipe report that Argentine forward Mauro Icardi’s agents have begun conversations over a possible exit for the player out of PSG, just 12 months after signing for Les Parisiens permanently for approximately €50m after activating an option to buy him from Inter Milan.

Icardi will not feature for PSG vs Strasbourg on Saturday afternoon owing to a thigh injury picked up against Lille in the Coupe de France on 17th March. He was training with the 1st team squad on Friday but was not considered fit enough to be included. With 3 further days of training, he is likely to be in contention to play against Bayern Munich in the Champions’ League 2nd leg encounter.

This is Icardi’s fifth injury problem this season, having injured his thigh already at the start of the season, missing games with COVID-19, with a different illness, with adductor and knee problems at various stages of the 2020/21 campaign. The match on Saturday will be the 24th that he misses through injury in all competitions this season.

He has also been aptly challenged for the starting centre forward spot by Everton loanee Moise Kean all campaign, with Icardi producing just 6 assists and scoring 7 goals in 19 matches. Icardi did perform relatively well in both legs against FC Barcelona, but more in the defensive aspects of his game, and was critical in the Trophée des Champions victory over Marseille (2-1).

However, his statistics are not impressive enough for a €50m player. His agents are looking for an exit door – at 28, Icardi misses Serie A, where he maintains a good reputation. With a current salary of €10m a year pre-tax, there are not many sides who could afford him, with likely just Juventus and AS Roma looking for a striker. The Premier League could be an interesting option for the Argentine instead.

PSG’s board have met this desire with silence, indicating that they would likely be willing to see Icardi depart this summer. A deal will not be easy to complete, as Les Parisiens will be looking for at least the amount that Icardi cost them last summer, approximately €50m. If Icardi leaves, the club will have to find a successor – it could be Moise Kean, but there is no formal option to buy included in their loan agreement with Everton.

Arnaud Kalimuendo is having a fantastic season on loan with RC Lens, but Sporting Director Leonardo, who tends not to favour placing his trust in young prospects, is unlikely to be satisfied with that and the idea of including Paulo Dybala in a swap arrangement with Juventus is an interesting option for PSG.

A departure of Icardi for PSG would free up wages and support their financial efforts to retain Kylian Mbappé. One to watch.