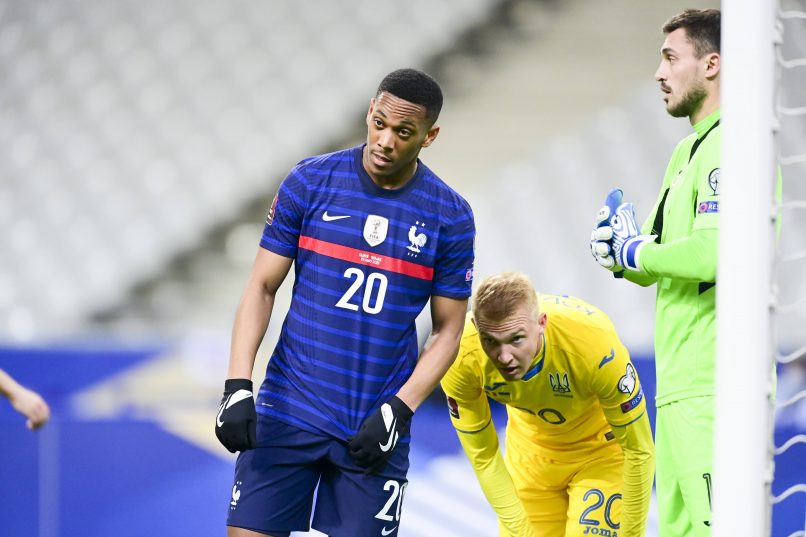 Speaking in an interview with Konbini, Manchester United and France international attacker Anthony Martial’s wife, Melanie Martial, discussed the stigma around being a professional footballer’s other half.

“Never in my life did I imagine that I would become the wife of a footballer. Really never. It was never my idea to live my life according to a man (‘s schedule), so already that’s all wrong. I can understand people who have stereotypes around footballers’ wives, because I had them too. It’s like: “Wow, the nice cars, handbags.” That’s the first stereotype, but it is not at all like that. It maybe summarises one month of the year, the month where they have holidays, in June, the nice holidays, all that. For the rest of the year it is not like that at all.”

“They stay in a hotel before each match every week, if there is 1 match a week that is great, if there are two well… Your husband, if he has an away game, you don’t see him. On top of that, you are sacrificing everything. Me, I am far away from my family, for example, I live abroad. Of course it is my choice, but it is also a sacrifice. Other thing, people think it is easy, but when your husband is in his top form, everyone is praising him, when there is even the smallest of problems, all you need is one person to start saying: “He’s not doing well,” he thinks he is like this, like that, as a general rule of thumb then everyone piles in and it is not easy. We are their family, we are around them, and it is difficult to watch a match with the commentary on. I cannot watch a football game with the sound on. He is your husband, you love him, you have feelings for this person. They, all they see is football. They are not necessarily paying attention to how they say things, they can hurt those around them.”

“So me, very sincerely, I have a husband who does not listen at all to what is said around him, whether that is comments, he does not look what people say. He will go home, re-watch his match, his actions, that’s it. To give you anecdotes, the majority of the time, when he comes home, and he sees my state, I am very down, he says: “What’s up with you?” As if something had happened to me and I say: “I can’t handle it, look at the comments.” He says to me: “We don’t care.” When he is not selected for the national team, you say to yourself: “Oh! I am going to spend more time with my husband, we can go on holiday.” But I am not able to think that way. When he is not somewhere (with the national team or playing), I am hurt for him, and generally, he’ll say to me: “It is not a big deal, maybe next time.” And we just try to take the positives, so it is good, we compliment each other in that sense. I help him, he helps me.”

“When he is injured, however. It is more of a drama for me. I don’t really know how to act, and so, I think I am annoying: “Are you ok?” “Are you ok?” “Are you sure that you are ok?” I always try to do things to see if he is going to smile at me, to see if he is ok. It is true that it is not easy. With COVID-19, I’d like to say to you that Anthony is often here. But it is true that that has not always been the case. For example, when I was about to give birth, it was not easy, because Anthony was on the plane (in 2018) when I was at the clinic. It is not easy because two days later people look at him and say to him: “Excuse me, you need to return to Los Angeles for three days, for a match.” But that is a 12 hour flight! So, Anthony said: “I would like to and I would do it no problem, except that my wife cannot walk and I need to look after my son.” And it is true that it was not easy because even though he talked that out a bit, after, he was slapped a little on the wrist. But at the same time who was going to look after my son? I couldn’t walk, I couldn’t change him, I couldn’t feed him. So, he stayed with me, even though it caused him problems.”

“I find it saddening that we put all women in the same boxes. I don’t like to hear things like: “Yeah, she is at home.” “They must have the latest handbag.” etc. I can accept that there are some that might be like that, no problem, but we don’t know! That is just the stereotype. Just because a wife isn’t out there telling people their lives doesn’t mean they do nothing. Someone who really supported me and who was right away there for me was Camille Schneiderlin, the wife of Morgan Schneiderlin. For the rest of my life I will be thankful to her, truly, because honestly there were people when they spoke badly of me to her, she defended me, it was crazy. Thankfully she was there, because otherwise, I would have closed myself off to everyone.”

“There are wives who are very dedicated, I have a friend who was in India with her partner Juan Mata, and rather than going there for holidays, they went to do humanitarian work. But all of that, we don’t know that, because they are not in the mode of we have to show things because they are not doing that to be able to show it. Another example, Tiziri Digne, she was studying, she is currently in Manchester with me. Now she has two children. She is in England, she can’t do what she studied for. Not because she doesn’t want to, not because she is weak, but because she cannot. They are not looked at equivalently, her studies in France are not recognised in England, so she cannot. Unless she leaves England for France, and again, not everyone can work abroad. It is true that I was known (in public) before going out with Anthony. In terms of what I do (influencer), I can work wherever I am, I can work all over the world. I can do it all. I am lucky because I am always busy. Initially, when I went out with Anthony, everyone said: “Girl from reality TV, with a footballer (eww).” Listen I do what I like, I do what I want to do and what I wanted to before (meeting Anthony). And I am with my husband. So in the end I think I am luckier than people who have degrees and cannot do what they want because they had to make these type of sacrifices and be with their husbands.”

“On top of that, people throw around labels like gold digger. People say: “You are a gold digger, you are using your husband’s credit card.” But you don’t know what the money comes from (that they spend), the how or the why. And I find that sad. I too have been called a gold digger, but that doesn’t bother me.”

“There will always be girls, exposed or not exposed, even the baker is seeing girls all day. My husband might attract the attentions of women, who are magnificent, who are younger than me. Yes, when you are with a footballer, you know that there are women circling. But I manage that quite well because I tell myself that I have been there for my husband, in moments where those people were not there, I know things, I manage things. Aside from that, every person will make their own decisions and in all cases, it is not because someone is world renowned and beautiful that she will be someone you can trust, someone that is best suited to you.”

“For me during the transfer windows I have not had much stress. I have never felt in the “moving” mode, big boxes, changing city, I have not yet had all that. All I would say, and this is only my view, but certainly I prefer the sun. But that is me, not Anthony. Anthony doesn’t care about the sun, he wants to play football, feel good in his shoes, feel good in the team.”

“Sorry, sorry, sorry my love. The clubs of my heart, for me, selfishly if I was only thinking about me, I would say Real Madrid. Hala Madrid. But for him, the club that he should go to, is the club where he feels good. That is all that I wish for him. Even if he wants to return to play in the 6th division with Ulis. I will be there as the first fan, no problem. What counts is where he wants to go and where he feels good.”