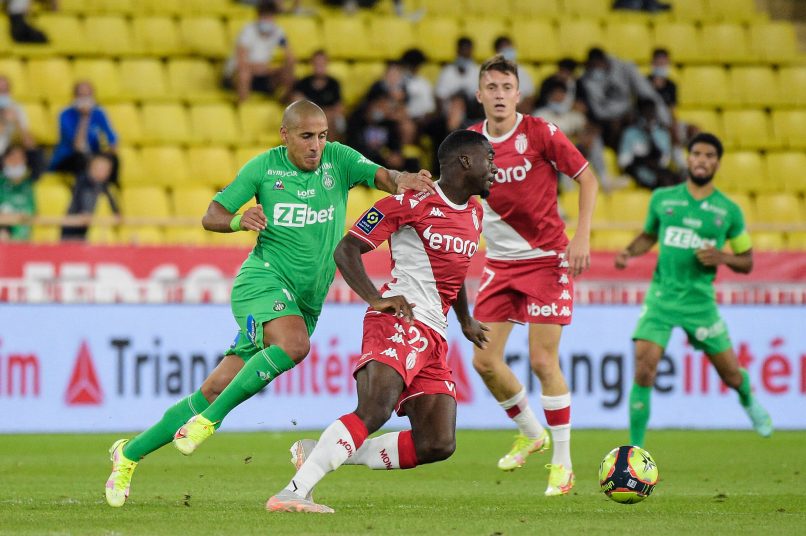 Djibril Sidibé, 4 – He may have been fortunate to stay on the pitch after a clumsy tackle on Khazri just before half time, when he was withdrawn for his protection.

Benoît Badiashile, 4 – Improved as the game wore on but was ponderous in the first half, lazily conceding possession to Krasso for a shock equaliser.

Youssouf Fofana, 7 – Although he was aided by Monaco’s man advantage, a series of barn-storming runs from midfield were perhaps the game’s highlight, one such charge resulted in an assist for Volland. He also hit the frame of the goal with a first half shot.

Krepin Diatta, 6 – Having looked overawed in his early Monaco career, Diatta has played with more hunger and confidence in recent games and it was his reverse ball that instigated the counter for Volland’s opener. Withdrawn as a concussion substitution after a clash of heads in the second half.

Myron Boadu, 4 – Very quiet overall but did beat Green to the ball to force the red card, one very poor touch wasted a clear chance to attack a fragmented ASSE back line. Still looks a little lost.

Kevin Volland, 7 – He perhaps could have offered more of a consistent goal threat given Monaco’s man advantage but his rasping near post shot put Monaco ahead and it was his lovely looping cross that allowed Ben Yedder to seal the win with Monaco’s third.

Etienne Green, 3 – Although he was sold short by Kolodziejczak, the rush off his line to confront Boadu, eventually badly fouling the forward, was rash and unneeded and was deservedly send off.

Timothée Kolodziejczak, 1 – Far too slow in combating Volland’s opener who easily drifted past the defender before he neglected to take note of Boadu who ambushed him and forced Green’s rash tackle which resulted in his sending off after Diop’s bouncing through ball. His unfathomable handball, when under no pressure at all from a Monaco cross, resulted in a clear penalty. Nearly gifted Ben Yedder another goal with a loose back pass too. Awful.

Wahbi Khazri, 6 – His cross hit the post early on and, despite the man’s disadvantage, he proved a usefu,l if fleeting, creative influence, especially in the first hour.

Denis Bouanga, 7– Produced a clever finish with the outside of his foot to equalise and was unlucky not to add to his tally, hitting the post twice from the edge of the area. Despite minimal service with ASSE a man light, he caused issues with some direct play.

Jean Krasso, 6 – Held his own on a rare start for Les Verts and it was he who robbed Badiashile on the touchline to cross for Bouanga to equalise.