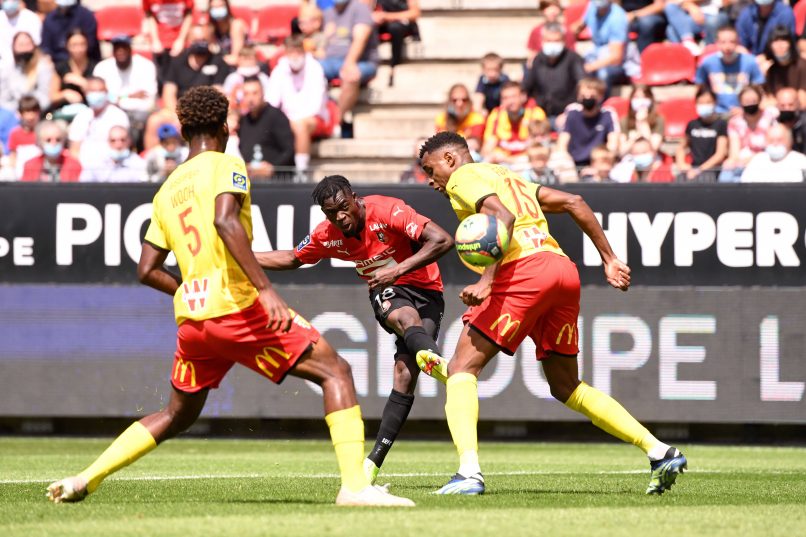 Alfred Gomis, 6 – Faced zero shots on target from PSG but commanded his area expertly and did well to block a first half Di Maria cross which would have resulted in the opener.

Hamari Traoré, 7 – No worries with Neymar, defended unusually astutely on the whole and posted a typically athletic display.

Warmed Omari, 6 – He was lucky to get away with a poor touch which should have resulted in a goal after his clearance deflected into Neymar’s path but the youngster posted an impressively assured performance for such an experienced defender.

Nayef Aguerd, 7 – Marshalled Rennes’ defence expertly throughout and did well to apply pressure to put Mbappé off when the Frenchman was presented with PSG’s best second half chance.

Kamaldeen Sulemana, 8 – Sulemana has had an erratic start in Ligue 1 but his one-on-one skills, direct dribbling style and technical ability make the Ghanaian a thrilling prospect and that talent unbalanced PSG throughout. It was his cross that assisted the opener while his crossing, pace and fearless style were a constant worry for PSG.

Gaëtan Laborde, 8 – Enjoyed very little service overall but maximised his chances, nipping in at the back post to volley the opener and it was his clever cutback that set up Tait’s second.

Gianluigi Donnarumma, 4 – Not to blame for either goal but looked a little flappy when pressured while his passing was far from precise. He was lucky to get away with a misjudged dive at a first half cross, deflecting the ball up in the air in the six yard area.

Achraf Hakimi, 3 – Worries over his defensive ability in a four man back line were exposed and looked like a winger playing at full-back, positionally poor and notably didn’t do enough to stop Sulemana’s cross for 1-0. Unusually, he offered relatively little going forward.

Neymar, 2 – On the fringes in general and failed to affect the game positively. Often dribbled down a hole and lost the ball, his passing radar was out of tune and somehow sliced over from six yards when uncontested at 0-0.

Lionel Messi, 6 – Faded in the second half but ran the first period with his precise passing, interplay and progression of the ball. Hit the bar with a free-kick.