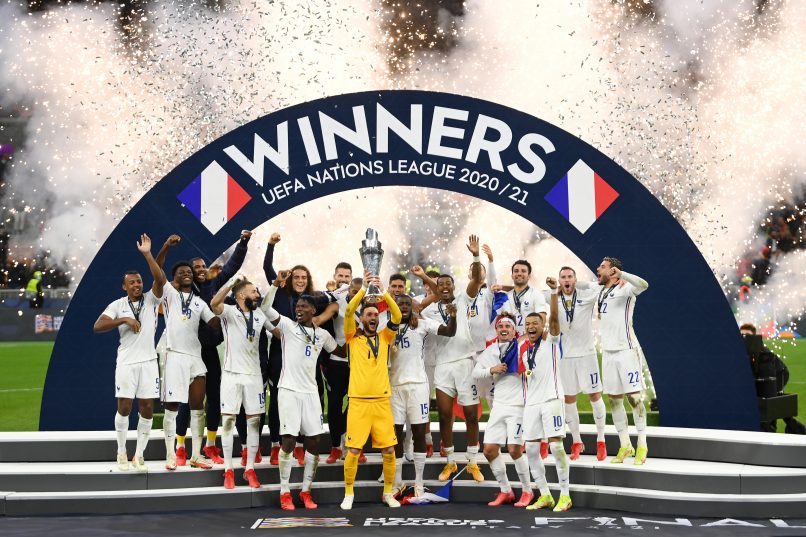 Hugo Lloris 7 – Faced very few shots until the last moments of the game so generally had more to do with his feet than his hands. The two exceptions were both crucial close-range instinctive stops to stop Spain from equalising. Otherwise gave possession away on a number of occasions with stray long range passes that found their way into touch.

Jules Koundé 6 – Performed well generally with a more composed game than against Belgium. A couple of clumsy tackles earned him a yellow card but the number of well-timed tackles outweigh these.

Raphaël Varane 5 – No mistakes of note in his 45-minute appearance cut short by injury but struggled to deal with Oyarzabal at times.

Presnel Kimpembe 5 – Satisfactory performance with a small number of impressive slide tackles. Aerial presence important in the last minutes of the game too.

Paul Pogba 6 – Typically confident on the ball, spraying passes forward from midfield and taking the ball coolly round Spanish midfielders. It was his pass that set up Benzema’s opportunity in the early moments of the game.

Aurélien Tchouaméni 7 – Took advantage of his opportunity with Rabiot out with COVID. Worked incredibly hard, as expected in the place of Kanté and regained possession on a number of occasions with one perfectly timed tackle in his own box proving particularly impressive. Also looked as comfortable as Pogba on the ball, setting off a dangerous counter attack that ended in Hernandez hitting the bar.

Théo Hernandez 6 – Should have scored from close range just before Spain did. But compensated for the wasted opportunity with a delightful through ball to Mbappe which led to his goal.

Antoine Griezmann 5 – Much like the game against Belgium, he did not find himself significantly involved in important attacks but worked hard to lead the high press. Few chances so few mistakes.

Karim Benzema 8 – Had a very quiet game in general but turned up when needed to place the ball beautifully in the corner of the goal from long range in quick response to Spain’s go-ahead goal. Also, importantly wasted a 1-on-1 opportunity early in the first half, which may have been ruled out for offside regardless.

Kylian Mbappé 7 – Not unlike Benzema with minimal involvement in the game and a number of wasted opportunities until his goal, which was expertly dispatched in the most assured of fashions. As always threatened with pace but rarely able to create dangerous opportunities with it.

Dayot Upamecano 3 – Struggled to deal with Oyarzabal on a number of occasions, including in the build-up to the Spanish goal.

Léo Dubois 6 – A short appearance for the substitute marked by an impressive forward run successfully beating a number of Spanish defenders.