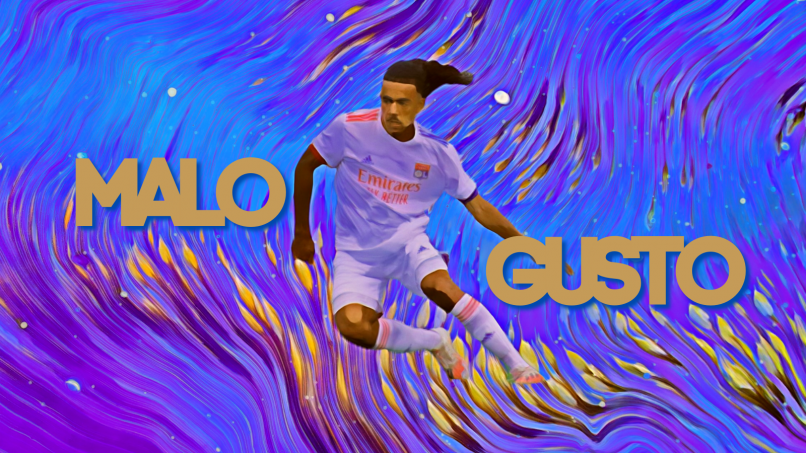 This summer, Lyon made a mistake. The sale of highly regarded 20-year-old academy graduate left-back Melvin Bard for just €3m to OGC Nice made little sense. Having impressed when given minutes under Rudi Garcia last season and minimal options ahead of him, this was expected to be Bard’s year. However, as Bard grows in stature as part of an impressive Nice side, who look likely to finish above Lyon this season, OL have been gifted yet another full-back from their prolific academy. With just a handful of senior appearances so far, Malo Gusto is just 18 but he may soon become the solution to Didier Deschamps’ right-back conundrum.

Now a flying full-back by trade, Gusto started out as an attacking midfielder but was, by chance, converted to right-back in his earlier teens. “At the start it was to compensate for injuries in the age category above,” Gusto told Lyon’s website. “The coach put me in at right-back and I had a good match, since then my position hasn’t changed.” However, as Gusto admits, it wasn’t what he wanted. “At the beginning it was complicated for me, and for my father too. He has always seen me on the offensive side and he now saw me staying back,” Gusto explained. “But it’s still football, if you study the role well, you’ll progress quickly.”

As a fairly recently converted right-back, Gusto lacks the slightly angular, functional technique of a lot of career full-backs and instead plays with the swagger and forward thinking verve of an attacking midfielder. Rather than the waspish persistence of a modern right-back who may look to overlap, exchange passes in-field or head to the bye-line and cross, while Gusto does those things too, the 18-year-old is all shimmies and drops of the shoulder. Being taller than the archetypal full-back at 5’9 (Jordi Alba, for example, is 5’6) and broader too, Gusto carries an understated physicality, and still has a way to mature. However, his scraggly pony-tail and goatee beard already make Gusto look far older than 18.

That imposing figure – Gusto’s Twitter profile picture features him lifting large weights – older looking features and a supreme confidence in possession gives Gusto a sense of maturity, that he’s been around for some time. Despite only making six outings for Lyon’s senior side so far, Gusto is remarkably assured. Although early on against Strasbourg earlier this month he made a couple of mistakes in possession, Gusto rapidly grew into the game and was, behind lynchpin Bruno Guimarães, OL’s standout performer that evening in a 3-1 win. Gusto’s own description of his style as an “offensive, hard-hitting, powerful, fast, technical player” was again proven correct.

Despite his attacking roots, Gusto has adapted well to the defensive side of the game and is similarly pro-active around his own penalty area as when marauding forward. He’s not afraid to make a lunging intervention or impose himself on the opposition – as competing with Strasbourg’s bulky centre-back Alexander Djiku from corners showed. That tackle first, ask questions later style of defending relies heavily on timing and, as one barely passable last ditch challenge on Strasbourg striker Kevin Gameiro underlined, it could soon get Gusto in trouble. A deceptive turn of pace and a burgeoning ability to read play, however, will help but the player concedes: “I know I still have to work on my defensive positioning.”

Although France international full-back Léo Dubois remains Lyon’s first choice, Gusto’s impressive pre-season covering for the holidaying Dubois following EURO 2020 and an assured start this term with the senior man out injured, he has garnered incoming Lyon coach Peter Bosz’s trust. As an already more than able understudy, he’ll likely be afforded significant game time this term with Ligue 1 and Europa League commitments needing to be balanced as OL are expected to make a significant impact in both.

“I like Malo, he played well,” said an enthused Bosz earlier this month. “He’s very young but he has a lot of talent. He must continue to learn, that’s what we’re here for. It’s normal that, at his age, he plays well sometimes and other times a little less well. He will only become more consistent, lose the ball less and make fewer mistakes. At 18 he doesn’t have as much experience as Léo. That’s not a problem. For me the most important thing is talent – and he has it.”

Having joined Lyon’s prolific academy from amateur club Bourgoin Jallieu in 2016, Gusto has long been highly regarded at OL. “I recall that he was with the under 19s last season,” said then OL coach Rudi Garcia last October. “We could see his potential, but it was much too early for him to reach the required level. He is still very young but if he confirms what we think of him, he can become a very good professional player in the future.”

Thanks to a responsible, considered attitude, as “a player who listens and is very pleasant” according to Garcia, Gusto is aware that he still has a long way to progress. “I’m trying to perform as well as possible,” he told OL TV. “I try to be as focused as possible, and to be consistent with what the coach has asked of us. I try to do my best.”

After the bizarre departure of Bard, Lyon have the chance to make up for their mistake. The 18-year-old’s talent and sky-high potential are obvious but he needs Lyon, unlike with Bard, to be generous with their trust and time. A recent contract extension to 2024 suggests that is the club’s plan.

Gusto’s physique, attacking verve, all-action defending and focused attitude, as well as the fact that all those attributes have a long way to develop, make the teenager a rare talent. With France’s right-back area a problem position, and 27-year-old Dubois able to fetch more than the €10m OL paid Nantes for his services three years ago, should the club be interested in selling, perhaps both club and country have an able, possibly superior, replacement waiting to step in. Lyon have the chance to make up for their mistake with Bard and Didier Deschamps will be hoping Peter Bosz and co don’t miss their opportunity.