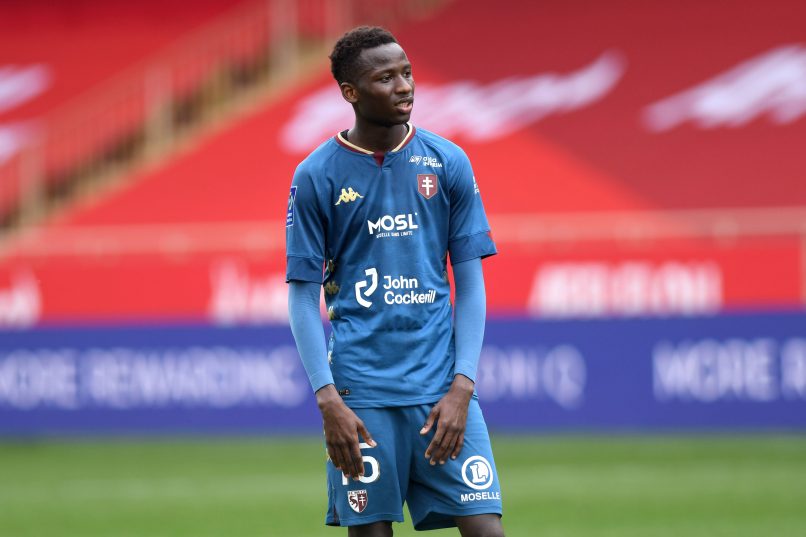 While they are far from alone in this respect, fans of FC Metz can justifiably feel frustrated thinking of the players they could currently be supporting in the stands each week. Had Les Grenats the clout to retain all those who passed through their team as youngsters, they could be fielding an XI featuring Kalidou Koulibaly and Moussa Niakhaté in defence, Miralem Pjanic controlling the midfield, Ismaila Sarr with the right-wing trickery and Sadio Mané laying on the goals for Habib Diallo (a line-up which could have gone head-to-head with a previous theoretical XI featuring a front line of Ribéry-Saha-Cissé-Adebayor-Pirès).

Unfortunately a mix of factors including the restrictions imposed by the DNCG, the status of Ligue 1 – an inability to compete financially with their neighbours across the Channel, Alps and Pyrenees – and Metz’s yo-yoing between the top two divisions over the past 20 years, have meant that these young talents have left Lorraine painfully early. The latest unpolished gem whom fans fear will soon be shining elsewhere is midfielder Pape Matar Sarr.

Having joined Metz through the club’s successful partnership with the Generation Foot academy in Senegal, 18-year-old Sarr has had a breakthrough season under coach Frederic Antonetti’s guidance and is already attracting interest from across Europe.

Born in September 2002 into a family with a football heritage (his dad was an international goalkeeper and his uncle is a leading coach), becoming a professional was always Pape’s priority and a factor in his dropping out of school early – before returning as a condition of joining Generation Foot aged 13. By then he had already shown the talent to attract interest from a major European club, his first coach Mamadou Saer Barry claiming that Manchester City had made enquiries when he was just 9.

A series of starring roles in junior international tournaments increased interest. After Senegal were knocked out of 2019 U17 African Cup of Nations by Guinea (who were later disqualified for fielding overage players), the lion-cubs of Teranga moved on to the same year’s U17 World Cup. Senegal fell to Spain in the Round of 16 but Sarr impressed in the group stage, the then-16-year-old assisting two and scoring three from midfield, including a superb free kick against the United States.

Senegal moved straight on to the Zone A U20 Union of West African Nations tournament. A hat-trick against Sierra Leone helped the lion-cubs to the final against Mali, where Sarr scored one and forced an own goal for a tournament-winning 2-0 win. 2020 saw Senegal compete in the Arab Cup in Saudi Arabia, Sarr setting the team on the way to another trophy with four more goals, including another unstoppable free kick in the semi-final victory over Egypt.

Barcelona, Atletico and Monaco were now making enquiries for the 17-year-old starlet but Metz took up their first option to bring Sarr over to north-east France in the summer.

Sarr began the 2020/21 campaign with the reserves but Antonetti, on his return to the bench, immediately brought Sarr into the first team squad and he made his debut as a substitute in a late November defeat to Brest. Sarr has remained in the first team squad ever since, making 15 league starts in 2021 to date and scoring three goals.

Although Eduardo Camavinga has been the focus of a lot more hype, Sarr is not unlike the France international in that his wide-ranging skill set means that he can play anywhere in the midfield. Mainly used thus far either in a more defensive role or as the box-to-box piston, he has shown his proficiency in reading the game, winning back possession with a well-timed tackle or interception and then using his ability on the ball to break lines. Either with his range of passing or taking the ball forward himself, and playing a central role in the fast transitions and counter-attacking that have been Metz’s hallmarks this season. While his defensive statistics are commendable (in Metz’s top five for tackles per match, per Who Scored), other statistics back up the feeling that Sarr’s future is either as a line-breaker or attacking midfielder.

As Sarr notes “in Senegal I played mainly as a no.8. Here I’ve been mostly playing as a no.6 but I am comfortable in either position.” Sarr ranks 5th for number of passes per match and 3rd for pass completion – all the more impressive since he also ranks 3rd for long balls per match. Although he has no assists to his name and is only 6th in terms of key passes, those figures would be certain to improve if he was given the opportunity in the more attacking midfield role. As his youth international exploits suggest, he also likes a shot from distance and while they can sometimes be wild, it is clearly another area in which he looks to have real potential, two of his three goals coming from outside the area (the third a brilliantly controlled but powerful volley last weekend in a great individual performance against Dijon). Tall and elegant, Sarr could build up his body strength but has the potential to be a danger at set-pieces, whether taking them himself or using his height and already impressive aerial ability.

Unsurprisingly for one so young, Sarr can look raw at times and all areas still need work. His concentration can waiver and he often seems to tire as matches progress. As Antonetti observes “he needs to improve in all domains – technique, tactics and consistency,” but under Metz’s coach, Sarr is in great hands: speaking ahead of the recent match against PSG, Antonetti noted “this morning I spent 30 minutes on a video session with him – I’m looking to use my experience in order to help him progress.” Although Metz went on to lose that match, Sarr was one of their bright sparks and came close to giving Les Grenats a second-half lead, his half-volley well saved by Keylor Navas. A fortnight earlier he had controlled large periods of the match against Lille and was unfortunate to see a long-range snap-shot come off the post.

His break-out form this season has already earned him full international recognition. In March he made his Senegal debut against Congo. In a drab 0-0, he lit up the first half with an all-action display, including a defence-splitting pass which put Mane through on goal, only for the ex-Messin to hit the bar. PSG and Senegal midfielder Idrissa Gueye was impressed: “he’s my type of player – I admire him a lot – loads of talent – he’s the future of Senegal.”

The big question for Grenat fans though is whether he is the future of Metz. Sarr and his team-mates have exceeded expectations in helping the club to stay in Ligue 1 with comfort. Several players have put themselves in various shop windows and Sarr has already shown enough talent this season for Manchester United, Chelsea, Everton, Lyon and Nice to join the list of suitors. Antonetti has certainly made noises about wanting to retain all of his squad and is in no doubt that Metz is the best place for Sarr for now: “leave him alone, let him grow in peace. The first three months here he cried every day, he struggled to adapt. Like anyone else who had just left his parents – he’s just a kid. It’s no different just because he’s a footballer. We’re trying to protect him as well as possible.”

Sarr himself acknowledges that it took him a little time to adapt: “I discovered a new climate here. It was so cold at first that I couldn’t even put my boots on. Even after training my feet were so frozen that I had to wait 15 minutes to warm up before I could remove my boots.” He credits Antonetti for his progress (“he was a bit hard with me and pushed me, but it was for my own good and really helped”) and has gone up a level since a homesickness-curing visit to Senegal in December (a chance to give his dad the shirt he wore on his full debut against Lyon).

While Sarr has made no suggestion that he wants to move, Metz president Bernard Serin last week scared all Metz fans by noting “we will be attacked – we have lots of players on the radar of lots of clubs which are bigger than us, in France and abroad. We’re not necessarily looking to sell but when a player is approached by a very big club, with a very big salary and a big signing-on fee, then it’s very hard to stand in the player’s way. That’s the reality.”

Metz fans have experienced a little too much of that reality in recent years and see Sarr remaining for at least one more season as being best for the growth of the player as well as the club. Unfortunately, with the big boys circling, the return of those fans to Saint-Symphorien for the last match of the season against Marseille may sadly be their chance to see Sarr in the Metz shirt for the first and last time.