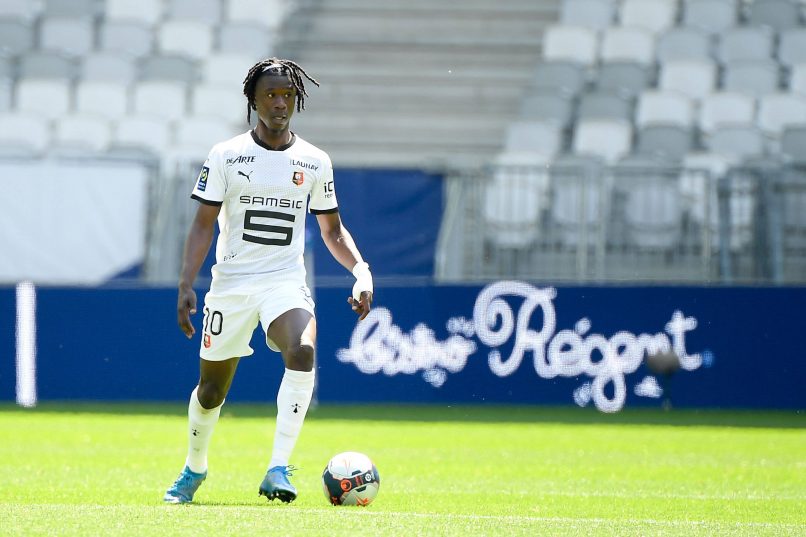 L’Équipe report that PSG Sporting Director Leonardo used the occasion of the Ligue 1 clash with Rennes on Sunday night to speak with the opposition’s board about the possibility of signing 18-year-old French international midfielder Eduardo Camavinga this summer.

Under contract with SRFC until June 2022 and recently having signed up with Stellar Sports agency, Camavinga, per the media outlet, has rejected a contract extension offer and is currently of a mind to move on from the Brittany side as quickly as possible.

Rennes had set an €80m price last summer, but with just 12 months remaining on the talent’s current deal, a €30m plus bonuses fee seems more realistic, given the current tricky economic context.

It is in the interest of Stellar for the transfer fee to be as low as possible in this instance so that they can negotiate as big a signing on fee for Camavinga’s future club as can be extracted.

Bayern Munich have already registered their interest but don’t want to pay more than €25m. SRFC manager Bruno Genesio is keen on convincing the teenager to stay and still hasn’t given up on that – he can point to the example of having done the same for Corentin Tolisso whilst he was managing Lyon. Tolisso had an offer from Napoli in 2016, he wanted to take it, Genesio convinced him to stay, 12 months later he joined Bayern Munich for €41.5m.

Stellar hope to place Camavinga in one of the four or five top European clubs, per sources close to the agency. PSG would count in that category, Real Madrid continue to monitor the situation.