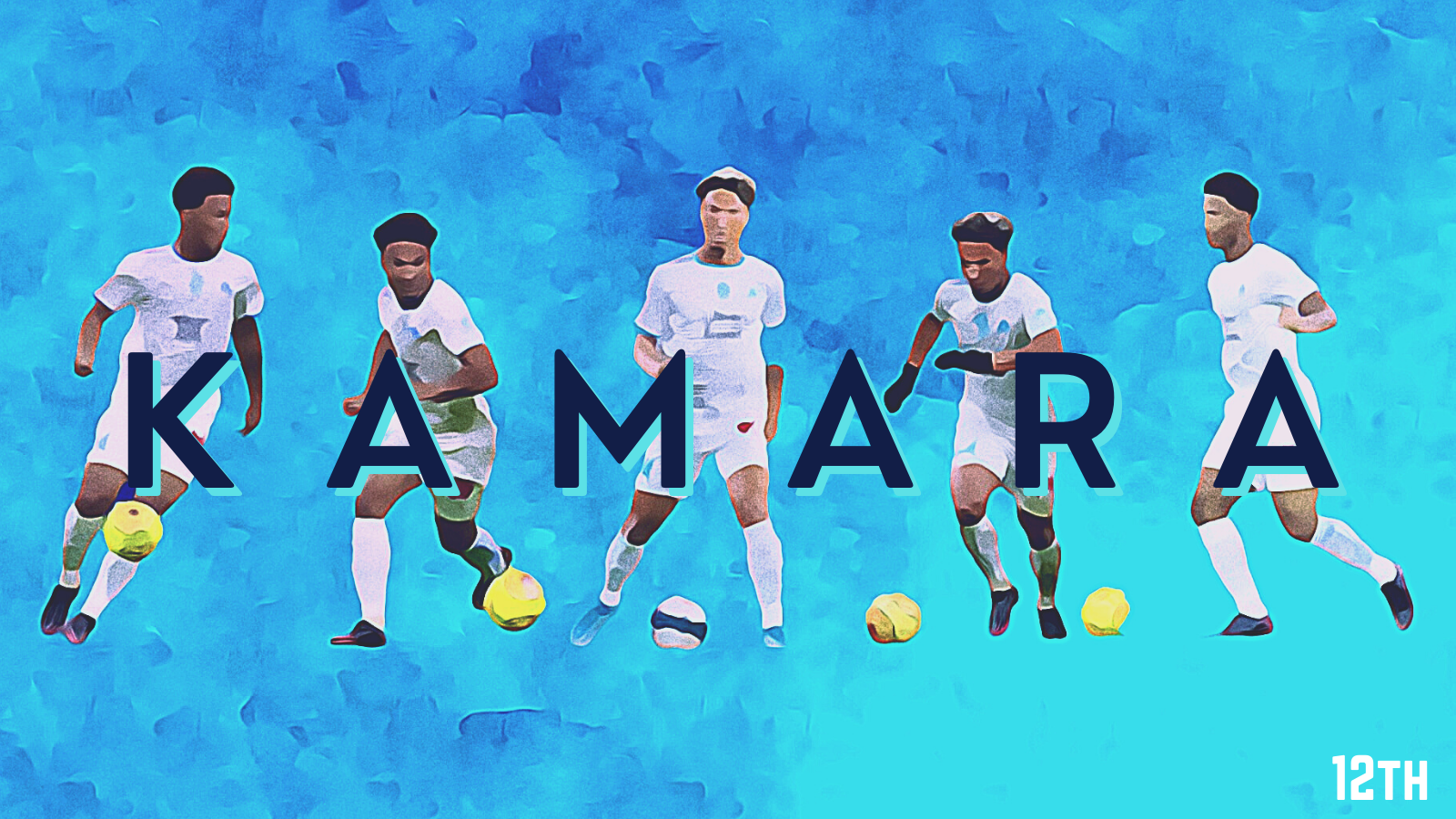 This feature is the latest in our series looking at the top 20 hottest properties in Ligue 1; those players to keep an eye on this season and who are most likely to feature heavily in the 2022 summer transfer window. Look out for 11th place tomorrow and follow the run down in full here on GFFN.

Boubacar Kamara elicits considerable pride in Marseille. As one of the few youth players to imbed himself, for several seasons now, in the first team, the Marseille-born Kamara is the pride and joy of a proud city. Kamara has bucked the trend – Maxime Lopez, now of Serie A club Sassuolo, aside – where many of the youth players churned out by OM’s much-maligned academy have failed.

The young central defender turned defensive midfielder has gone from strength to strength in each of his senior seasons in Provence. Now, at 21-years-old, he has been at the heart of Marseille’s team through highs and, sometimes painful, lows – a relatively common experience for a player during a long stay at the Velodrome. Nevertheless, Kamara has developed into a versatile player, showing confidence on the ball as the engine that kicks off attacks as OM play out from the back. The young Frenchman is a calm operator in a dynamic system under Jorge Sampaoli, where defensive stability often goes out of the window amid Sampaoli’s characteristic organised chaos.

Over the course of his Marseille career, after making his debut at right-back having just turned 17 in 2016’s Coupe de la Ligue tie at Sochaux, Kamara has shone in three very different systems under three very different managers. As the chaotic Louis-Dreyfus era came to a conclusion back in 2016, incoming coach Rudi Garcia made it his goal to promote a handful of young players. Kamara became one of the earliest beneficiaries of a targeted investment into first team pathways for those developed at the centre de formation, joining fellow graduate Lopez in the senior squad.

In truth, Kamara would’ve made it anyway. Revered for some time by those at the club, Kamara was long a key figure in the youth ranks, having captained several age groups since his first foray into the Marseille academy aged just five back in 2005. Much had been made of the emergence of a lanky, powerful central defender with an eye for a cutting pass and was beginning to excite an OM fanbase that had precious little to cheer during the 2016/17 campaign.

Having initially started out in his favoured centre-back position under Garcia, it was André Villas-Boas who moved the player further up field as he sought to underpin a stoic style of no-frills, just results football. Being perhaps one of the better passers in the team, it was felt that the Marseille-born youngster was more useful in front of the defence than amongst the centre-backs.

Such versatility, and a consistent ability to perform in more than one key position, has gained Kamara many admirers, not least in Manchester where City have long been credited with interest. However, Kamara is keen to avoid being labelled a ‘jack-of-all-trades but a master of none’ figure. In 2019, Kamara explained: “I’m a central defender. It’s my usual position. That’s where I want to settle down. After that, if I have to help the team when there are injuries or suspensions [so be it]. It’s the coach who makes the choices.” While he clearly feels his best football is played at the back, – Villas-Boas even mused that Kamara the midfielder was “temporary… I also look at him when he plays as a central defender, he has a great future in that position” – Kamara has now spent more than a year in a different role.

It’s that versatility which cost him a place in the France under 21 squad for their European Championship campaign last season, not being as combative as specialists such as Monaco’s Aurélien Tchouaméni and Eduardo Camavinga, now of Real Madrid, in midfield, while not being as experienced at the back as Leicester City’s Wesley Fofana or Kamara’s Marseille team mate William Saliba. It remains to be seen how Kamara can carve out an identity in an otherwise crowded field of competitors.

Nevertheless, Kamara continues to shine at Marseille under Jorge Sampaoli. In tandem with a host of midfield partners, including Mattéo Guendouzi and Pape Gueye, Kamara leads a solid but technical group in the middle of the park at Stade Velodrome, boasting assured defensive tenacity, a solid passing mechanism and excellent collective reading of the game. They’ve enabled OM to settle in during the early stages of the 2021/22 season. Marseille have grown into a solid defensive unit which now seems to churn out clean sheet after clean sheet despite Sampaoli’s gung-ho-looking set-up.

Having been handed the captain’s armband at Marseille but with just one year of his contract to run, Kamara’s fledgling career remains at a crossroads. Wolves and Newcastle tried their luck with late bids at the end of the transfer window, but were unsuccessful. However, many in Marseille believe that their pepite could do a lot better than such Premier League upstarts, although Newcastle’s recent takeover may change the perspectives of all involved.

The elegance and composure with which Kamara plays has become a major selling point in converting the 21-year-old into, in theory, Marseille’s biggest bankable talent. L’Equipe reported OM had offered a two year contract extension beyond next summer in an attempt to eventually generate a transfer fee for the player. However, Kamara was reportedly upset over the club’s persistence in trying to move him on during the window and, as it stands, will leave on a free at the end of the season.

For now, top-level interest remains on ice, however, as a pivotal season develops for the 21-year-old. The Premier League surely beckons, but it’ll depend on the player as to where he lands as he negotiates an important campaign with his hometown club.

Despite his, and others, best laid plans, the pride of Marseille is indeed becoming something of a jack of all trades but Kamara himself only wants to be a master of one as a powerful, elegant centre-back. Given his displays at the base of midfield, however, he might not get his way any time soon.