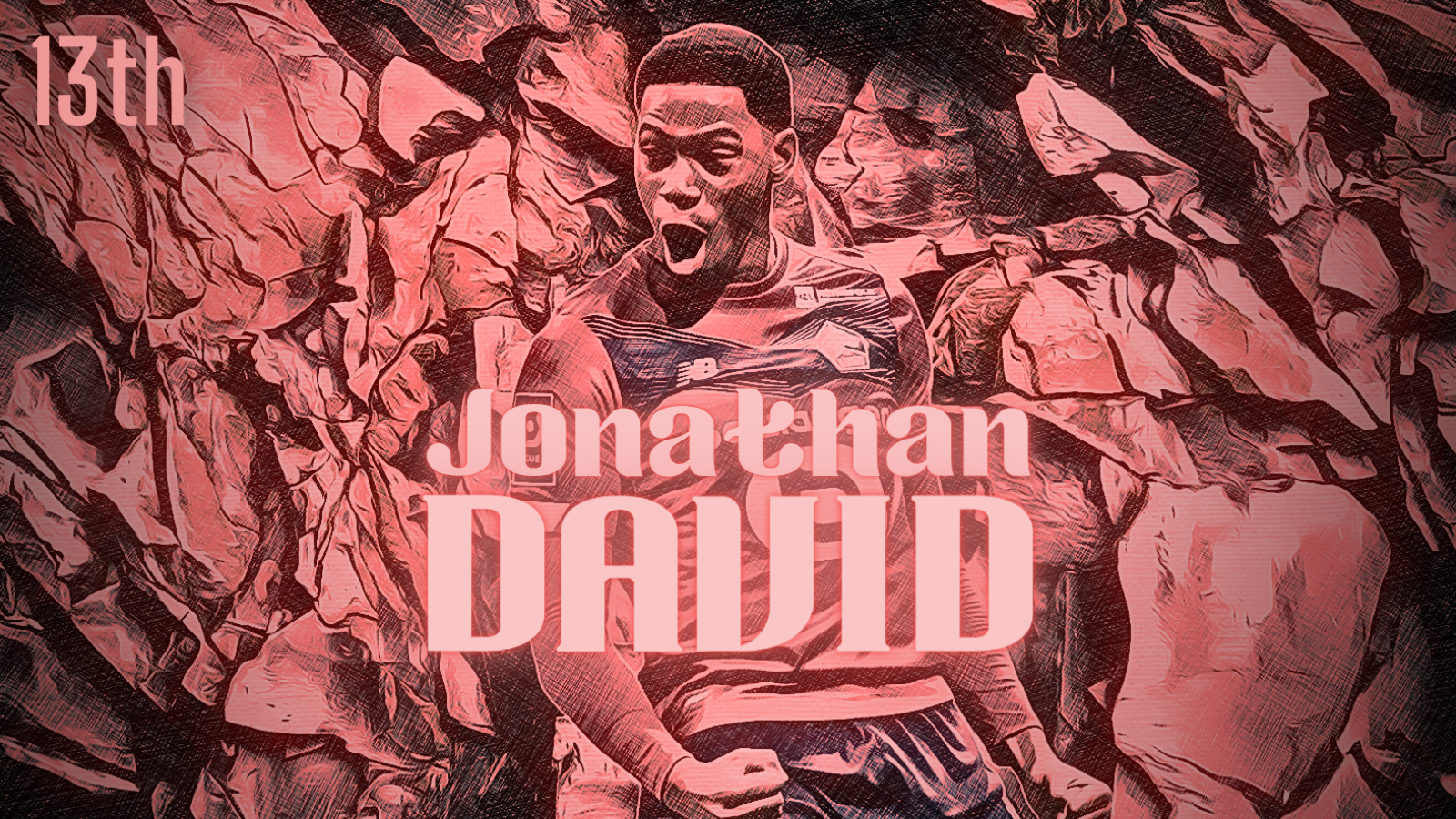 This feature is the latest in our series looking at the top 20 hottest properties in Ligue 1; those players to keep an eye on this season and who are most likely to feature heavily in the 2022 summer transfer window. Look out for number 12 tomorrow and follow the run down in full here on GFFN.

Problem solving is what Jonathan David does best. Born in Brooklyn, New York, David’s parents moved to Ottawa in Canada, via Haiti, when he was six before he eventually graduated as a footballer with Belgium club Gent, having joined in 2017. Scoring four in his first four senior games, David grew up fast in Belgium. “When I moved here I had to become a man because I was living on my own,” David told the Guardian last year. “I know my family is only one phone call away but I have to find solutions to problems for myself.” 83 games for Gent brought 37 goals, 15 assists and interest from abroad and David eventually joined Lille. However, after a glacial start to his Ligue 1 career, finding solutions to problems has again become a skill.

Ten appearances and 558 minutes into his French career, after moving to norther France in August 2020, the now 21-year-old David was without a goal or an assist. Although Lille won nine of those games, David’s form had seen him move from a starter to an intermittent presence in a title chasing side. November’s 4-0 win over Lorient finally brought a goal, following his first assist – a delightful reverse ball for Yusuf Yazici – earlier that month at AC Milan in the Europa League.

Although his movement, speed and bourgeoning interplay often hinted at quality, the Canadian striker’s one-dimensional finishing produced just two goals across his first 25 games for Les Dogues. In 2021, however, David was transformed. His final tally of 13 Ligue 1 goals, which included winners away at PSG and late against Marseille, plus the crucial opener on the final day at Angers, were crucial to Lille’s title triumph. Only Gaëtan Laborde had more than his six goals in the first ten Ligue 1 match days this season, while, at the time of writing, just Erling Haaland, Kylian Mbappé and Dusan Vlahovic have more league goals in 2021 of players under 25 across Europe’s ‘Big 5’ leagues.

Slowly becoming increasingly settled at Stade Pierre-Mauroy has been key to David’s sedate but constant upward trajectory since moving to northern France. “Anywhere you go in the beginning is always difficult,” David explained, recalling his move to Canada. Initially nervy and unable to impact games, his finishing often snappy, 2021’s David is instead full of swagger, especially in his interplay with partner Burak Yilmaz and others, and an intelligent and innovative use of possession. His finishing, although still far from perfect, is much more considered too.

That burgeoning confidence brought Lille dynamism and energy to complement the veteran Yilmaz’s unique brand of power and persistence. Over the last year, 19.52 pressures per 90 minutes places David in the top 8% of forwards across the top five leagues in that regard, while 0.57 interceptions per 90 minutes has David comfortably inside the top fifth of his peers. With Yilmaz turning 37 at the end of the season, the young Canadian takes much responsibility for pressing high when needed and is one of few Lille players to have maintained their intensity after Jocelyn Gourvennec replaced title winning coach Christophe Galtier.

With his contract running to 2025, the substantial €27m transfer fee Lille paid Gent last year is an issue for potential suitors. With Lille keen to make a profit, it’s likely successful bids would need to threaten €40m at least, meaning David’s list of destinations is, as it stands, short. However, his continued development and an eye-catching goal return could convince foreign clubs, especially upper mid-table Premier League sides, that he is worth the risk. His poor record and oddly inflated fee notwithstanding, Lille may be hoping Nicolas Pépé’s €70m move to Arsenal could be a blueprint.

Despite his obvious ability, David’s best position might give clubs pause. Regardless of his strength, a lack of height (5’9) and a keenness to work in tandem with those around him by dropping off as a second striker, makes the Canadian international less suited to a lone forward role at this level while he’s proven notably less effective when used wide. Without the one-on-one skills of top level wingers, elements of David’s game could instead be compared to Wissam Ben Yedder or perhaps even Luis Suárez. Parallels can be drawn between Ben Yedder’s futsal experience and a teenage David playing in freezing Ottawa’s cramped indoor ‘domes’ as both boast sharp control and protect the ball well with their bodies.

Despite his clever interplay in tight spaces, perhaps also thanks to Ottawa’s crowded domes, David’s passing is rarely expansive, incisive or progressive enough to break lines, underlined by a miserly five assists across his first 62 LOSC outings. Although eight assists in 27 league games during his final season with Gent suggests otherwise, his creative abilities are not to be relied upon at this stage. It’s clear Lille’s 4-4-2 fits his game neatly, but it’s a system few others could offer.

Although links to England’s traditional top six are premature, Liverpool’s reported interest does make some sense, assuming the player is used in a withdrawn central role, given such proximity to the wider forwards. However, the 21-year-old is far from ready for such responsibility at that level as a starter, while he should be looking to avoid time as an understudy. “I don’t want to go somewhere and just stay on the bench,” David told the Guardian before joining Lille. “It’s about taking the right step.”

Without Galtier, Lille have failed to match last season’s vintage despite keeping the vast majority of their team together. David and Sven Botman are the only players to maintain obvious progression and, with Europe looking increasingly unlikely, they could soon lead a belated exodus. This season could be pivotal for David’s career as a whole.

“There’s no one to tell you, don’t do this, don’t do that,” David explained to SoccerBible in July, referencing his move to Belgium. “You have to figure it out.” Although issues over his position, finishing and consistency persist, David has considerable room for further growth and the talented Canadian forward has proven throughout his career that finding the right solution, both on and off the field, is an area in which he excels. Another season of problem solving could yet see the much travelled 21-year-old move on once more.