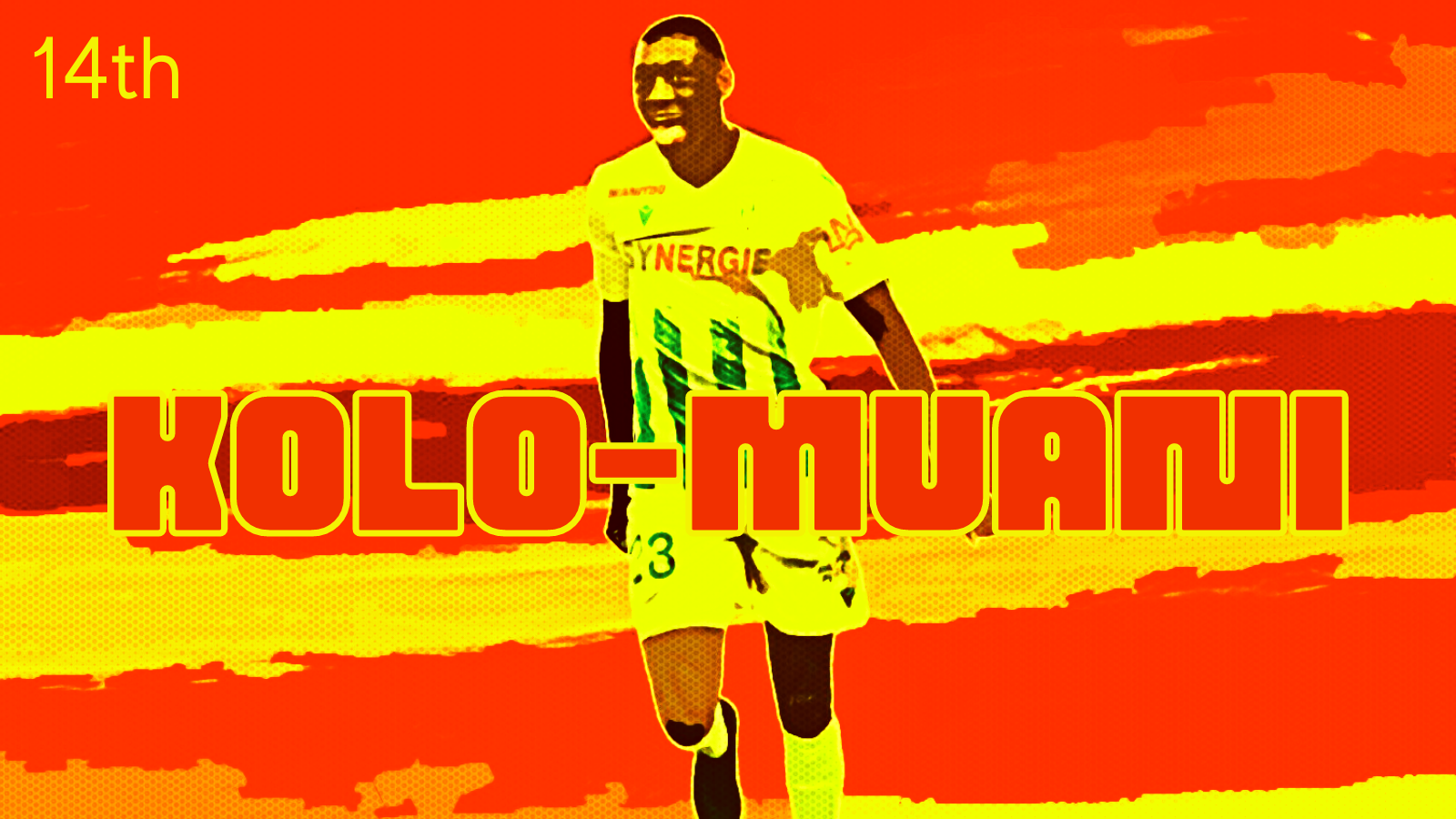 This feature is the latest in our series looking at the top 20 hottest properties in Ligue 1; those players to keep an eye on this season and who are most likely to feature heavily in the 2022 summer transfer window. Look out for number 13 tomorrow and follow the run down in full here on GFFN.

Nantes found themselves in dire circumstances last season. Staring down the barrel at relegation after one of their worst seasons in their modern history, Les Canaries needed someone to depend on. That man was 22-year-old Randal Kolo-Muani. The Paris born forward became one of the most promising talents in Ligue 1 as his performances played a big part in helping Antoine Koumbaré’s men to safety.

With 17 goal contributions in the league, scoring nine goals while adding eight assists plus a relegation play-off strike against Ligue 2 hopefuls Toulouse, Kolo-Muani was Mr. Dependable for Nantes last term. Nantes are a historic club, last winning Ligue 1 in 2001, and relegation would’ve been a travesty. The French under 21 international had a hand in 36.2% of Nantes’ league goals, meaning, without him, that nightmare may have otherwise been a foregone conclusion.

Born in Bondy, the same Paris suburb where Kylian Mbappé was raised, the young Kolo-Muani played for local side US Torcy where his talents were spotted by Nantes. Having moved to Brittany in 2015, the forward signed his first professional deal in 2018 after impressive performances for Les Canaries’ reserves before making his senior debut in a 3-0 defeat to Saint-Étienne in November 2018.

Initially, Kolo-Muani struggled to make an impression, however, and was limited to just four first team appearances in the 2018/19 campaign. Searching for minutes, he was loaned out to third tier Boulogne where he soon flourished thanks to his creative abilities rather than goal scoring talents, making five assists in 14 appearances while scoring three times.

Upon his return to Stade de la Beaujoire, Kolo-Muani quickly established himself as one of the most sought-after talents in Ligue 1 during the 2020/21 campaign despite playing for a struggling side and suffering through three coaching changes. It was his goal and assist that earned a famous 2-1 win at PSG back in March, nonchalantly jinking passed Marquinhos to slam home an equaliser, before four goals in the final three games made sure Nantes avoided the bottom two. Those displays catapulted the young forward into Sylvain Ripoll’s Olympic squad last summer, and, despite a woeful French campaign, Kolo-Muani was perhaps the only young player to emerge with his reputation enhanced.

Although discussion over what exactly his best position is continues, given his abilities as a number ten and out wide, Kolo-Muani has primarily been deployed as a centre-forward in France but tends to make runs into the wider channels. His intelligent movement and ability to run in behind makes him unpredictable for defenders. With blistering speed, the versatile forward is often found harrying opposition defences to win the ball back as the leader of the press, as highlighted evidenced by his 4.35 successful presses per 90. Kolo-Muani is also useful defensively, averaging 1.36 tackles and interceptions per 90 while adding a clearance per 90 too. In making 5.18 ball recoveries per 90 he’s adept at retrieving possession and launching counter attacks, a very useful asset when blessed with such pace.

Also confident with the ball at his feet, Kolo-Muani attempts 3.31 dribbles per 90 with 1.59 being successful. That may seem unproductive but, when successful, the results are impressive with the young Frenchman averaging 1.25 carries into the penalty area per 90 and 0.2 shot creating actions per 90 which are created from a dribble, placing him in the 98th percentile of top five league forwards. The Nantes man also wins an impressive 2.28 fouls per 90.

Kolo-Muani makes up for a lack of consistent cutting edge via his creativity, tallying more assists than goals across his senior career so far. Nevertheless, just two goals from nine league appearances this season shows Kolo-Muani is, at this stage of his career, still far from prolific but he is very much capable of the specular, as both of those strikes underlined. As a cross was fired in from the left, Kolo-Muani made a smart near post run before gracefully flicking the ball home with the outside of his foot to take the lead against Metz back in August. At Angers, close control in the box thrillingly sat down two defenders and Angers’ goalkeeper Paul Bernardoni before he emphatically fired home as Kolo-Muani stood out in a superb 4-1 triumph.

Unsurprisingly, the 22-year-old has caught the eye across the continent. Eintracht Frankfurt were heavily interested last summer, reportedly offering a five year contract. Playing attacking, expansive football and often counterattacking, Eintracht’s style would have fit Randal nicely. After offers of €5m were rejected and Nantes threatened to report the German club to FIFA, Frankfurt’s interest cooled. Lyon also tested the waters on deadline day as they went in search of a versatile and technical striker but Nantes, so late in the window, weren’t interested in negotiating.

Last January, OGC Nice, RB Leipzig and Brentford were also all rumoured to be interested in the Frenchman. Given their preference for attacking styles with quick and calculated transitions, all would suit Kolo-Muani’s abilities. The 22-year-old’s contract is set to expire next summer and Frankfurt would again appear the favourites with the player free to discuss terms with other clubs from January.

Surprising many, Nantes are a long way from the dire circumstances of relegation trouble this season. That improvement is in no small part down to the form and development of the 22-year-old French forward. A versatile, technical, graceful creator, Randal Kolo-Muani remains Nantes’ Mr. Dependable but, given he’s available on a free transfer at the end of the season with the list of suitors growing all the time, for how much longer?