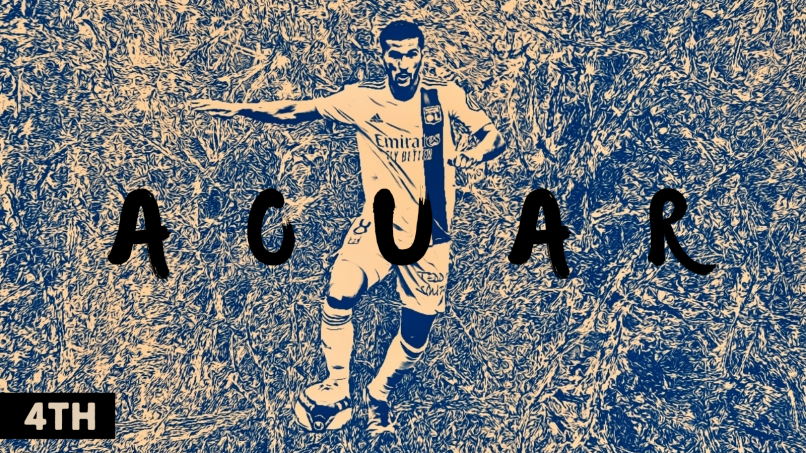 This feature is the latest in our series looking at the top 20 hottest properties in Ligue 1; those players to keep an eye on this season and who are most likely to feature heavily in the 2022 summer transfer window. Look out for 3rd place tomorrow and follow the run down in full here on GFFN.

To paraphrase Jose Mourinho: ‘Nice guys never win, so be a bastard.’ Leaving to one side the accuracy of that statement, in today’s modern game, drive, commitment and assertiveness are under-rated qualities. Usually, natural ability needs to be applied precisely, consistently and with confidence in order to be effective at an elite level. Lyon’s Houssem Aouar has all the ability he needs, but using it to engineer tangible results is where he struggles. It’s why, at 23, his game has failed to develop since breaking through as a teenager. Evolution, however, may finally be near.

Having emerged as a teenager from Lyon’s prolific academy as a graceful, smooth-operating midfield creator, Aouar’s growth stalled hard last season. A sprinkling of influential displays in big wins over Monaco, Nice and Nantes in the middle of the campaign were more than evened out by repeatedly wasteful or anonymous outings across the year. In general, it seemed the sharpness and intensity to Aouar’s game had evaporated during summer 2020 after a standout 2019/20 campaign which returned career best figures of ten assists and nine goals across all competitions, despite the French season being cut short by Covid.

Rarely has Aouar led by example or dominated as an attacking midfielder of his quality should, even against Ligue 1’s weaker sides. Although he impressed in 2020’s rearranged Champions League final eight, since then there’s a sense that Aouar’s lack of presence in games has held him back in his development from a supremely gifted young creator to a reliable leader capable of rescuing and orchestrating his team when needed. With Memphis Depay gone, there is a void to fill in that regard at Parc OL.

Instead, however, his performances have often proven wet and meek as he drifts in and out of matches. While he isn’t expected to tear around midfield launching into tackles, rarely does the Frenchman perform when his teammates might look to him for leadership. Former OL coach Rudi Garcia stated in May that Aouar needed to be “mentally better prepared to face difficulties in a season, or even in a match.”

However, there is, perhaps, a shift underway. Across October, freed by Peter Bosz’s more fluid front four used in the absence of a strikers Moussa Dembélé and Islam Sliamni, Aouar started look like the player his talent insists he should be. His intensity and proactivity notability increased while there’s a feeling that he’s begun to express himself more confidently. An unusually confrontational ‘pipe down’ gesture aimed at Saint-Étienne fans in the Rhône-Alpes derby last month underlined his burgeoning boldness.

Aouar’s inability to regularly and effectively apply his talent is at least partly a failure of coaching. While it’s too early to appraise Peter Bosz’s lasting influence, although signs are promising, if Aouar had been fortunate enough to emerge under one of the world’s leading coaches, Jürgen Klopp or Pep Guardiola, say, rather than Garcia and Bruno Génésio, he might be a very different player today. Although his form over the last 18 months barely warrants such a move, past links to Liverpool and Manchester City remain enticing as a result as Aouar is a player who needs the right guidance and to be emboldened.

Weak form over an extended period has drastically affected Aouar’s transfer stock. Having turned down Arsenal, citing the Gunners’ inability to offer regular Champions League football, amid broad but less concrete interest from other English clubs, Juventus and PSG, Lyon remarkably struggled for any offers at all last summer. A loan deal with an obligation to buy was even considered. This was despite RMC reporting in August Aouar could be one of a group to be transfer listed by Bosz for poor attitude following an abject 3-0 defeat at Angers. Absent from the start of pre-season training after an initial meeting with the incoming Bosz, the Frenchman seemingly has been looking for a way out of the club too.

His contract up in 2023, next summer could finally bring resolution to Aouar’s transfer saga. With just a year to go on his deal and Lyon already willing to accept far less than the €50m Arsenal were prepared to pay, plus the reality of his weakened appeal dawning on both club and player, an opportunity for a cut price and relatively straight forward deal could emerge. If the 23-year-old can maintain his drastically improved form, someone could get a bargain.

As a record of 37 goals and 33 assists across 185 senior Lyon appearances – a goal contribution every 193 minutes – underlines, Aouar’s tangible output needs improving having never reached double figures for goals in a single season across all competitions. However, 4.59 progressive passes per 90 and 2.74 dribbles completed per 90 puts him in the 84th and 89th percentile respectively for attacking midfielders and wingers across the last year in Europe’s major five leagues, according to Fbref. Encouragingly, his output also improves to ten direct goal contributions across 15 career Champions League games to date.

Those numbers underline a recent uptick. Although Aouar can still flitter in and out of games, he’s started to impose himself more regularly this season. A hard fought battle with Saint-Étienne goalkeeper Etienne Green, Aouar eventually breaching the Englishman’s defences in a 1-1 draw, was a highlight, as was a domineering Europa League display against Brondby. Overall, although it’s typically quiet, Aouar is finally starting to develop a steady consistency, influencing OL’s results over an extended period as a player of his talent should, perhaps aided by his captaining of the side on occasion this term.

Aouar’s lengthy dip in form may be partly explained by some troublesome persistent injuries last season and a Covid diagnosis, as often outlined by the player himself. Following October’s win over Lens, in which Aouar scored a rare header, he explained “I feel better and better, I no longer have any physical problems so I’m now at 100% and I can give everything.” A ‘nice guy’ for too long, Houssem Aoaur’s renewed sense of belief and a bullish competitiveness could yet help him become the player he has always threatened to be. This season could yet be career defining.