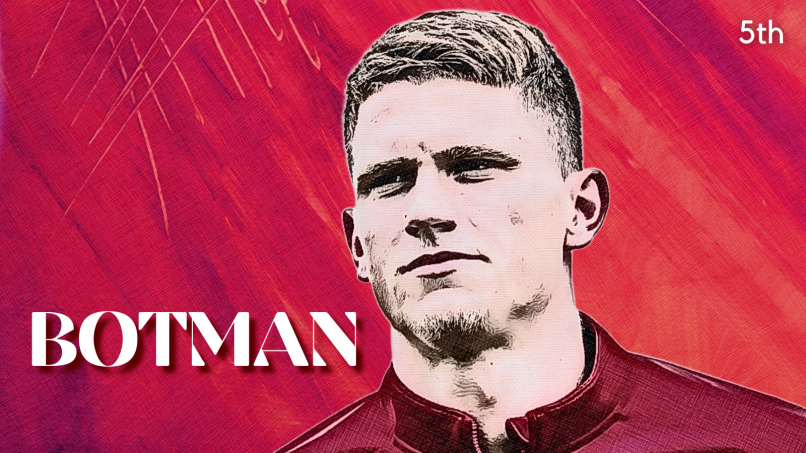 This feature is the latest in our series looking at the top 20 hottest properties in Ligue 1; those players to keep an eye on this season and who are most likely to feature heavily in the 2022 summer transfer window. Look out for 4th place tomorrow and follow the run down in full here on GFFN.

Even the keenest of football analysts will struggle to find a player whose stock has risen as rapidly as Sven Botman’s in the past 12 months. Take his Transfermarkt value for example. In April 2020, the Ajax academy graduate’s value stood a measly €1.3m. By April 2021 that had reached €29m as Botman’s Lille charged towards the Ligue 1 title. Botman eventually finished the 2020/21 season with 20 league clean sheets and, in his first season in a top five league, started 37 games for Lille in their most successful campaign since 2011. Looking at his underlying numbers, he was one of the best defenders in France, not bad considering some labelled him an Ajax academy reject.

Even for a 21-year-old, Sven Botman’s sample size at senior level is small. A graduate of De Toekomst, Botman was promoted to Ajax’s under 19s in 2017, aged 17. Though born on the outskirts of southern Amsterdam, Botman’s career path greatly differs from other Ajax graduates. For one, he is the only member of that under 19 side to be playing outside the Netherlands.

Botman graduated to Jong Ajax, who play in the Dutch second tier, for the 2018/19 campaign, finishing 11th while conceding 67 goals in 38 games with Botman starting 27. The defender scored twice, though, and played seven times in the UEFA Youth league. Yet, for a club like Ajax who pride themselves on maintaining clear paths to their first team, Botman never played a senior minute under senior coach Erik Ten Hag.

Instead, he was loaned to Heerenveen for the 2019/20 season. The Eredivisie was unceremoniously cut short in a similar fashion to Ligue 1 due to Covid but still Botman made his mark across all 26 available appearances. He came up clutch multiple times, notably heading in against AZ Alkmaar in a valuable 4-2 victory. But what really mattered were his mistakes.

In 2019/20, Botman made some poor errors, including an own goal, conceding two penalties and he was directly blamed for consecutive defeats to Fortuna Sittard and AZ Alkmaar. “I had to adapt,” said Botman just before Lille secured his signature in Summer 2020 for €8m. “The pace is faster, so my speed of action had to go up. People might have thought: ‘I don’t know if he can handle it’ – but it went well.”

The then Dutch under 19s defender learned valuable lessons at Heerenveen. Across that Eredivisie season, Botman displayed great pace for a defender and, in the 2020/21 Ligue 1 campaign, he added strength and visionary passing to his growing repertoire. Perhaps these rapid improvements came from being paired up with 37-year-old Lille captain José Fonte, who later told La Voix du Nord “Sven is a calm player, he wants to learn and he learns very fast”.

Botman was imperious last season, often looking unbeatable both on the ground or in a dogfight. He won 69.3% of his headers and 62% of his ground duels according to Sofascore, putting the Dutchman in the top 10% of Ligue 1 defenders for both metrics. Botman is not only a cultured passer but, crucially in today’s hyper-modern game, left footed. The craving for a left footed centre-back is high amongst most top level clubs as having a left footed player on the left side of the pitch can open up passing angles that a right footer can’t.

Passing statistics can be distorted by possession or playing style and it’s often hard to combine the eye test with the numbers in this regard, however, Botman confirms his own quality. Only Benjamin André has completed more progressive passes since Botman joined Lille, showing that, even if Lille naturally move the ball down the left, Botman has been entrusted as a main passing outlet by two different coaches.

These numbers and observations outline one of the most desirable templates searched for by clubs right now. A young, talented defender who’s strong in his own box, promising in ball progression, has a league title to his name and is left footed. All he’s missing is a cap for the Netherlands, which will surely arrive soon.

Valued at just over €29m, plenty of clubs have been linked to Botman over the past six months, Wolves and Atalanta chief among them. The Italians make the most sense. Gian Piero Gasperini’s side have an impressive recent history of developing young talent and, with Serie A defender of the year Christian Romero moving to Tottenham, there’s also a Botman-sized hole that needs filling.

Wolves’ bid depends largely on their success this season. Under former Benfica manager Bruno Lage, they’ve started the campaign as one of the most shot-heavy teams in the Premier League. However, Botman is currently playing Champions League football with Lille and, as a Ligue 1 champion, he may have his eyes set higher than battling for the top eight in the Premier League.

Despite Botman’s desirable qualities, most of Europe’s elite are well stocked in defence right now. Chelsea seem set on signing a right sided centre-back like Sevilla’s Jules Koundé. Manchester City, Liverpool and Man United have recently strengthened too. PSG signed Sergio Ramos, Real Madrid acquired David Alaba and Bayern Munich brought in Dayot Upamecano. Nevertheless, Botman would still be a worthwhile signing for many. His speed and strength combined with his growing quality on the ball makes the 21-year-old a poster boy for modern European centre-backs. Should the French champions fail to reach the top five this season, they could be more open to selling their prized defensive talent in 2022.