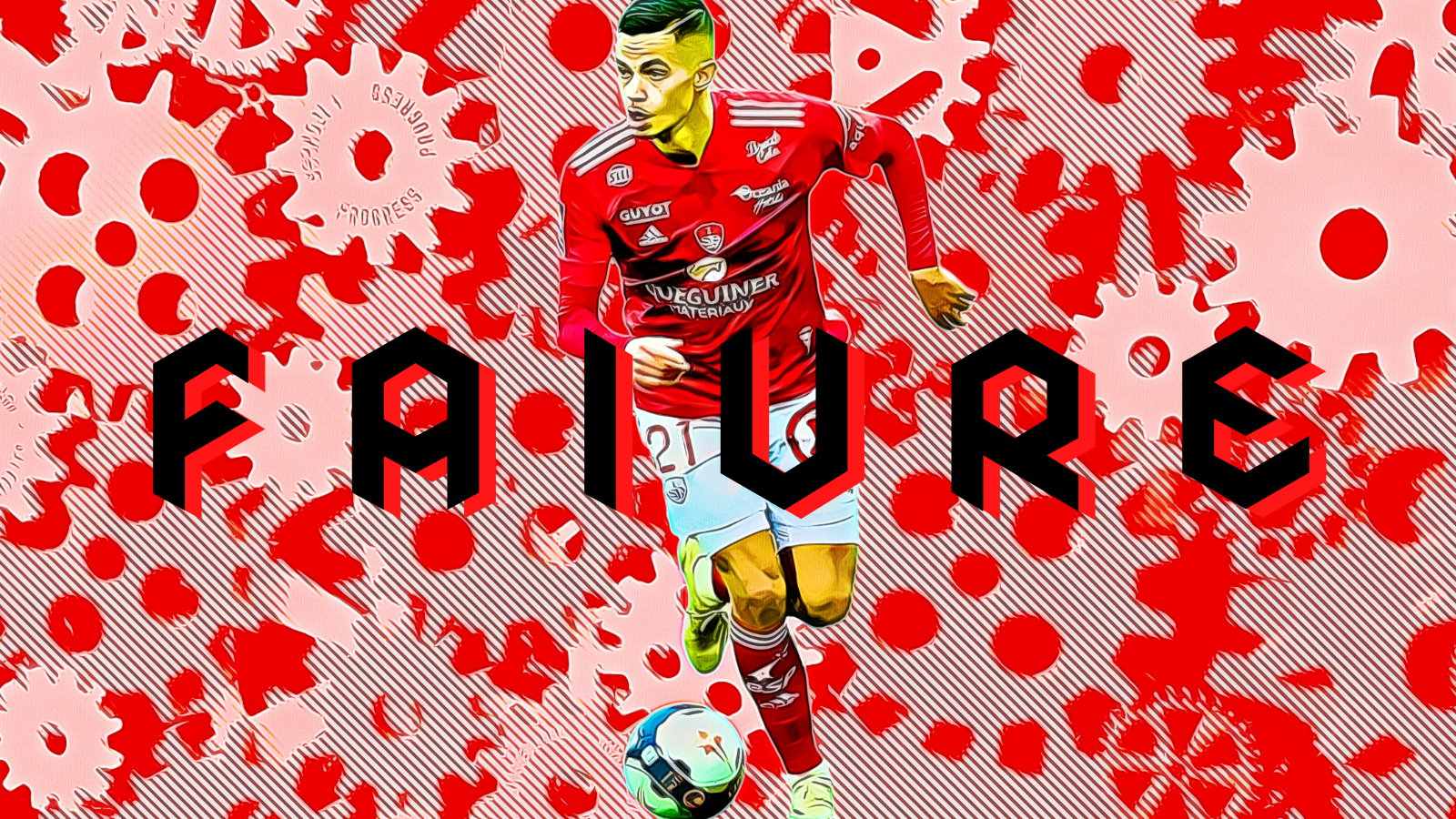 This feature is the latest in our series looking at the top 20 hottest properties in Ligue 1; those players to keep an eye on this season and who are most likely to feature heavily in the 2022 summer transfer window. Look out for 8th place tomorrow and follow the run down in full here on GFFN.

“In football, you can be the king of the world one day and be very low the next,” Romain Faivre told Ouest-France earlier this year. Unwittingly, the Brest attacking midfielder neatly summed up his own form and undulating career. Precociously talented as a graceful, visionary number ten, cast in the mould of some of France’s greatest creators, the late-blooming Faivre’s immediate future is destined to be away from Brittany. But the prospect of longer term success remains uncertain.

Few in France can match Faivre’s ability to progress play via his direct dribbling or by picking a defence dissecting pass. They’re two attributes the player prides himself on. “What makes the difference between a good player and a great player is the ability to play forward, to break lines, to find the passes,” Faivre explained in February. An elegant creator, Faivre’s former youth coach Didier Jousse told First Time Finish, Faivre had “a left foot like a hand.”

Comparisons can be made with Hatem Ben Arfa, a player Faivre describes as “a genius” and with whom he bears more than a striking physical resemblance. Mirroring Ben Arfa’s illusive dribbling, by mid-October last season, Faivre’s lightning start included a 68% dribbling success rate, surpassing Neymar’s 51% at the time as Ligue 1’s leading dribbler. Although often deployed out wide, Faivre’s best position is his favourite, as a number ten. Tellingly, the Frenchman told L’Équipe in January he “adores Ronaldinho, he really made me love football.”

Such ability has brought some major highlights for Faivre after emerging at the start of the 2020/21 campaign. Most memorably, Nice (2-0) and Saint-Etienne (4-1) were dismantled last Winter by Faivre, who’s header also beat title chasing Monaco. This season, Faivre posted perhaps the performance of the year so far as he inspired Brest’s ultimately unsuccessful second half comeback against PSG. It was his glorious back heel assist for Frank Honorat that got Brest back in the game just after half time before a run from inside his own half ended with a deft assist for Steve Mounié to again reduce the gap late on.

Defensively, meanwhile, Faivre’s game has also markedly improved of late. A new found tenacity and an ability to read play is underlined by the fact that his 1.9 tackles per 90 minutes and 1.04 interceptions per 90 over the last year puts him in the top 15% and top quarter respectively in each category across Europe’s traditional ‘Big 5’ leagues, when compared to players in his position.

Although Faivre is already 23, he remains surprisingly inexperienced at senior level. Only fleeting appearances under a succession of coaches meant the majority of his playing time at previous club Monaco came with the reserves in France’s sprawling fourth division. Having joined Brest, the 2020/21 campaign was his first full senior season, meaning only 47 Ligue 1 games have been accrued so far.

Having missed out the rigour, intensity and street smarts that are often bred when playing at a high level as a youngster, Faivre notably lacks consistency, and often a certain presence, in his performances. For each thrilling effervescent display, such as the one against PSG, there are several vacant and ineffective outings. It’s a flaw Faivre freely admits. “At times, I disappear,” the Frenchman conceded last year. “When my team has less of the play, I mustn’t let myself get frustrated. I’m 22, this is my first pro season, some start at 18 in Ligue 1. Everything is relative. I’m still learning.”

This calendar year hasn’t accurately represented Faivre’s true level either. The first half of last season, with Faivre plunged into the hectic Ligue 1 life as a starter at Brest having been barely on the fringes at Monaco, brought by far his best form. Freed by Olivier Dall’Oglio’s characteristic joyously expansive outlook, Faivre led a form Brest side in what seemed to be a burgeoning European challenge.

Faivre’s first 16 league games brought seven goal contributions and a string of sparkling, creative displays but just four more contributions were added across the rest of the campaign as Brest barely avoided relegation. With little initial warning of his quality, Ligue 1 defences may have simply taken their time in learning to combat Faivre, the player suggesting as much back in February. “Compared to the first part of the season, I can feel more players in my zone,” the former France under 21 international said. “They stick to me and prevent me from turning. A lot of things have changed, I have to adapt.”

Regardless of his occasionally glorious but often anonymous form during the second half of last season, Faivre received considerable summer interest. His contract running to 2025, a €15m asking price brought enquiries from Bayern Munich, AC Milan and Borussia Mönchengladbach. Both Gladbach and Milan were on the verge of signing the Frenchman before both deals collapsed. The German side were unable to free up funds by selling others. Meanwhile, despite a call from Paolo Maldini and the player refusing to travel to Strasbourg in August, Faivre later apologising, Milan were unable to broker an agreement with the Breton club.

This season, the 23-year-old’s form has been intermittent. Three goals and four assists in his first ten games represents a solid return for an attacking midfielder playing for a side without a win so far, and under the traditionally more stoic Michel Der Zakarian. However, the local press have questioned Faivre’s commitment and that PSG performance – perhaps an attempt to sell his qualities to an interested party – hasn’t been matched. “We expect more of him,” Der Zakarian stated earlier this month. “Whether that’s in how he creates, providing better passes, being more efficient or scoring more goals.”

“I have to be more decisive,” Faivre agreed earlier this year, and he’s correct. Regardless of his creative elegance, Faivre needs to add consistency, leadership and gumption to his play. That big move, perhaps to an elite European club, is all but secure it seems and Faivre has the ability to transition from a good player to a great player, but feeling like the ‘King of the World’ once more is still a long way off.