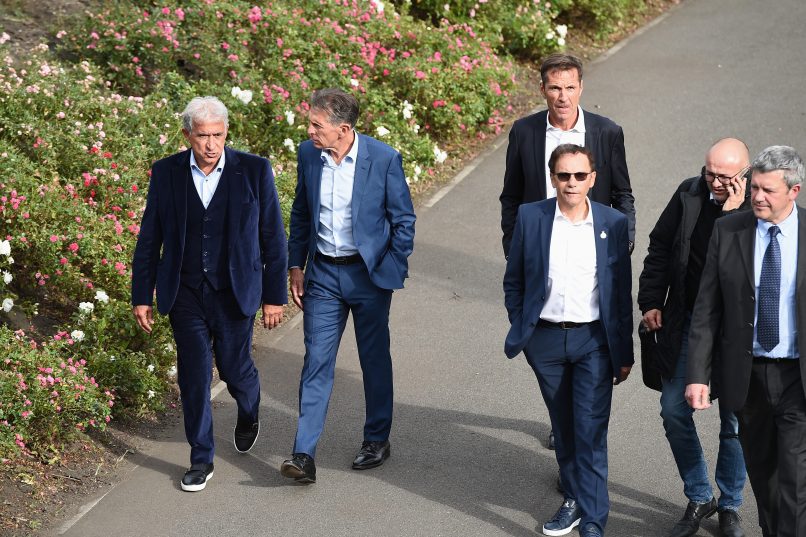 In an open letter written by Ligue 1 side St Étienne co-presidents Roland Romeyer and Bernard Caïazzo, the duo confirmed that they have made the club available for sale.

The open letter in full:

“In the context of the global pandemic that we are all aware of, our primary duty is to protect the employees, be they involved in the sports side or the non-sports side, who are mobilised and applying themselves without stopping in the life of the club, with a level of determination that honours them. They have enabled, through their professionalism and their devotion, to keep the green flame alight despite the storm unleashed by COVID-19. They must all be thanked.

We also have a strong message for all our supporters with whom we share the frustration of not being able to see them in the stadium to encourage their team. They represent the most precious asset of this popular club which has built its story on the mythical fervour of its fans and how attached it is to the fundamental values ​​of its city, of its region. We look forward to the moment when we will be able to come, all together again, around our shared passion, in the Chaudron. Finally, we warmly salute all of our partners who, far from wanting to take a step back from the club, remain faithfully present by our side. They are an essential cog for the development of ASSE.

We decide to make public statement today because we feel the need to share with you our vision for ASSE in this period marked by the propagation of rumours and untruths that harm the serenity of the club, as it continues to seek to maintain itself in Ligue 1.

Since 2004, we have not succeeded with everything but entrepreneurship means accepting the risk factors associated with any adventure. While our club had not been Europe since 1982, we were proud to come back to the big leagues and face such prestigious clubs as Inter Milan, Manchester United, Lazio or Werder Bremen. In total, we played 56 European matches during this period, which makes us one of the best French representatives over this time.

Who could forget that memorable day at the Stade de France, all dressed in green, the scene of our team’s victory in the 2013 Coupe de la Ligue final, the first trophy won for over 30 years? Who would have thought that before COVID-19 hit, ASSE finished an average of 5th in Ligue 1 over the past 10 years? And that in the UEFA hierarchy, we would be ranked 4th among French clubs? Who could not be happy that after two finals in 2011 and 2012, our young prospects ended up winning the 2019 Gambardella Cup?

Could we have done better against our competitors who are richer than us? Maybe. But be proud to have returned to Europe. Thanks to our coaches and players who more than contributed, and to our fans for having accompanied us as we climbed back on the sporting side.

Over the last 18 months, we have been writing a new chapter in our way of operating under the director of Claude Puel who decided to put his full faith into our young players and to count on integrating them into the professional set-up. We can already see the initial impact of this. St Étienne is the club in the top 5 European leagues to have played the largest number of players under the age of 21 since the start of the season. This first result is a sign of encouragement to continue with our efforts in terms of producing youth prospects, who remain the very DNA of this club.

Thanks to Claude Puel, his coaching and medical staff, to all of the coaches and also the more experienced players for which each day shows the path to take. Because this sporting strategy is the only one that will enable us to eventually rival our richest of opponents.

In the off-pitch domain, under the direction of Jean-François Soucasse, the club is leaning on high level executives and teams with renowned competency, mobilised around an ambitious strategy and virtuous management. Over the last 10 years, only St Étienne in Ligue 1 has had positive financial results, verified by two auditors and the DNCG, which makes any irregularity impossible. Two seasons ago, Les Échos newspaper ranked ASSE in the top 4 of the best managed clubs in Europe. Without COVID-19, and despite the failure of Mediapro, our club would be profitable today. In an extremely tense situation where all clubs in Europe will suffer serious financial losses, ASSE will still be among the best performers at the end of this year. But like others, we will have to take up the challenge of the coming seasons, in an economic and health context that is still uncertain.

It is inevitable that modern football requires ever greater financial resources, as everyone can see in France, with the consistent arrival of foreign shareholders in Monaco, Lille, Marseille, Paris, Lyon or Nice. ASSE has to this day a unique model with a shareholder base around humans. We are the only major French club not to belong to a financial power of international stature. This is our strength and, also, somewhere, our weakness. That’s why we have to prepare for the future.

As a result, in order to assure continuity and the development of our club, we have entrusted a reputable investment bank with the mission of selecting the best investor. We will ensure that this new shareholder has the appropriate means to grow the club, secure employment and perpetuate its identity. We will be vigilant that the handover can take place in a confidential manner.

Our club has the necessary weapons to embark on a new era. Never denied, the attractiveness of ASSE goes beyond borders. The fervour of our supporters is one of our essential assets, along with the value of our players and the excellence of our youth academy.

In unity and solidarity, we want to turn a page for the sake of ASSE. And this new story will be written with you…