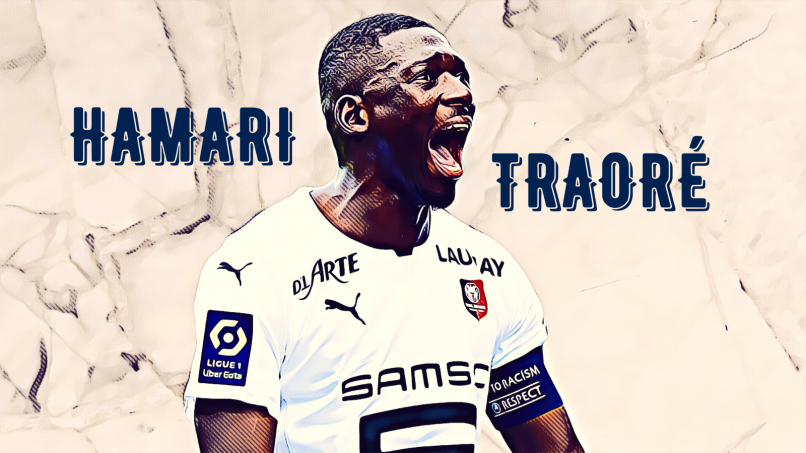 Despite being a leather-lunged ever-present for Stade Rennais, and having been a key figure in what’s unequivocally the club’s best run in their history, including a first-ever appearance in the Champions League, Malian right-back Hamari Traoré has always suffered a lack of reputation.

Born in Bamako, he made his first foray into European football with Paris FC, having come through an academy run by former France international Jean-Marc Guillou. After a solitary season in the first team, he moved to Belgium to play for top-flight side Lierse, where he came a regular in his second season, helping the club narrowly avoid relegation.

A move to Reims, then in Ligue 2, followed, and it was under Olivier Guégan that Traoré first impressed. Benefitting from a move into cetral defence on the part of Aissa Mandi, he made for a pacy and deceptively strong presence despite his apparent lack of height or physicality, his shuttling runs up and down the flank doing much to pin back his opposite numbers. With Hassane Kamara doing much the same on the opposite flank, the Champagne side were a difficult opponent, even if a historic comeback by Toulouse consigned the club to relegation by a single point, the team’s hopes of survival undone by a lack of attacking talent.

A radical restructuring of the team would follow that summer, but Michel der Zakarian’s arrival would see the club miss out on the playoffs, and 2017 saw Traoré on the move again, joining Stade Rennais. Along with Ismaïla Sarr and Faitout Maouassa, Traoré was part of an ambitious overhaul on the club’s part, and despite facing competition from club legend Romain Danzé, he was a starter from day one, helping the club to finish fifth, despite missing a month on the sidelines.

The following season saw further progress on the part of the club, with the team making a historic run to the last 16 of the Europa League and winning the Coupe de France before finishing third the next campaign. While the team’s maiden appearance in the Champions League didn’t exactly go according to plan, Traoré has continued to play with the same combative verve as always, whipping in crosses with aplomb and urging the team forward.

Now club captain, the arrival of players like Gaëtan Laborde and Martin Terrier has further burnished his assist numbers — only Jonathan Clauss has more among the league’s full-backs — and man of the match displays against opponents such as PSG and Lyon are also to his credit. Now 29, it’s unlikely that Traoré will make another step up in his career, but he continues to be what he’s always been: a willing runner, adept at crossing the ball and eager to get stuck in, making him a firmly above-average Ligue 1 full-back.