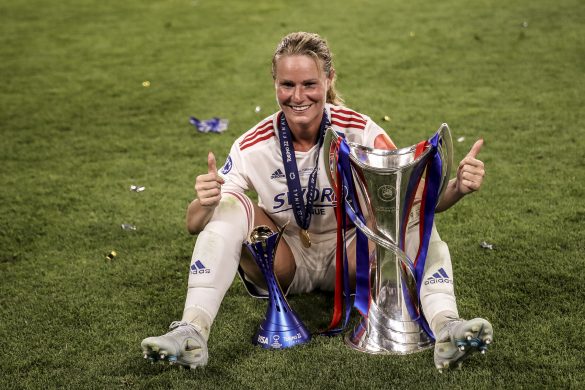 In an interview published in today’s L’Équipe, Lyon’s Amandine Henry discussed France manager Corinne Diacre’s decision not to call her up for the upcoming Euros in England, despite a strong end to the season which notably saw her score in the Champions League final.

Henry has been absent from the team since November 2020, after an interview in which she called for a meeting with Diacre to discuss Les Bleues’ issues within the team. She is nevertheless open to a reconciliation with the former Clermont coach and hopes to play in future tournaments.

In what state of mind are you?

I’m on holiday. I’m resting up with my family. I wish them the best. The manager has made her choice. I think I’ve put a [good] season in. I think I’ve performed well, but I’m not there [in the team]. So there, my performances were not good enough to be there. I’ll try to do better next season.

Is it really a sporting choice?

That’s what she says. If she says it, I believe her.

We’ve been French and European champions with Lyon for the last 15 years. I don’t think it was just a one-off performance. But then that’s what she says. It’s noted. But it just doesn’t add up, that’s all.

How do you evaluate your season?

I think I’ve had a good season. At the start I played in central defence, and even though that’s not my position I think I’ve done as well as expected. In January I came back into form and I finished the season as a defensive midfielder, where I felt at ease, especially playing alongside Lindsey Horan.

Have you had an explanation from Corinne Diacre?

Nope, not at all. Since our phone call [in November 2020 to tell her she wasn’t called up] which lasted 10 seconds, I haven’t had any news.

Do you not think you have your place among the five best French midfielders?

In what way has she changed, according to what the players tell you?

Apparently she’s a lot more open and smiles more. I wasn’t there, but that’s what I’ve been hearing.

Are we to understand that she thinks the trust between you was broken by the interview?

I don’t understand that at all. Things were said internally. The president [of the FFF Noël Le Graët] was aware, we spoke with the coach and several of the girls, who also aren’t there either, like Eugénie Le Sommer. Then, it was her [Diacre] who started to talk in the media. I had to give my point of view as well.

Would you be able to reconcile with Corinne Diacre?

Yes, why not. I will always be a player who is available for the French team, whether that’s Corinne Diacre or someone else. I miss the French shirt. It’s the high point for a player.