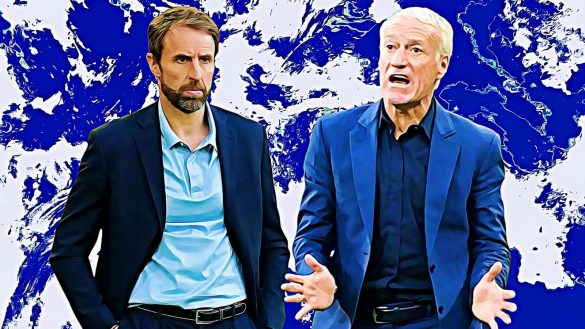 France take on their biggest challenge of this World Cup as they face England in the quarter-finals this weekend. While the defending champions may be seen as the favourites, there is a good case to be made for England to be the more balanced team.

England has been solid on both sides of the ball. Outside of two late goals against Iran, one being a penalty, England have not conceded during this World Cup. On the opposite side of the ball, they’ve been dangerous, scoring 12 goals via eight different players in this World Cup. If England can get the ball to their wide attacking players, there will definitely be a match-up issue against France’s defence after Didier Deschamps neglected to bring any true full-backs. If you look at France’s first half against Poland, there was a real issue on the right side when Griezmann left Jules Koundé to defend alone on the counterattacks.

France do have a few areas where they can take advantage against England. If you look at England’s match against the United States, England’s worst performance during the World Cup, you can find a blueprint for Les Bleus. Not only did the United States play a similar style to France, but they deployed a midblock which stopped England from getting the ball to their dangerous attacking players in midfield. This is something France will look to do also.

If Kylian Mbappé plays on the left side, the matchup that may determine the game will be his battle with England’s fastest defender, Kyle Walker. This should be a one-on-one matchup for Mbappé as England cannot afford to divert their players away from France’s other attackers. If Mbappé wins that match, France will win the game.