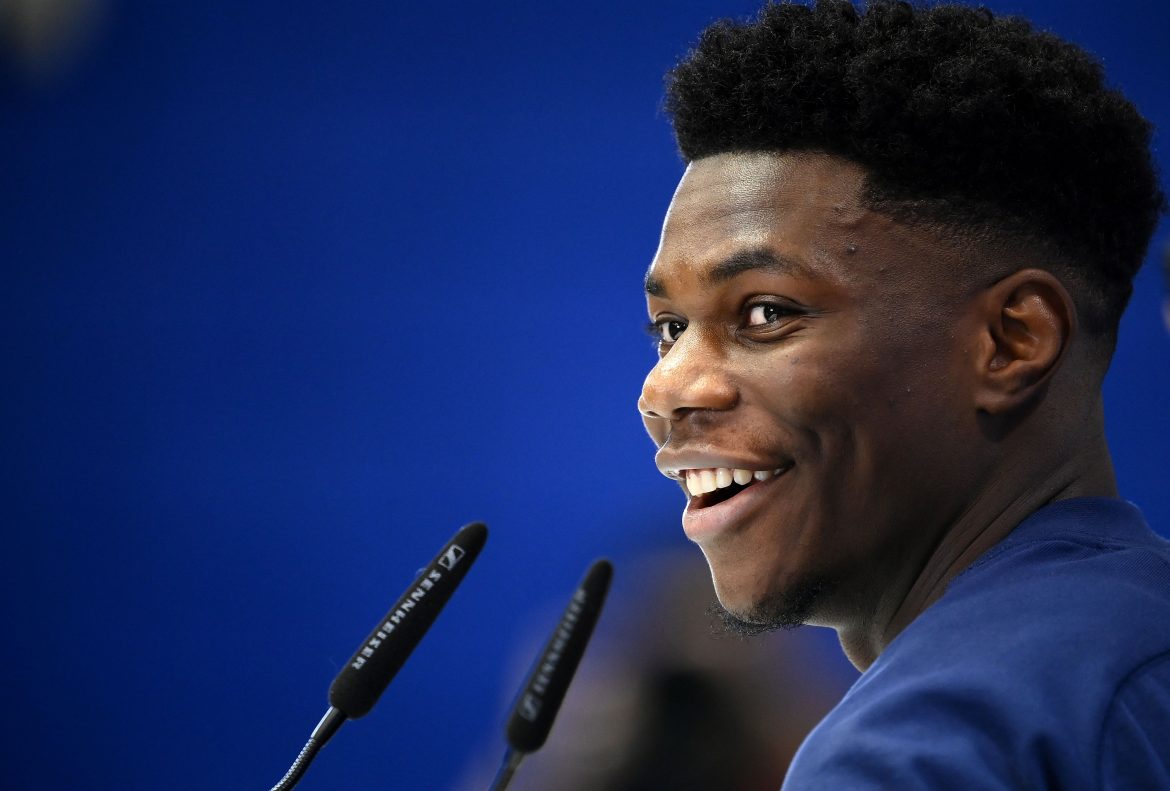 Aurélien Tchouaméni may be on top of the world, but just like many other players, his first experience with the game came from his family. In the final addition of L’Équipe’s special on Les Bleus fathers, Fernand Tchouaméni spoke about his son before everyone knew who he was.

Aurélien’s football story begins at his youth club, SJ D’Artigues. From a very young age, he was a stand out with the local club. His father stated, “Girondins (Bordeaux) circled around the kid for a long time. He must have scored 14 goals in the Girondins Cup. The next day, they were at my door… I pushed them away for four years, from U7 to U11…. I was more in favor of letting the kid have fun. Also, at the time it just wasn’t feasible. His mother worked in Charente, a 120 km round trip. It was on the other side of town.”

Tchouaméni shined playing against Bordeaux and the big fish in the pond wanted the bright young prospect. The club was finally able to convince his father to make the move from Artigues to the then Ligue 1 club by his U11 season.

“Artigues (east of Bordeaux) had an exceptional 1999 generation (Aurélien, a 2000 birth year played up). With the Girondins, the two flagship clubs of the department (region), it was war every time they met. When they beat Bordeaux in the final of the regional tournament, there was a lot of crying.”

After going to Bordeaux, Aurélien started attending boarding school at the age of 13. To deal with the distance and separation from his family, Aurélien’s father spoke about them speaking with each other daily by phone. But when he was at home there was no slack given to the young player.

“We instilled in him the rigour, the culture of work without crushing people, so that he gets by with his skills . . . At home he had a mother (principal education adviser), so you can imagine the rigour – no TV or video games during the week. She even hid the console cable. Except when he found it (laughs).”

Fernand explained the motto he raised his son by: “Do what you want as a job – painter, gardener, etc. –  but be the best.”

With that type of mindset, you can see how the former Monaco player began to work towards professional football as a youth. Football became just a tool to teach his son about life. Fernand went on to say, “I accompanied him all the time, I scoured the grounds of the Southwest. We discussed football. That’s what has always linked us.”

Football was a large part of the Tchouaméni family. His father was a Bordeaux supporter and not only took him to watch the team, but to watch Fernand play as a young child.

“He also came to see me play football. He stayed at the edge of the field with a ball. At 6-7 years old, he was just proud to see his dad play. Around 9-10 years old, he made fun of me. He often says: ‘My father played football, well, he was trying.’ (Laughs)”

The importance of family seems to have stuck with Aurélien. His father spoke to his character and seemed to be proud of his son’s grounded nature.

“He plays at Real, but when he comes to Paris, he doesn’t want to sleep in a hotel and goes to his aunt’s … ’It’s been a fortnight since I’ve seen you (to his mother), come see me in Madrid.’”

The story of Aurélien’s childhood speaks to a mutual respect between a father who understands his son’s talent and ability and a son who respects his father to help him mature as a young man and player.

“In Bordeaux, I was very hard on him… In December, when we were on vacation in Paris, I told him ‘I want to see you alone.’ I said to him ‘You’re an ordinary player! We don’t talk about you. Nothing. You don’t make the front page of any newspaper. You play quietly…’  It hurt him. He left my hotel room a little angry. The next day, he said to me, ‘You’ll see…’ Three weeks later, he scored his first goal in Ligue 1 against OM (3-1). It had touched him! Moreover, he sent me a message  ‘your ordinary player, huh!'”

Aurélien Tchouaméni is a player well beyond his years. You can see it in his body language and when he speaks to the media. The only thing more impressive than that is his presence on the field. However, after hearing his story it is easy to see where it all came from.

Thierry Henry congratulates Olivier Giroud every time that he scores