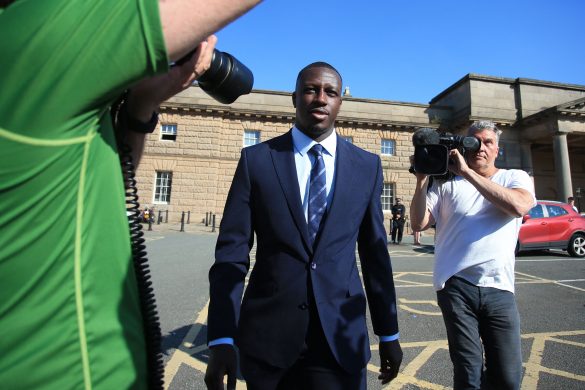 BBC News report that the trial of French left-back Benjamin Mendy continued on Wednesday with a pre-recorded testimony from one of his accusers, who detailed an alleged attempted rape in October 2018 in which she was “trying to push him off” while “he kept pulling me down”.

The account is related to the charge number one – in total, Mendy is accused of over eight charges of rape, one of attempted rape and one of sexual assault, involing seven women, all of which he denies. He is standing on trial with Louis Saha Matturie, who himself denies twelve charges involving eight women.

The woman said she had been invited to his home the year after meeting Mendy and a friend – footballer Diacko Fofana – in a club in Barcelona. The court was told that they then went to a Manchester restaurant and then two clubs, and that Mendy told her while she was with his friend, “when he’s not looking, I’m going to kidnap you.”, which she says to have initially interpreted as a joke.

She goes on to say that she spent the night in a bedroom with his friend, and that the next morning she saw Mendy sitting on a settee while she was looking for a phone charge. She turned down his offer to go to his bedroom to get a charger, and he then began “teasing” her, she said.

The account continues, explaining that on returning to the bedroom she went into the shower, but then saw Mendy walk in, and she told him to leave. The woman explained that she tried to wrap a towel around herself and grabbed some underway, but that Mendy snatched it from her and “did not want me to have any clothes”.

She then says that he kept “obstructing” her; “I kept pushing me away, he kept grabbing me back”. The woman added that Mendy “sat on the bed and put me on top of him”, in and that she “kept trying to push him off. He kept pulling me down. We fell… That’s when he took off his boxers”. She said that she “kept saying ‘stop’ and ‘no’, but that wasn’t heard”, and was wondering where his friends were and whether she should scream.

The jury was then told that she was convinced to come forward make a complaint back in January of this year, having gone to a police station in London to make a report after her GP suggested she do so in August 2021, in the wake of the defender’s arrest – the GP’s notes were read out by prosecutor Timothy Cray earlier in the day. The trial is set to continue and last another three months.