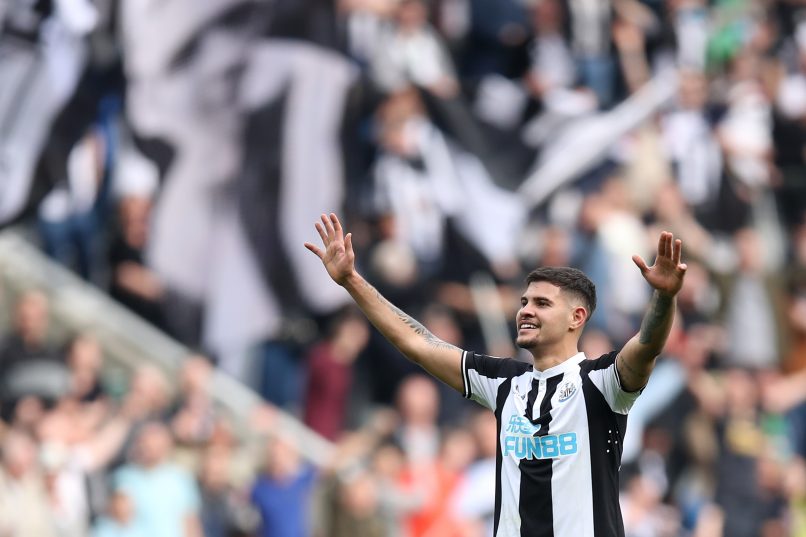 After scoring his first brace for his new club Newcastle United last weekend against Leicester, former Lyon midfielder Bruno Guimarães (24) spoke to Newcastle’s media team in an interview published on their official website. During his interview, he discussed his relationships with fellow Brazilians Juninho Pernambucano, who was Sporting Director at Lyon (2019-2021), and Lucas Paquetá (24).

He was really important to me. I talked to him a lot and I still talk to him today. He provides me with a lot of advice, he’s a friend I’ve made through football. He was decisive in bringing me to Lyon. He convinced me to join. If it wasn’t for Juninho I would probably have gone to play elsewhere. He really helped me a lot, and when he left and moved on from Lyon, it was sad for me given how important he was. He was an amazing player too, a great free kick taker.

Ah, Lucas Paquetá! He’s my brother, my best friend and we get on really well. We have the same way of thinking, we’re the same age and we were together every day, always talking amongst ourselves. He’s a member of the family that football gave me.

On his own development at Lyon:

I gained that physical presence at Lyon. When I arrived there I was very skinny, so I developed that physicality at Lyon. I’ve got my own personal trainer and I do a lot of work at home too.

It’s a different culture, Brazilian and French. In France the football is very physical, you know? It was difficult, my first six months. But after, football is football – in countries, it’s the same. They start quickly, but here in England it’s so, what can I say, intense? More intense. That is the difference in the leagues.