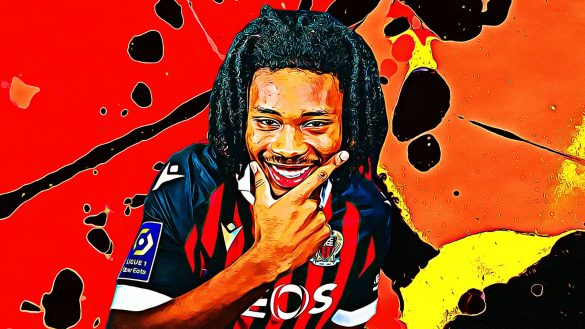 OGC Nice’s Khéphren Thuram has arguably flourished in spite of, not because of, his surroundings in recent months. The France under 21 international showed sparks of spontaneity and excitement in a rigid Christophe Galtier midfield last term, and he will need to continue to provide those moments in different circumstances this season if he is to continue his progression.

Thuram quickly became undroppable for Nice last season. Whilst his midfield partners in Galtier’s 4-4-2 changed, he remained a constant. During the club’s struggles after Christmas last season, he was one of very few players to continue to impress, finishing as the club’s young player of the season while being nominated for the league-wide award.

Continued development will mean overcoming another set of hurdles this year. As well as adapting to a new manager, a new style of play and a new formation while Thuram also has new midfielder partners to jell with. The speed with which he constructs an understanding with Aaron Ramsey and Ross Barkley in particular will be important for his progress, as will be the role he plays in a reconfigured midfield under Lucien Favre. The now 21-year-old shines within certain systems or styles, looking best suited to a side that presses aggressively and looks to progress the ball quickly in transition.

Interview by the club’s media, he joked about working on a Zlatan Ibrahimović-esque physique. Although he currently lacks that muscle, he’s certainly imposing. At 6’4 he towers over many other midfielders and his spindly figure, coupled with his pace, affords him the athleticism to press efficiently. He adopted Galtier’s pressing instructions well last season, which helped win back possession in dangerous positions and provide attacking momentum. In a world obsessed with statistics, Thuram sees this as his main role and has little interest in the numbers part of the game in terms of goals and assists. “I defend better, and win the ball back more than I did last season. That’s what’s required of a midfielder,” he said.

Upon retrieving the ball, the Frenchman often breaks forward quickly, displaying either his wide range of passing or his direct dribbling style. It’s in these rapid transitions that Thuram impresses most. Although he may not have the goals contributions to show for his offensive efforts, recording four goals and three assists in 41 appearances in 2021/22, he contributes heavily to the team’s efficiency.

Thuram speaks about how he likes to “help his teammates play,” about his direct mentality when it comes to forward passing and how his pre-assists contribute to attacking phases. These attributes make him hard to pigeonhole. He has the defensive characteristics of a top-level number six but the capacity to spring forward and be an instigator of attacking moves. He certainly isn’t the kind of player to defer creative responsibility and his ability to propel Nice forward is underlined by his 74.4% dribble success in Ligue 1 last season, the ninth-best in the division. Although his success rate has dropped slightly this season, he again features in France’s top 10.

In many ways, Thuram isn’t so dissimilar to former Monaco midfielder Aurélien Tchouaméni. Like Tchouaméni, who joined Real Madrid this summer, Thuram lies somewhere between a number six and a number eight. However, the Nice man’s development hasn’t perhaps been as linear or as tranquil as that of his compatriot, who has settled quickly in Madrid and become a consistent part of Didier Deschamps’ France squad. Tchouaméni played in a settled system alongside a regular partner in Youssouf Fofana at Monaco, but there are lots more moving parts to Thuram’s development and he will have to find his place in Nice’s new-look midfield this season.

However, should he do so, Thuram won’t be short of suitors in the coming windows. His versatile skill set should make him a sensible option for many top sides, whilst his price tag, only set at around €15m last summer according to L’Équipe, will be sure to tempt many European heavyweights. PSG reportedly made advances this summer, they won’t be the last club to do so.

Sadio Mané: “I cried like a kid when I left Metz.”