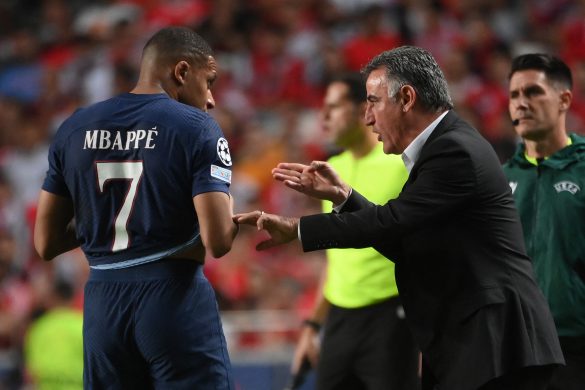 Speaking on Rothen S’enflamme, Paris Saint-Germain manager Christophe Galtier has said that Kylian Mbappé is not bigger than the club.

Mabppé made the decision to remain at the Parc des Princes this summer. Faced with a decision to stay in Ligue 1, or join Real Madrid on a free transfer, he chose the former. It has since been revealed that multiple actors, including French President Emmanuel Macron, spoke with the forward and influenced his decision.

However, despite remaining in the French capital, it hasn’t been smooth sailing for the player, nor for the club. Whilst on international duty in late September, Mbappé claimed that he preferred the freedom of playing with the national team, in contrast to a lack of freedom at club level.

Soon after, reports emerged that Mbappé felt “betrayed” and that he was looking for an immediate exit from the club. Those rumours have dampened for now. Reacting to the controversies, Galtier has said that Mbappé isn’t above the club.

“It’s false (that he’s above the club). Kylian made a difficult decision. He loves PSG, but he had an attentive eye at another big club, Real Madrid, as well. He made the decision to stay. That’s a good thing for Ligue 1, for his teammates, for PSG and for me. Is he above the club? No, that’s false. He personifies the project; you can’t doubt that. When I say that, I’m not saying he’s above the club. He is at the same level as the other players.”