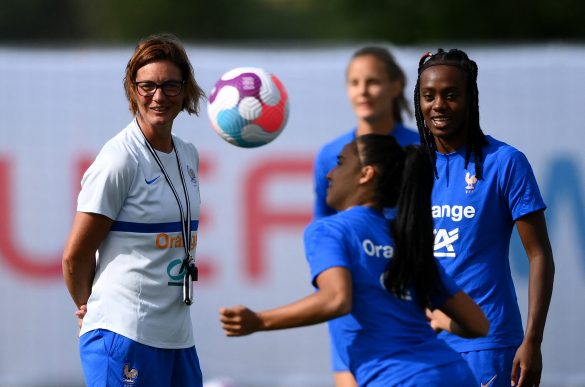 Ahead of this evening’s match between France and Italy in the Women’s Euros, the manager of Les Bleues spoke to L’Équipe about the upcoming tournament in England, her tenure over the last three years and France’s supposed ‘quarter-final curse’, which has seen them fall at the first knockout stage in all of the previous three editions of the tournament. Diacre is reputed for her ruthless management style, which has put a number of players on edge in the past, including Amandine Henry and former goalkeeper Sarah Bouhaddi. She similarly came under significant criticism after France’s disappointing exit from the 2019 World Cup, having not selected star striker Marie-Antoinette Katoto.

What’s your state of mind going into the Euros and have you changed your approach compared to 2019?

I’m very well. We have prepared very, very well for this competition with my staff and the players. We don’t look in the rear-view mirror, only ahead, so no comparison is possible with what has happened in the past. We work with other people too, so things are absolutely not comparable.

The level of your opponents in preparation invites questions (Cameroon 4-0 and Vietnam 7-0). Do you fear a lack of rhythm at the start of the Euros?

We will be ready on July 10th. We worked hard defensively despite everything, against Vietnam for example, with the loss of possession. I saw some very interesting things.

Italy drew against Spain in their warmup. What do you think of your first opponent?

It’s a team who did not have a lot of possession, but got a good draw. An ultra-defensive formation, with offensive assets too in transition. We will adapt.

What do you say about the idea your group is easy?

Everyone is free to think what they want. For us, we’re here to play three group matches against teams you have to take seriously.

The glass ceiling of the quarter-finals has frustrated France for 10 years. What will make the difference this year?

The team, this year, wants to work step by step and doesn’t want to get the wrong goal. Firstly, the team has to perform in the group stages. Then, we will adapt according to the next knockout matches, to reach our goal, which is the final.

You have greatly reshaped the team in the last three years. Have you been able to complete your ideas?

I make choices, always in my soul and my conscience. All that for the good of the team and not for my personal interest. Everything is done for the team, to try to bring home the first trophy that the Féderation lacks so dearly.