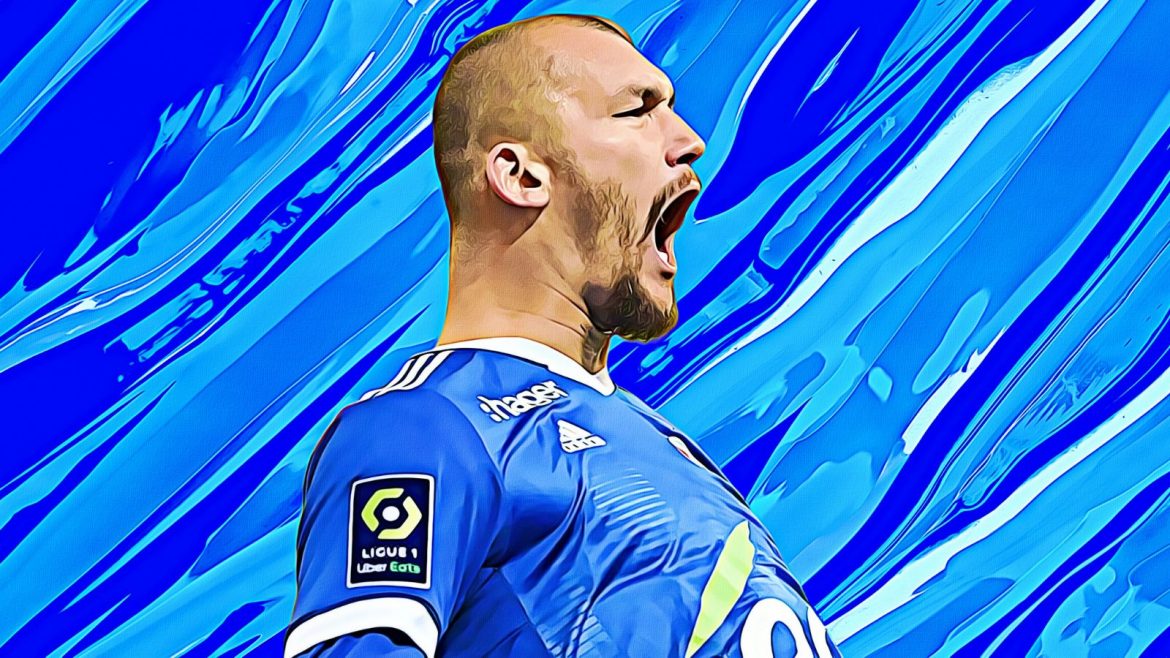 Strasbourg’s 6’6 man up top was the subject of much interest this summer. Despite two years left on his current contract with the Alsatian club, it seemed almost certain for much of the transfer window that the 28-year-old French centre forward would be leaving La Meinau. Yet, despite interest from within France, the Bundesliga and even a handful of Premier League sides, Ajorque started the 2022/23 season as a Racing player.

Ajorque was born on the island of Réunion, a French overseas territory located around 500 miles East of Madagascar. Ludovic is of both Réunionese and Malagasy descent, and was approached by the Madagascar national team in 2018 to represent them but the player declined to switch allegiances away from France, claiming that he would rather concentrate on club football. The Ajorque family has some pedigree in the sport. Ludovic’s father, Jean-Noël, played for the Lens reserve side between 1990 and 1994 before spending the rest of his career at home in Réunion.

The younger Ajorque, meanwhile, arrived in Metropolitan France in 2012 when Angers took a chance on the then 18-year-old forward. At 20, he signed his first professional contract with Le SCO, however, he would only ever play once for the club – a first-round Coupe de la Ligue tie. A pair of loans followed. Firstly to Le Poiré-sur-Vie VF then to Luçon VF, both third-tier clubs at the time. Despite how far the striker has come since then, incredibly, by his 22nd birthday he was yet to make a single appearance in the top two tiers of French football.

In the summer of 2016, Ajorque transferred to then-Ligue 2 club Clermont Foot for an undisclosed fee. In his first season, he scored five and assisted four goals in 28 league appearances, helping the Auvergne club to a mid-table finish. The following season he was a lot more prolific. In 36 games he managed 14 goals and three assists, making him the sixth-highest goalscorer in Ligue 2 that year. That impressive season earned an opportunity to play Ligue 1 football with Strasbourg, where he now begins his fifth season leading the line.

Notably, Ajorque holds the record for the quickest brace scored in Ligue 1 during a 2-2 draw with Lyon during the 2018/19 season, only needing 103 second-half seconds to score twice. Ajorque’s goal-scoring ability has gone slightly under the radar for a while now. In his first 145 games for Racing, he managed 51 goals and 19 assists, averaging a goal contribution every 154 minutes. For a club that, discounting last season’s shock push for Europe, historically finishes in lower mid-table, it’s a more than decent return. This record would look even better were it not for his minor goal drought at the end of last season.

It’s not only his scoring record that impresses. Ajorque has the ability to bring the best out of his teammates too. Speaking to Téléfoot in 2021, teammate Adrien Thomasson said: “He’s an altruistic player, who doesn’t just think about his own statistics.” This is backed up by the striker’s eight assists in 31 starts last season and his 29.88 attempted passes per 90 minutes. Thomasson also highlighted his partner’s work rate and willingness to defend: “There’s also his way of giving it all, defending for the team. He’s the first to press and the first to come back and defend.” According to FBRef, Ajorque averages 0.99 clearances per 90 minutes, meaning he’s among the top 17% of attackers in Europe’s top five leagues, and 1.23 tackles per 90, putting him inside the top 11%. Being 6’6″, he’s also an asset at set-pieces, both on attack and defence. He wins 5.14 aerial duels per 90, ranking him in the top 10% of attackers across the continent.

This summer, after a disappointing end to the club’s charge into Ligue 1’s top six, one of the stories of the season, it seemed as if Ajorque, along with a few of Strasbourg’s other key men, would be heading for the exit door with the club keen to turn a profit on their form players before their contracts expired. However, only a few fringe players ended up leaving. Ludovic was reportedly scouted by numerous higher-profile clubs including Everton, Wolves, West Ham, Newcastle, Nottingham Forest, Hertha Berlin and Stuttgart. The sticking point for each club seemed to be Strasbourg president Marc Keller’s €15m asking price. It was reported by local newspaper Alsa’Sports that, in the final few hours of the transfer window, Stuttgart offered €10m, which Keller declined.

If any club were still interested in ‘Le Volcano Bomber’, as the Strasbourg fans have affectionately named him due to his Réunionese roots and his hard-man looks, his market value is currently around £12m according to Transfermarkt, and, with the end of his contract in sight as well as him struggling to find the same form of recent seasons amid injuries since the summer, if Stuttgart or any other club were to put another €10m on the table in January, Keller and the board could be persuaded to sell.