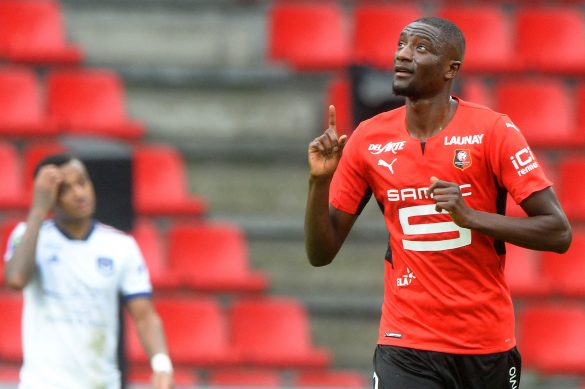 According to L’Équipe Everton are currently studying the possibility of signing Stade Rennais striker Serhou Guirassy (26) to bolster the Premier League side’s forward options after selling Richarlison to Tottenham Hotspur and Dominic Calvert-Lewin picking up a knee injury which rules the striker out for 6 weeks.

Guirassy, who is under contract at Rennes until 2025 comes off the back of a solid season in Ligue 1 despite a limited amount of game time – scoring nine goals in Ligue 1. In his all time record at Rennes, where he joined from Amiens in 2020, the Guinea international has scored on 25 occasions over 79 appearances for the Ligue 1 side.

This includes Rennes’ run in the Champions League, in which they faced Frank Lampard’s Chelsea – where Guirassay performed well and managed to hit the back of the net during the home fixture in France. Rennes were one of Ligue 1’s highest scorers last season where Guirassy would often deputise for main striker Gaëtan Laborde.

The former Laval and Lille man picked up an ankle injury mid-way through the season which saw his game time slashed, but otherwise performed well for Les Rouge et Noir. Everton are also considering a move for Strasbourg’s Ludovic Ajorque.